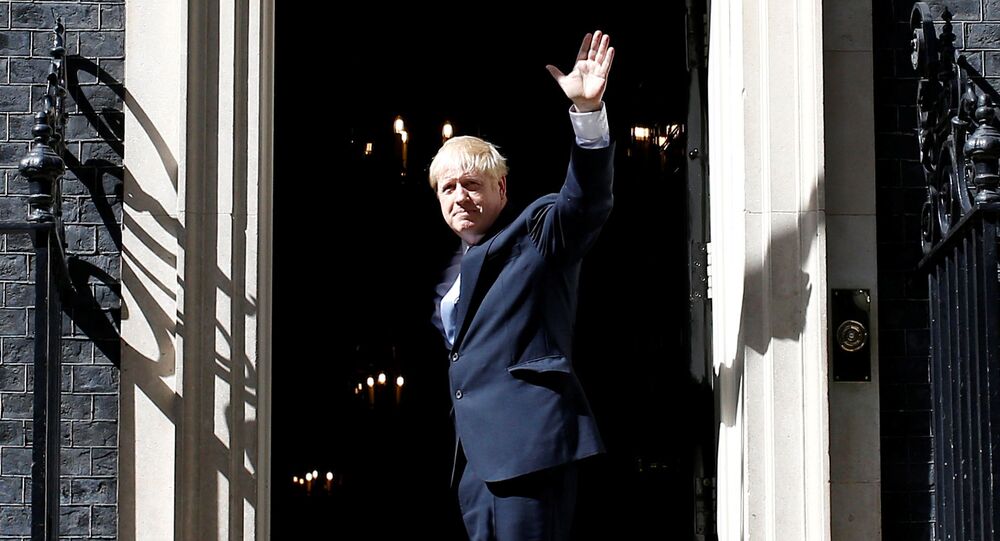 Back Door Boris – Phoney PM Can Run But Not For Long

Yesterday I was proud of both my country and my First Minister. The fake Prime Minister of the UK, elected by less than one 1% of the 46 million registered voters, sought to charm a part of the British union which has rejected his party and his politics consistently over the last 64 years with a secretive and swift visit to Scotland.

His arrival in Edinburgh city centre outside Bute House, the official residence of the First Minister, was met with a cacophony of boos and derogatory chants from the several hundred Scots who had gathered at very short notice to express their disapproval for a democratically illegitimate PM who has consistently disrespected Scotland and displayed the pompous, racist and condescending characteristics we have grown to expect from the privileged self-obsessed minority who travel through the Eton and Oxbridge corridors that reek of entitlement and advantage.

Our First Minister, Nicola Sturgeon, conveyed the feelings of the nation with body language that screamed contempt for the visiting buffoon who had somehow manoeuvred himself into a position of authority far beyond his intellect, capability or moral values.

The serial liar who reached out to shake her hand on the steps outside the Bute House residence embodies the worst excesses of British national bigotry, chauvinism and exceptionalism. The man who posed alongside a bus emblazoned with a cruel and conscious lie about the NHS losing £350 million a week due to EU membership and who stated on National TV that Turkey was days away from being accepted into the EU has no moral compass. His Tory leadership election pitch was Brexit delivery and more tax cuts for millionaires at the expense of the millions. Nicola offered only a perfunctory hand before ushering him inside with the contemptuous distrust he deserved.

After a short and terse exchange during which Nicola challenged Johnson to a live TV debate on the issue of Scottish independence and reiterated Scotland’s inalienable right to express her opinion on the continuation of the British union or not Boris scurried out the back door of Bute House to avoid any further contact with the hundreds of protesters waiting outside the front door. Security was proportionate and Johnson was under no physical threat but his gigantically over-inflated ego couldn’t stand anymore knocks so he sneaked out the back door and into a new and fitting identity that will haunt him forever more - #BackDoorBoris.

The footage of Johnson arriving outside Bute House in Edinburgh yesterday and being roundly booed and abused will be played over and over again in future documentaries which explain the collapse of the British union and the emergence of a strong and independent Scotland forging close and cordial ties with her closest neighbour England. Instead of an exploitative master/servant relationship an independent Scotland will forge a friendly and mutually respective relationship of equals with England in the future. What Johnson’s elevation to Prime Ministerial status indicates clearly, however, is that the British Union, which has survived long past any semblance of usefulness, is in its final stages of existence.

Boris Johnson is the quintessential Emperor with no clothes. The man who has sat at the heart of a Government that has condemned 120,000 to premature deaths through brutal welfare cuts while lavishing the rich with more benefits wants us to forget the last decade of Tory austerity and see him as some new white Knight. He is no white Knight but a devious schemer who has applauded every public service cut and the lowering of living standards of millions. He championed the bedroom tax for the poor and disabled to pay for tax cuts for the millionaires and privileged. He served in the government that has been branded “harsh”, “uncaring” and “cruel” by two independent United Nation Reports into austerity in Britain. His rhetoric about “uniting Britain” rings empty in the ears of the 14 million stuck in a swamp of poverty caused by his party’s savage public spending cuts designed to pay for the trillions required to bail out the bankers.

Never forget Johnson boasted about doing more to defend the bankers than anyone in the political frontline. While Corbyn was condemning the greed, avarice and irresponsibility of the bankers which led to the economic crash of 2008/9, Johnson was defending them. Austerity was always nothing more and nothing less than punishment of the poor and low paid for the greed and mistakes of the rich and Johnson was an austerity cheerleader over the last ten years.

Johnson declares he will get an acceptable Brexit deal sorted in the next 90 days despite his predecessor failing to get one in the last 900 days. He is lying again. He is planning for a no deal Brexit and the uncertainty that undoubtedly will bring to millions of workers but he and his millionaire cabinet chums don’t give a damn about uncertainty. Whatever happens they will be all right with the insulation afforded to them by their vast personal wealth stores.

The reality is a General Election in November now looms large. Back Door Boris will be able to do nothing about the Northern Ireland Backstop, and the 27 countries signed up to the existing deal on the table will not budge just because Boris bumbles and blusters in their faces. Johnson is preparing for a General Election after Parliament rejects his no-deal exit proposal. He will fight an election hoping to sweep up Brexit supporting votes from both the Labour party and the Brexit party. He will seek to make it a Brexit General Election and pretend to be on the side of democracy and the people. Irony doesn’t get any better. A privileged millionaire elected by less than one percent of the population will seek to portray himself as the man of the people and democracy.

The truth is Corbyn’s Labour Party has both a great challenge and an opportunity. Many opponents of the undemocratic nature of the EU on the left, including me, support leaving an institution which is anti-socialist and anti-democratic. There is a strong and cogent socialist case for leaving the free market champion which the EU has become. Many point to the incredible result Corbyn achieved in 2017 with a 10% swing to the Labour Party, the largest since 1945. That Manifesto contained a commitment to execute a Labour Brexit which protected workers’ rights among other things. However it also contained scores of radical commitments on reversing austerity cuts, redistributing wealth via top rate tax increases and wholesale public ownership plans to reverse the disasters caused by Thatcher’s sell-off of the UK’s ‘family silver’ of energy, transport, water and other industries in the 1980’s. If Labour fights the inevitable November General Election with a commitment to opposing No-Deal Brexit and putting the issue back to the people will they lose more than they gain?

In Scotland the picture is clearer. Although many independence supporting socialists like me oppose the EU we accept EU membership is a question less important than independence and a Tory austerity-free Scotland. The chance to promote socialist policies of properly funded health, education and welfare services in an independent Scotland while serving an eviction notice on the immoral and illegal nuclear weapon arsenal based in Helensburgh near to Glasgow is much more of a priority than leaving the EU. In an independent Scotland we can engage in the important debates on EU and NATO membership but until we get there it amounts to hot air discussions.

In England and Wales I hope the absolute necessity to stop and reverse Tory austerity to defend and improve essential public services like health, education, elderly care and welfare will weigh much more in the minds of ordinary working people than Brexit. After a Corbyn Labour government is elected and tries to implement their public investment and public ownership programme conflict with the EU will inevitably follow and EU membership will once again be raised, but for the sake of ordinary lives and living standards a Corbyn Government inside the EU would be far better than a Johnson Tory Government outside the EU.

The SNP with their independence anti-austerity, anti-Trident, pro-NHS and anti-Brexit platform will secure a massive General Election victory and rise from 35 seats to over 50 of the 59 up for grabs. I will support them in Scotland but endorse Corbyn in England and Wales regardless of the Brexit stance they adopt because their anti-austerity and pro-NHS and fair taxation platform is more of a priority than Brexit. Showing #BackDoorBoris the back door at the ballot box is the priority and that means voting SNP in Scotland and Labour in England and Wales.