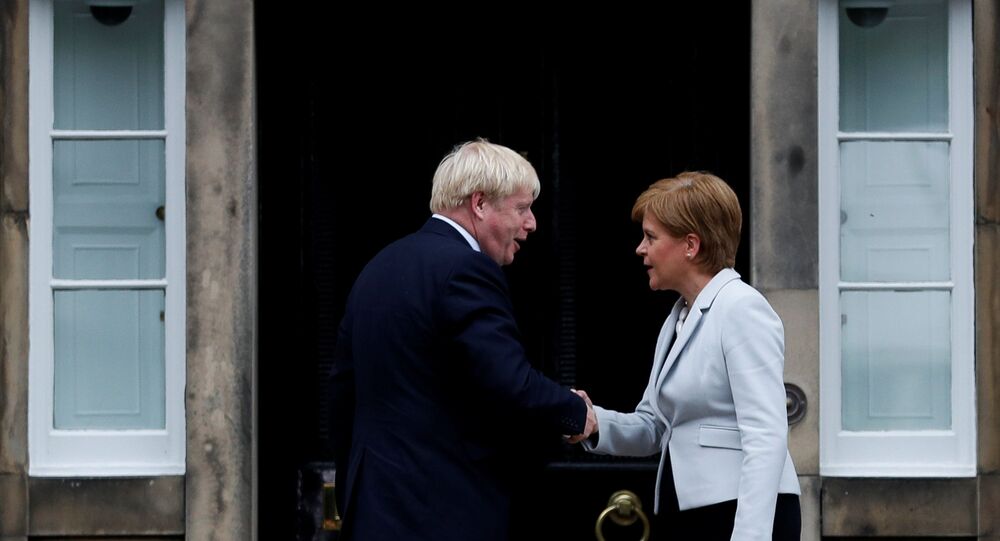 The heckling came after Mr Johnson said during his first visit to Scotland as Prime Minister that the Scottish independence referendum, which took place in 2014, was a “once-in-a-lifetime, once-in-a-generation thing".

Boris Johnson booed as he meets Nicola Sturgeon, a meeting which reportedly Ruth Davidson advised him not to hold here https://t.co/L6ZTvaV6Ay

​The news comes as Scottish and Welsh resentment has grown over Mr Johnson's ascent to power and Brexit plans, as well as Westminster's handling of Brexit overall.

"It was on that basis that they cast their votes and I think it would be totally wrong now to break that promise to the people of Scotland and the UK and have another referendum," Mr Johnson  said in a reference to the second Scottish referendum during the visit to a naval base in Faslane, near Glasgow.

Boris Johnson has pledged to have the UK leave the EU by 31 October, the Brexit deadline, and has stated that while he wants a deal, he is ready to leave the EU without one should Brussels refuse to negotiate. The newly appointed PM also launched a £100m no-deal Brexit campaign to ease tensions between the UK's four countries, including Northern Ireland, Scotland and Wales.

But despite Mr Johnson’s visit, where he pledged to spend £300m to boost economic growth across the UK, Scottish first minister Nicola Sturgeon blasted his initiative in a letter last week stating that she wanted her country to have an “alternative option” such as a second referendum on Scottish independence. Wales also hosted its own marches in May and July in Cardiff and Caernarfon, respectively, where Scottish and Welsh activists demanded to leave the UK amid Boris Johnson's appointment to No 10 and the government’s handling of Brexit.