UK Labour leader Jeremy Corbyn has come under fierce neocon attack over a tweet he published saying that ‘without credible evidence about the tankers attacks, the government’s rhetoric will only increase the threat of war’.

His comments which included a very reasonable call for Britain to ’act to ease tensions in the Gulf’, were branded ’pathetic‘ by UK Foreign Secretary and Tory leadership hopeful Jeremy Hunt. Michael Gove, another leadership contender, tweeted ‘Jeremy Corbyn’s comments on Iran show once again he is not fit to be trusted with our national security. Time and time again he has refused to stand up for our values of freedom and democracy. We must make sure he never reaches Downing Street‘. Another Tory MP, Tom Tugendhat, accused Corbyn of ‘doing propaganda’ for ‘the Iranians’.

With this single tweet @jeremycorbyn shows why he’s utterly unsuitable to be British PM. Wanting to see ‘credible evidence’ from our closest ally?! With ‘Cautious Corbyn’ in charge we’d never have attacked Iraq in 2003 & would have faced total wipeout from Saddam’s WMDs. #sarcasm https://t.co/dYjHlSrr8Q

​For Corbyn’s critics, it’s as if the Iraq War never happened. As in 2003, we are expected to fall into line and accept unquestioningly the claims of a right-wing US administration, packed to the gills with rabidly pro-war neocons.

© AFP 2019 / AHMAD AL-RUBAYE
US soldiers stand near the landmark "Hands of Victory", built by executed Iraqi president Saddam Hussein to commemorate Iraq's victory in the Iran-Iraq war, inside Baghdad's Green Zone as they prepare to go on a mission on July 5, 2008

Sixteen years ago, ‘evidence’ was put forward by the US that Iraq possessed WMDs which threatened the entire world. Anyone doubting such ‘evidence’- and who can ever forget Colin Powell’s presentation at the U.N.- was branded a ‘Saddam apologist’ or an ‘appeaser’.

Yet incredibly, despite the no-show of those deadly WMDs that we were assured existed by the ’intelligence community’ and the leaders of the US and UK, and the deaths of one million people in the subsequent conflict, we‘re back to the same scenario today only this time it‘s Iran and not Iraq that‘s being accused. Do the neocons not think our memories go back as far as 2003?  Are we supposed to forget the lies we were told then?

It’s not just the experience of Iraq and those non-existent WMDs that makes Corbyn’s caution sensible. Those of a certain age will remember the Gulf of Tonkin incident which led to greater US involvement in the Vietnam war.  We later learnt it was a 'false flag' operation,  but consider how many millions were killed because of it. Consider too what happened in Libya, another MENA country which western military intervention effectively destroyed. In March 2011 we were told that we had to bomb because Colonel Gaddafi was going to massacre the citizens of Benghazi.

Again, if you questioned this claim you were branded a ‘Gaddafi apologist’. Five-and-a-half years later, the truth was allowed to come out.  A House of Commons Foreign Affairs Committee report held that “the proposition that Muammar Gaddafi would have ordered the massacre of civilians in Benghazi was not supported by the available evidence… the Government failed to identify that the threat to civilians was overstated and that the rebels included a significant Islamist element.”

It’s worth pointing out that unlike his detractors, Jeremy Corbyn opposed the military interventions against both Iraq and Libya. Yet despite his record of being proven right- consistently right- on matters of war and peace, it is he who is treated like the crackpot and not those who urged us to take part in wars of choice which caused enormous devastation and greatly boosted the cause of international terrorism.

Of course, it could be that Iran was responsible for the attacks on the two oil tankers last week. 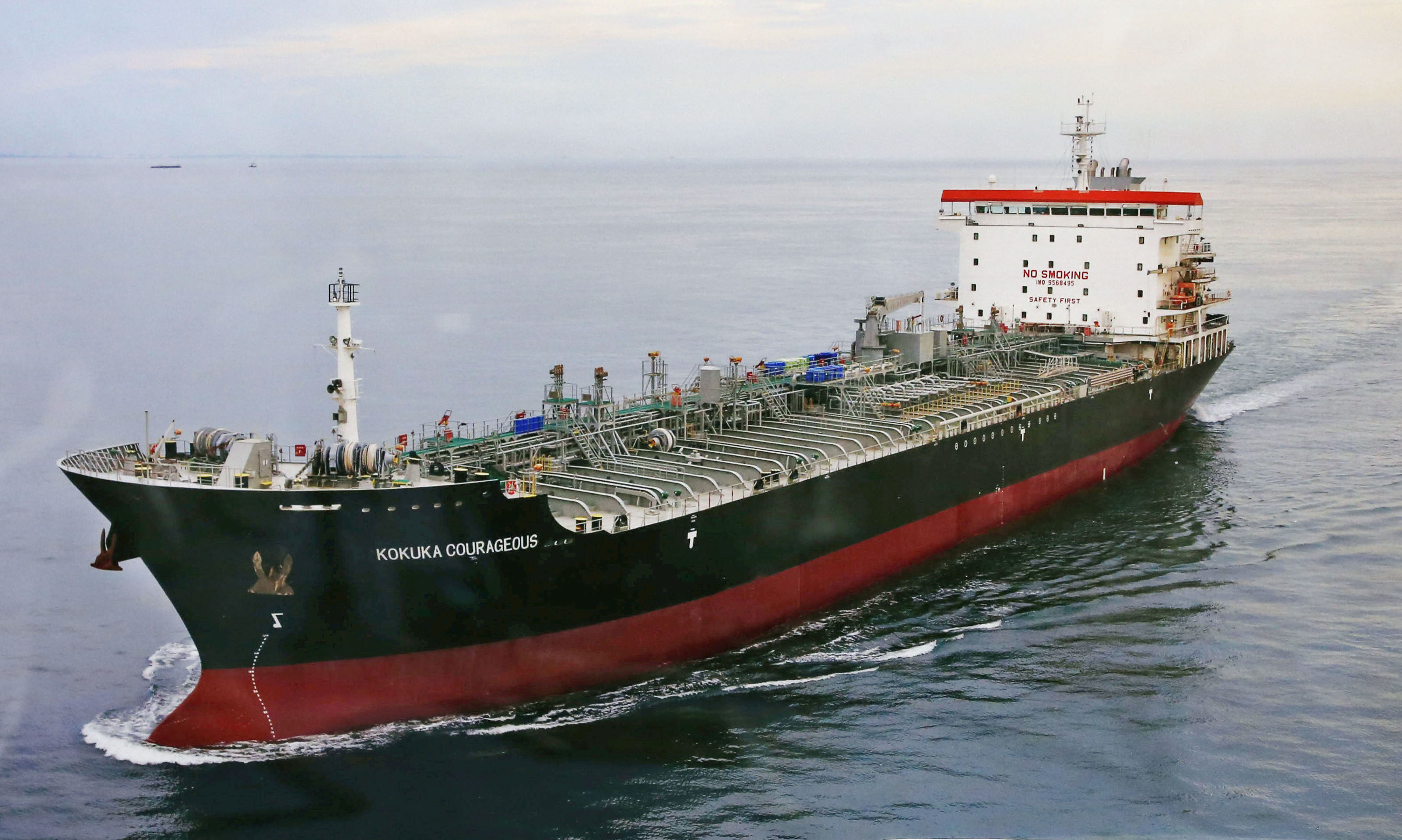 © REUTERS / KYODO Kyodo
A picture of the Kokuka Courageous, one of two that were hit in suspected attacks in the Gulf of Oman, is displayed during a news conference by the ship owner Kokuka Sangyo Ltd. at the company office in Tokyo, Japan June 13, 2019, in in this photo released by Kyodo

But at the very least the lessons of the past twenty years or so, and the testimony of General Wesley Clark (no relation), who said that the US was going to ‘take out’ seven countries ‘starting with Iraq, and then Syria, Lebanon, Libya, Somalia, Sudan and, finishing off, Iran.” should make us skeptical about the current claims. Rather than being lambasted for wanting to see ‘credible evidence’ of Iranian involvement, as indeed any sane person would require before rushing to action, Corbyn should be praised.

Any war with Iran, whether it be air or ground led, will make Afghanistan and Iraq look like resounding successes.
The human destruction and economic impact will reverberate around the world.#NoWarWithIran pic.twitter.com/tRQFgsGK8D

​It’s those who tell us that we should just blindly accept the line taken by ‘our closest ally’, who should be berated, especially as a further escalation of tensions in the Gulf could easily lead to a major conflict with catastrophic repercussions for the region and the entire world. Too late then to say, amid the rubble,  ‘Actually Jeremy was right. He wasn’t being pathetic. If only we’d listened to him and not the hawks’.