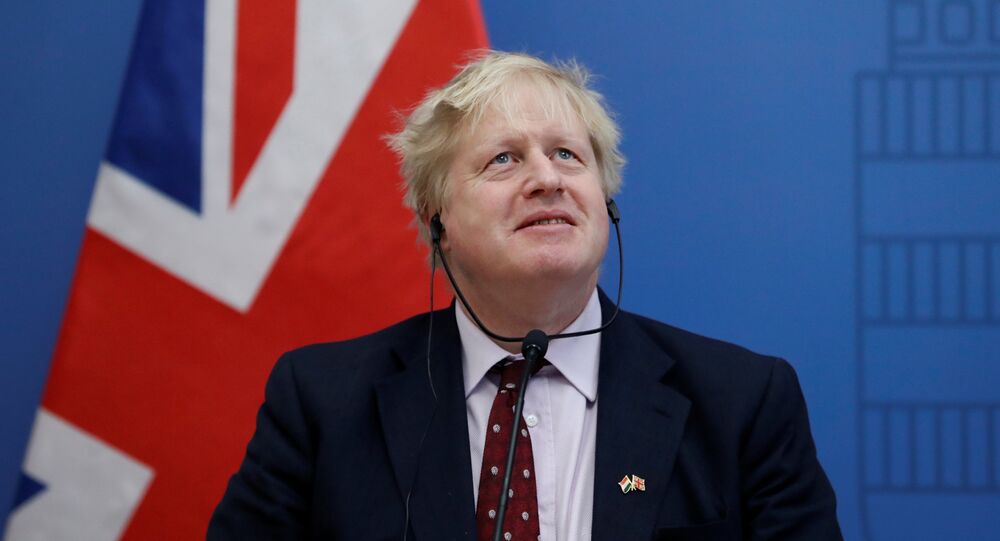 So goes the famous English nursery rhyme for children, which applies aptly to the hubristic and accident-prone Foreign Minister Boris Johnson.

The buffoonish Johnson – who has an unenviable reputation for making cringing public gaffes – was this week spectacularly caught out telling lies about Russian responsibility for an apparent nerve agent attack in England last month.

Appropriately enough, Labour leader Jeremy Corbyn accused Johnson of “having egg on his face” after it emerged that the foreign minister has been making grave accusations against Russia without the scientific proof he had been earlier boasting to have.

Now the world and British allies in particular are beginning to see that they have been taken for fools by the clownish top diplomat from Britain. Led down a wild-goose path of marshmallow toadstools and lemon-drop fizzy bombs, based on his assertions. Only the consequences for conflict with Russia due to Johnson’s fairytales are far from amusing.

© AFP 2021 / Ben STANSALL
Skripal Incident Likely a False Flag Attack by UK to Vilify Russia – Journalist
Last month, Johnson made highflown claims that British intelligence was categorical in pinpointing blame on Russia over the apparent poisoning of a former Russian spy living in exile in England. Sergei Skripal (66), who had been exiled to England as a traitor some eight years ago, was found in a collapsed state in a public park along with his adult daughter, Yulia, on March 4.

Yulia (33) has reportedly made rapid recovery while her father is also said to be out of critical condition.

Russia has strenuously denied any involvement in the apparent attack on the Skripals, which the British authorities conjecture was an assassination attempt in revenge for Sergei Skripal’s past betrayal to Britain’s MI6. Skripal had been previously jailed in Russia for his treasonous crimes. Moscow claims it had no further interest in the disgraced spy. Significantly, he had lived in England quietly with no threats from Russia.

Within days of the incident in Salisbury, the British government suspiciously rushed to claim that the purported nerve agent was identified as a Soviet-era chemical weapon.

© REUTERS / Peter Nicholls
UK Foreign Office Refused to Provide Russia Samples of Nerve Agent Used to Poison Skripal - Russian Embassy
Boris Johnson has been the most vocal and gung-ho minister among the British cabinet in attributing blame to Russia. It was Johnson’s vigorous “briefing” of other foreign governments that led to some 25 European Union and NATO member states expelling nearly 150 Russian diplomats at the end of last month. That move dramatically escalated international tensions between the West and Russia – with some observers saying relations have deteriorated to the worst levels of the old Cold War.

Turns out though that the head of Britain’s warfare laboratories at Porton Down publicly admitted this week that the scientists had not in fact confirmed the nerve poison used against the Skripals was sourced exclusively from Russia.

READ MORE: How the Ex-Spy Case is Transforming UK Media Into Orwellian 'Ministry of Truth'

Last month, Boris Johnson claimed that the Porton Down scientists had told him categorically that the alleged chemical weapon was from Russia. That has been the cornerstone of the British case against Russia.

However, this is not true, according to the Porton Down scientists this week. They say they did not identify the chemical as exclusively Russian, as the British diplomat had been claiming.

Johnson has thus been caught out misrepresenting what the scientists told him. They say that the chemical weapon detected was of a type synthesized years ago by the Soviet Union. They did not say they could pinpoint the military-grade nerve agent allegedly used against the Skripals as originating from Russia.

In short, the British foreign minister has been telling lies and agitating international tensions against Russia with allegations that are unproven.

As further indication of Britain’s nefarious role, its Foreign Office deleted a public comment made earlier blaming Russia. That knee-jerk deletion followed immediately the admission of the British scientists denying they had detected Russian origin of the alleged nerve poison.

© REUTERS / Peter Nicholls
West Uses Skripal Row to Boot Russia From Syrian Chemical Weapons Issue - Moscow
On the back of British “briefings” implicating Russia in the apparent poison attack in Salisbury, the United States expelled 60 Russian diplomats in a show of “solidarity” with Britain. Likewise, other countries followed suit. Germany, France, Canada and Australia, among others, have joined in the madcap British rush to find Russia guilty without any evidence.

Moscow has reciprocated by ejecting dozens of envoys. The mounting tensions between Western states and Russia is deplorable, especially given that the whole spy-poisoning affair seems to have been recklessly politicized by British authorities making sensational claims against Moscow.

This week at the United Nations Security Council, Russian envoy Vasily Nebenzya slammed Britain for making up “fake news” against Russia over the Salisbury incident as a way to “delegitimize” his country. The Russian diplomat warned “Britain was playing with fire” and would end up being disgraced for hamming up dramatics.

That is exactly what has been going on in a nutshell. The whole saga is a charade which has been used by Britain and a dutiful mass media to fabricate a bogey-man story against Russia. This is all part of an ongoing campaign of demonization waged against Russia by the US-led NATO military alliance, which has accelerated in recent years.

The Americans and the British in particular cannot tolerate the idea that their ability to launch wars and subversions in any part of the planet is no longer feasible – largely because of a resurgent Russia under President Vladimir Putin. Their schemes for global lawlessness and imperialist manipulation have been thwarted in Georgia, Syria and Ukraine.

© REUTERS / Peter Nicholls
UK Envoy to UN Speaks About Skripal Probe, Russian Diplomats' Access to Yulia Skripal
Out of irate frustration, the US, Britain and their NATO cronies must bring Russia down. This cannot be done militarily, so the war shifts to information, propaganda, economic and political sanctions.

The whole Skripal fiasco is doughty-little-Britain’s contribution to the information war against Russia. And to a degree, the British nearly pulled off a media coup with their James Bond-style claims of a poison-assassination plot in Salisbury. The damage done to international relations has been impressive.

But then along comes Humpty Dumpty Boris Johnson. This is the upper-class twit who as foreign minister has insulted countries with racist jokes and downright crass stupidity. He reportedly gave a cabinet “briefing” on the war supposedly in Yemen, but repeatedly referred to the country as Lebanon.

© AP Photo / Andrew Matthews
Johnson Accuses Moscow of Attempts to Undermine OPCW Probe Into Skripal Case
Instead of trying to bring down Russia, Boris Johnson has fallen off his perch through his own lies and incompetence. The cracks in the British allegations against Russia are beyond repair after his exposure this week as a barefaced liar.

Anyone taking Boris Johnson as a credible source does so that their own peril. It would be like using a book of nursery rhymes as a guide to understanding world affairs.

Someone ought to smack Johnson over the head with a giant rubber spoon and haul him off to a solitary kindergarten before he does any more damage to international relations.