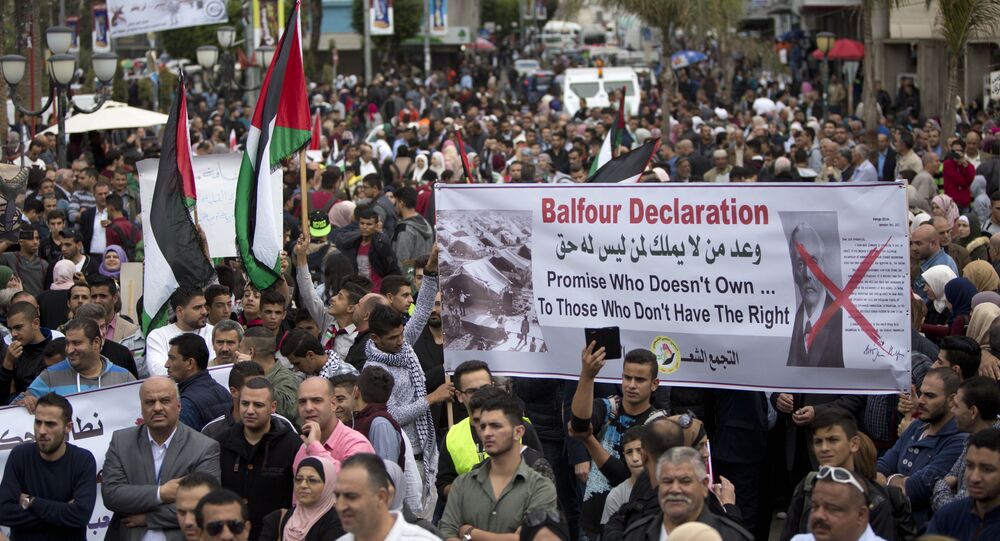 The Ignoble History and Legacy of the Balfour Declaration

On 2 November 1917 the British government in the form of the country's then foreign secretary, Sir Arthur Balfour, addressed a letter to Lord Rothschild, a leading figure within the British Jewish community.

In terms of its significance and impact this brief letter, known to the world as the Balfour Declaration, remains unsurpassed. Depending on your point of view it enjoys a place in history as the catalyst of Jewish salvation, leading to the establishment of the State of Israel in 1948, or the cause of the unremitting injustice and suffering and endured by generations of Palestinians.

In the letter Balfour writes:

"His Majesty's Government view with favor the establishment in Palestine of a national home for the Jewish people, and will use their best endeavours to facilitate the achievement of this object, it being clearly understood that nothing shall be done which may prejudice the civil and religious rights of existing non-Jewish communities in Palestine, or the rights and political status enjoyed by the Jews in any other country."

The stance enshrined in these words — involving the government of a European state arrogating to itself the right to hand over part of the land of another people to a third people without bothering to ask or consult said people — is staggering in its iniquity. It bespeaks the injustice upon which the British Empire rested and the country's engagement with the developing world, one rooted in domination, exploitation and naked self-interest.

Compounding the egregious character of this history is the fact that Britain's engagement with the developing world continues on much the same basis today, and will continue to until it acknowledges the wrongs committed in its name, such as the Balfour Declaration of 1917. Sadly, given the recent statement of the country's Foreign Secretary, Boris Johnson, marking the centenary of Balfour, no such acknowledgement will be forthcoming anytime soon.

On the contrary, Johnson announced that the "Balfour Declaration was indispensable to the creation of a great nation. In the seven decades since its birth," he declared, "Israel has prevailed over what has sometimes been the bitter hostility of neighbors to become a liberal democracy and a dynamic hi-tech economy."

Here we have a perfect example of the revisionism that passes for truth in the hands of a British establishment intoxicated with its own myths. Israel's supposed greatness has been established on the back of the dispossession of a people whose only crime was to live on a land coveted by a people whose undoubted poor and anti-Semitic plight in Europe since time immemorial had absolutely nothing to do with them. As for "the bitter hostility of neighbors," critics of Israel would no doubt make the point that this particular claim conveniently abstracts the expansionist and aggressive actions of the country throughout its short history, not only where the Palestinians are concerned but also in its two invasions of Lebanon to its north, its refusal to vacate Syrian national territory of the Golan Heights, seized during the Six-Day War in 1967, and its saber rattling towards Iran.

In his book to mark the centenary of the Balfour Declaration, author and historian Bernard Rogan sets out in forensic detail the wider regional, international and geopolitical context and implications involved in its formulation.

"Imperialist interests were evolving from a focus on territorial acquisition and the retention of colonies to the control of natural resources, restricting access to trade routes or markets and generally inhibiting the economic development of others in the region," Rogan writes.

Arriving at a serious analysis of Balfour it is vital to consider its relationship to the equally infamous Sykes-Picot Agreement of 1916, under whose provisions Britain and France agreed the carve-up of the Ottoman Empire in the Middle East in the anticipation of its collapse upon the eventual defeat of the Axis Powers in the First World War.

For the British, securing and defending access to the Suez Canal, a major sea route for goods passing between Britain and the jewel in the crown of its empire, India, was a burning priority. In this regard asserting and maintain control of Palestine was crucial.

© REUTERS / Amr Abdallah Dalsh
A general view of the Suez Canal from Al Salam "Peace" bridge on the Ismalia desert road before the opening ceremony of the New Suez Canal, in Egypt
Thus in granting Palestine as a home for the Jewish people, the British government had in mind a loyal proxy, in the form of a Zionist movement, willing and able to protect its interests in the region. Someone who was in no doubt of its advantages was Winston Churchill, declaring during this period that "if, as it may well happen, there should be created in our lifetime by the banks of the Jordan a Jewish state under the protection of the British Crown… an event would have occurred in the history of the world which would… be in harmony with the truest interests of the British Empire."
© AP Photo /
More Than 12,000 Sign UK Petition Demanding Apology for Balfour Declaration

The Zionist movement, inspired by Theodor Herzl, needed the support and patronage of a major imperial power in order to achieve its objective of a Jewish state. Interestingly, prior to Palestine being decided on by the Zionist movement as the intended location of such a state, Cyprus and Uganda were also briefly considered as viable options as locations for the establishment of a Jewish state.

In the wake of the First Zionist Congress in 1897, Herzl traveled across Europe, approaching the Ottomans, Germans and Russian governments, as well as the British, in an attempt to win support for his project. Though he died in 1904, thirteen years before his dream of a Jewish state began to come to fruition with the Balfour Declaration, Theodor Herzl is still revered as the founding father of the State of Israel by Jewish people in Israel and both Jewish and non-Jewish supporters of Israel throughout the world.

However there are some Israelis who take a different view of Herzl's legacy and the Balfour Declaration. One of them is the historian Avi Shlaim: "Britain had no moral right to promise a national home for a tiny Jewish minority in a predominately Arab country," Shlaim writes.

"It did so not for altruistic reasons but for selfish and misguided ones… the Balfour Declaration was a colossal blunder — it has proved to be a catastrophe for the Palestinians and it gave rise to one of the most intense, bitter and protracted conflicts of modern times."