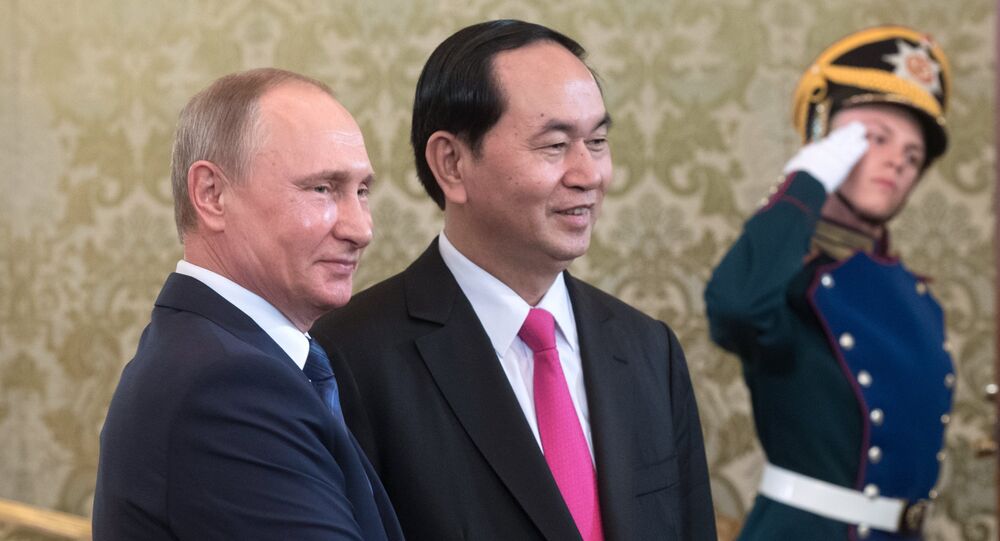 The Vietnamese Absolutely Love Russia, and Here's the Proof

Moscow's Soviet-era ally has proudly retained its love for Russia all throughout the post-Cold War period and even into the New Cold War, showing that the Vietnamese have a sincere fondness for all things Russian and strive to strengthen the historical relationship between their two states.

The US polling agency Pew Research Center released an extensive report detailing how people all across the world view Russia and President Putin nowadays, and Vietnam was found to be far and beyond the most Russia-friendly country out of all of those that were surveyed. It should be said, though, that the company only sought the opinions of people in a handful of states in the region, curiously overlooking those in most of Russia's other traditional partners such as Syria, China, Serbia, and Kazakhstan in order to arrive at what might have been their intended reverse-engineered "conclusion" all along, namely that, as the title of their report alleges, "Public Worldwide Unfavorable Toward Putin, Russia".

© AP Photo / Andrew Harnik
What's Behind Upcoming US Aircraft Carrier's Visit to Vietnam First Time Since 1975 War?
The absence of these aforementioned states clearly skews the overall results when considering that predictably anti-Russian states such as Poland, Australia, and the UK were included in the poll. Nevertheless, all technical details about the methodology and the "conclusions" of the polling data aside, the fact remains that Vietnam has shown that it truly loves Russia much more than any of the other countries surveyed. Even if Syria, China, Serbia, and Kazakhstan would have been included in the data set, Vietnam would probably have still ranked among the highest of all of them in every category, and this is due to a few key historical and strategic reasons that will be touched upon briefly in this analysis.

The first half of the article will report Pew's findings as they relate to Vietnam, while the second one will interpret the results in explaining why its people are so favorable towards Russia.

Six Ways To Say I Love You

The Pew report cited data from six separate polls, all of which proved the various multidimensional ways in which the Vietnamese love Russia:

They Have Loads Of Confidence In Putin:

Vietnam leads the pack of over 30 countries surveyed in expressing the highest amount of confidence in President Putin (79%), as well as having the lowest lack of confidence in him as well (9%).

…And Much More In Him Than In Trump:

© AFP 2020 / MLADEN ANTONOV
US, Russia Set Date for Plenary Commission Meeting on Cold War-Era POWs
Vietnam placed third on the list behind Greece and Lebanon in having the highest spread of confidence between Presidents Putin (79%) and Trump (58%), which is likely attributable to two reasons. The first is that Greece and Lebanon have special ties to Russia which transcend Vietnam's, namely the former's civilizational-religious affiliation with Moscow and the latter's "Resistance Arc" connection. The second factor, though, is that the Vietnamese also have the second-highest confidence in Trump out of the populations that were polled other than the Philippines (69%) and Nigeria (which tied Vietnam at 58%), and this is probably because of Hanoi's astute "balancing" strategy, which will be described in the last part of the article.

They Know That Russia Isn't A "Threat":

Only 11% of Vietnamese consider Russia a "major threat" to their country, the lowest of any of the populations that Pew surveyed, which infers that 88% know that they have nothing to fear from Moscow. The extreme minority who are "afraid" of Russia probably don't understand the country's diplomatic balancing act in Asia and mistakenly think that Moscow is siding with Beijing in preparation for a preemptive maritime war against them, which is ridiculous to even countenance.

They're Overwhelmingly Favorable Towards Russia In General:

According to the fourth poll that Pew cited, 83% of Vietnamese have a favorable view towards Russia, which is followed by 64% of Greeks, showing that in some ways, Vietnam's love of Russia trumps that of Greece's in spite of the country not having any shared civilizational-religious similarities with Moscow.

…And This Holds Constant For The Vast Majority Of All Age Groups:

Expanding on the above, the research shows that 89% of people aged 18-29, 82% of those 30-49, and 74% of those over 50 have a favorable view of Russia, which is both the most consistent and highest of the selected examples that Pew chose to expand upon.

They Know That Russia Is The Land Of The Free:

The percentage of Vietnamese who believe that the Russian government respects the personal freedoms of its people (85%) is the largest by far of any of the sampled populations; likewise, the percentage who believes that this isn't the case (4%) is the smallest of all the examples provided.

Analyzing the Roots Of Affection

There are assuredly some Vietnamese who are undying Russophiles and hold anything related to Russia in the dearest of regards, but most of the population probably base their love for Russia on following three pragmatic points:

What You See Is What You Get:

The Vietnamese and Russians have a long history of personal interactions with one another, whether through the academic and military exchanges that took place during the Soviet period and continue into the present day, or the positive experiences of immigrants moving to one another's countries. In addition, Russia's "tourist diplomacy" is probably another factor behind why the Vietnamese still retain very positive views of the country, since these individuals properly represent their homelands by being respectful to their local hosts and pumping millions of dollars into its economy.

The Russian-Vietnamese Strategic Partnership is marked by a robust arms trade which has resulted in most of the Southeast Asian state's weapons and military equipment being of Russian origin. In addition, the two sides also inked a Free Trade Agreement with the other through the Eurasian Economic Union, which is expected to provide for more diversified commercial relations between them in the coming future. It's this win-win military-economic synergy which adds crucial substance to their soft power affection for the other.

The Soviet Union and Vietnam were close Cold War allies which never experienced any mutual falling out throughout their history, unlike Hanoi's Vietnam War-era ally China. This is probably due to Beijing being geographically "too close for comfort" for Vietnam, whereas Russia's distance on the other side of Eurasia provided for no such chances that any similar regional competition or conflict would ever transpire.