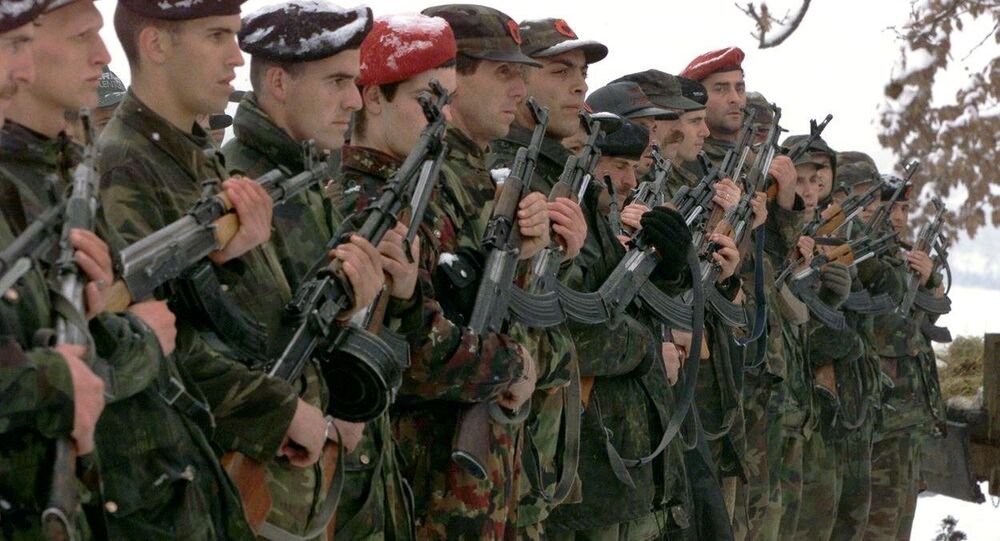 You are about to enter the ultimate minefield.

© AFP 2020 / ARMEND NIMANI
EU's Post-Brexit Pivot to the Balkans Piles Pressure on Serbia to Give Up Kosovo
Let’s start with 28 EU leaders discussing the Western Balkans at a recent summit and blaming – what else – "Russian aggression" in the EU’s backyard.

Cue to a Montenegro prosecutor raging that "Russian state bodies" staged a coup attempt during the October 2016 elections to stop the country from joining NATO.

And cue to President of the European Commission Jean-Claude Juncker warning that Donald Trump’s anti-EU rhetoric could lead to war in the Balkans. Juncker, condescending as ever, maintains that, "If we leave them to themselves — Bosnia and Herzegovina, Republika Srpska, Macedonia, Albania, all of these countries — we will have a war again."

© Wikipedia / antomoro
Serbia to Commemorate All Victims of 1999 NATO Bombings of Yugoslavia
The Balkans may be about to explode – all over again. Yet with a twist; unlike 1999, NATO won’t get away with bombing a defenseless Belgrade for 78 days. A new generation of Russian missiles would easily prevent it.

The 1999 tragedy in the Balkans was essentially stirred up by fake massacres in Kosovo set up by the BND – German intelligence — using local Albanians and BND agent provocateurs, who shot both sides to stir up a war and break up Yugoslavia.

All Eyes on Albania

© AP Photo / Darko Vojinovic
Albanians Seek to 'Demonstrate That Serbs Have No Place in Kosovo'
What’s evolving at the current geopolitical juncture is even murkier.

The usual suspects do what they usually do; blame Russia, and damn any evidence.

So let a knowledgeable insider, Dr. Olsi Jazexhi, director of the Free Media Institute in Tirana, Albania, be our guide.

In December 2016, the CIA’s John Brennan went to Albania and issued a fatwa for “war against Russia” – especially in Macedonia.

As Dr. Jazexhi explains, “after Brennan left Edi Rama, Prime Minister of Albania, a close friend of George Soros, gathered all Albanian political parties in Macedonia and ordered them to support  Zoran Zaev against Nikola Gruevski. Gruevski is seen as filo-Russian and anti-NATO, while Zaev is a lapdog of Soros. As a result, Gruevski was boycotted by Albanians and Zaev had their support to form a government. The promise of Zaev to Albanians is that Macedonia will adapt Albanian as an official language and create a third (half) Albanian state in the Balkans. Macedonians are resisting, but Tirana and Edi Rama are orchestrating Albanian political parties against Gruevski. The end game is to make Macedonia a NATO member.”

Meanwhile, in Kosovo – essentially a nasty narco-Mafioso scam posing as a state and housing Camp Bondsteel, the largest overseas US military base on the planet — Hashim Thaci, the president and former Kosovo Liberation Army (KLA) goon, is “building an army for Kosovo. The final aim is to integrate Kosovo into NATO even though Serbia rejects this for its former autonomous province.”

© Flickr / Artur Malinowski
Beachfront Albania: Tirana Hopes to Tempt Russian Travelers Who Have Turned Away From Turkey
Jazexhi also details how, “in Albania, we have two major terrorist organizations being protected by the Americans and the Europeans.”

The first is what Ankara describes as the Fetullah Gulen Terror organization (FETO), allegedly instrumentalized by German intelligence; “Turkey is protesting why Albania hosts the FETO group but the Americans host them against Erdogan.”

The second is Mojahedin-e Khalq (MKO), which fights against Tehran; “Albania is being turned into the center of MKO. John Bolton was recently in Tirana, with other international supporters of MKO, and they are attacking Iran and calling for regime change.”

© AP Photo / Darko Vojinovic
Albanians Seek to 'Demonstrate That Serbs Have No Place in Kosovo'
The MKO’s wacky Marjam Rajavi has also visited Tirana, developing  plans to “topple the Ayatollahs” in Iran.

The key issue, as Jazexhi emphasizes, is that “after turning the Balkans into a recruiting center for ISIS/Daesh during the Syria war, now the Americans are turning Albania into a jihad 2.0 state.”

So what is developing is “the same historical mistake as made by the Albanians of Kosovo, who have 100% linked their future with Camp Bondsteel and would will be instantly re-invaded by Serbia in case NATO or the US leave (which they will, sooner or later, inevitably).

Meanwhile, the European Union and the Americans, who want to de-radicalize the Wahhabi Muslims of Europe, keep mum about the Iranian jihadis.”

So the key piece of the puzzle is the configuration of Albania as the center of Jihad 2.0 — against the Slavs in Macedonia, against Tehran, and also against Ankara. No wonder the chief adviser of the Albanian government, until a few months ago, was a certain Tony Blair.

But then there is the “invisible” enemy that really matters.

© Sputnik / Alexey Vitvitsky
Having It Both Ways: Serbia Steers Toward EU Without Abandoning Russia, China
In late March, Serbian President Tomislav Nikolic went to Beijing in his last official visit before the April 2 elections. Chinese President Xi Jinping stressed that economic cooperation with Serbia – and the Balkans at large – is a priority for China.

No question. In 2014, Beijing created a fund that will invest 10 billion euros in Central and Eastern Europe. Last year, China Everbright bought Tirana’s airport in Albania. China Exim Bank is financing highway construction in both Macedonia and Montenegro.

In Serbia, China Road and Bridge Corporation built the 170 million euro Pupin bridge over the Danube in Belgrade – a.k.a. the “Sino-Serbian Friendship Bridge”, inaugurated in 2014 and 85% financed by a China Exim Bank loan.

© AFP 2020 / SAVO PRELEVIC
Favor for Favor: Montenegro Pays the Price for NATO Entry by Spoiling Ties With Russia, Serbia
And the cherry in the (infrastructure development) cake is the 350 km, $2.89 billion high-speed rail line between Athens and Budapest, via Macedonia and Belgrade.

The EU has set off alarm bells on the flagship $1.8 billion Budapest-Belgrade stretch, investigating whether the Hungarian section violated strict EU laws according to which public tenders are a must for large transportation projects.

Inbuilt is the proverbial Western haughtiness, ruling that the Chinese could not possibly be capable of building high-speed rail infrastructure as well if not better – and for a lower cost – than in Europe.

© Sputnik / Oleg Ivanov
Serbia Boosts Security Cooperation With Russia Amid Renewed Kosovo Provocations
Budapest-Belgrade happens to be the crucial stretch of the Land Sea Express Route that Beijing pledged to build, way back in 2014, with Hungary, Serbia and Macedonia. That’s the crux of the Southeastern Europe node of the New Silk Roads, now Belt and Road Initiative (BRI); a trade corridor between the container port of Pireus, in the Mediterranean – co-owned by China Ocean Shipping Company since 2010 – all the way to Central Europe.

NATO’s official spin is that it must be planted in the Balkans to fight the “threat of terrorism.” According to NATO Secretary General Jens Stoltenberg, “I recently visited Bosnia Herzegovina and Kosovo, and I’m encouraged to see how focused they are on countering the threat of foreign fighters."

Well, the “foreign fighters” happen to be right at home, not only in Kosovo but soon in Albania, the capital of Jihad 2.0. NATO after all excels in creating emerging “threats” that are essential to justify its existence.

Jihad 2.0 may be directed against Slavs in Macedonia, against Iran and against Turkey. Not to mention against the Russian underbelly. The invisible angle is that they can always be deployed to jeopardize China’s drive to integrate southeast Europe as a key node of the New Silk Roads.

'Reunification of Europe, Not Expansion': The Balkans to Join EU After Brexit

John McCain Calls for 'American and European Leadership' in Balkans