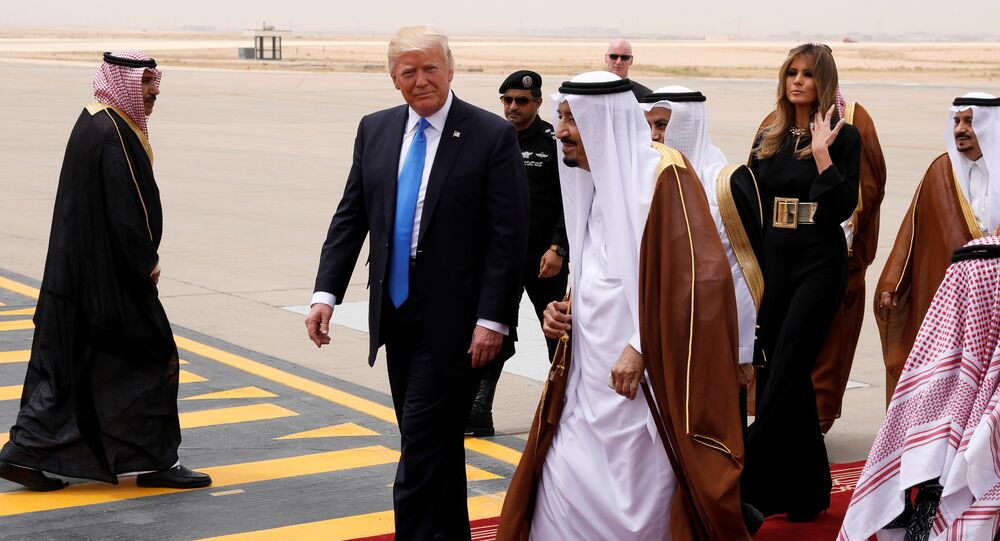 Embattled at home in a do-or-die war (or "witch hunt") against powerful factions of the deep state, President Trump, in the first stop of his first foreign trip, lands with pomp and circumstance in the ultimate totalitarian theocracy.

© AFP 2021 / JIM LO SCALZO / EPA POOL
Trump Visits Bethlehem Bearing Gifts to Child Killers
Trump will be lavishly entertained by a parasite monarchy that for decades exports the ideological matrix of all forms of Salafi-jihadi terrorism; a regime that denies the rights of its own population and teaches them to hate foreigners, non-Muslims, women, art and a culture-heavy past (as in bombing priceless historical sites in Yemen).

The same regime still denies, as a state, any implication in financing the most extreme terror outfits – without, for that matter, preventing influent pious nationals of doing so on an individual basis; interferes in the religious culture of Sunni Muslim nations all over the world and sterilizes any possible debate about Islam; foments an ethnic-confessional war between Sunnis and Shi'ites that envelops the whole Middle East in fire and blood with the only objective of enfeebling geopolitical rival Iran, all the while meekly invoking American protection.

Talk about a nasty theocracy with no redeeming qualities. And that's only the short version.

Trump's lavish Riyadh get-together is being billed as part of his drive to support the renaissance of US manufacturing. That translates in fact as yet another bonanza for the industrial-military-security-surveillance complex, in the form of a series of mega-deals that include the totalitarian theocracy buying over $100 billion – and possibly more than $300 billion — in US weaponry.

On the side, Trump will propose his Arab NATO scheme – which is essentially the formalization of an already existing NATO-GCC symbiosis. This Arab NATO will – in theory — fight some strands of Islamic fundamentalism (Daesh, but not, for instance, Jabhat al-Nusra), but most of all what the GCC bills as the "existential threat" of Iran as well as, subtext applies, Shi'ism.

© AP Photo / Saudi Press Agency
Lavrov Sheds Light on Russia's Stance on Plan to Create 'Persian Gulf NATO'
This will all be enshrined at a banquet shared by the whole GCC petrodollar gang and over 50 Muslim-majority nation leaders, all guests of the Alzheimer-suffering House of Saud nominal head, King Salman. Both Syria and Iran have not been invited. Trump is bound to deliver a speech to the Muslim world – a portentous temerity in itself.

The massive, brand new US weaponizing will be deployed – as the NATO-GCC spin goes – for "defense" against Iran, and most of all "defense" against Syria and Yemen, which, as the record shows, are guilty of not being led by Wahhabi fanatics.

Every grain of sand in the Arabian desert knows the main jihadi brigades in Syria, the so-called Army of Conquest, led by al-Nusra, a.k.a. al-Qaeda, are funded by House of Saud-linked Wahhabi fanatics. Nusra will immensely benefit from the new weapon extravaganza.

© AP Photo / Pablo Martinez Monsivais
First Foreign Trip: 'Trump Going to Pay Tribute to Centers of World Religions'
On Iran, the House of Saud can even count on being fully supported by Trump's generals, "Mad Dog" Mattis at the Pentagon and National Security Adviser HR McMaster, who've both been to Iraq and see Tehran as Evil incarnated.

When we add the cozy accommodation between Israel and Daesh, the whole panorama explodes any Dadaist/surrealist thermometer. Wounded Nusra jihadis have been routinely treated in Israeli military hospitals. When Daesh accidentally shelled Israelis in the occupied Golan Heights, Moshe Yaalon, former Israeli Minister of Defense, breathlessly stressed, the jihadis "immediately apologized to Israel."

Of course they did. Daesh works to advance the key Israeli strategic objective across "Syraq"; to keep secular Arab states weak, fragmented, bleeding from perpetual wars. That also happens to be the exact same strategic objective of the US deep state, Trump or no Trump. The brand new massive weapons deal perfectly fits the bill.

So there could not be a more graphic illustration of how the battle lines are now drawn; on one side we have Washington, the House of Saud, GCC and Israel (the GCC is dying to strike a deal with Tel Aviv, selling the Palestinians down the drain for good); on the other side we have Iran, Syria – and Russia.

It's raining cash for weapons!

© AP Photo / Evan Vucci
America First: Trump Promises to Protect US Interests During First Overseas Trip
The mere visit itself – with the whole House of Saud and its sprawling media empire gleefully prostrated in front of His Masters' Voice – shows how little has changed since the good ol' Roosevelt/King Saud USS Quincy days. Once again, the House of Saud is buying US protection – and the War Party Mafia certainly knows an "offer you can't refuse" when it sees one.

The alliance between Abu Trump al-Amriki and deputy crown prince MBS is one for the ages. A selfish, aggressive warmonger posing as an economic expert, MBS is fast collecting powerful enemies in Riyadh.

Saudi Arabia is a lowly rentier state, the Bedouin version, infested by paternalism. The Saudi population was estimated at 26 million last year; active population at 18 million. There are at least 9.4 million immigrant workers, and at least 2 million illegals. In practice, we have no more than 8 million Saudis in the workforce, with only 41% actually working full-time.

MBS has been all over the West's capitals promoting the "Vision 2030" program which would – in theory – reduce Saudi dependency on oil. That includes, among other things, lower salaries for state functionaries; fewer energy subsidies; selling plots of land around Mecca; and most of all selling 5% of oil giant Aramco to foreign investors through a massive IPO to take place next year, possibly generating over $100 billion to be invested in nuclear and solar energy projects.

© AP Photo / Lockheed Martin
Saudi Arabia to Buy Four Lockheed Martin Littoral Combat Ships for $6Bln
That's all in the conditional. What's certain is that while preaching austerity, MBS took only a few hours in summer last year to buy the yacht of Russian billionaire Yuri Sheffler for 550 million euros after he saw it during his holiday in the Cote d'Azur.

Then there's Yemen — for all practical purposes the House of Saud's and especially MBS's Vietnam. As a direct consequence of MBS's war, the UN estimates 17 million Yemenis are "food insecure," a.k.a. starving, including 3.3 million pregnant and breast-feeding mothers and children. Trump fully supports the war on Yemen.

On Daesh, first-class Algerian writer Kamel Daoud has nailed it: "Daesh has a mother, the invasion of Iraq. But it also has a father, the ideological industry of Saudi Arabia." Since 2009 WikiLeaks has made it clear that private donors in Saudi Arabia are the main source of financing for Salafi-jihadis.

© AP Photo / Mosa'ab Elshamy
Saudi Arabia Hopes to Go Self-Sufficient With Weapons by 2030
Don't expect Trump advisers to clue him in. Whatever it's called, Salafism or Wahhabism, the official doctrine remains an ultra-puritan Islamism calling for an expansionist jihad. The House of Saud and a jihadi Caliphate are both sides of the same totalitarian theocracy coin. Trump welcomed by the House of Saud to fight Daesh qualifies as the ultimate Monty Python sketch.

Still, the House of Saud may always count on gullible/greedy Westerners – the same ol' Roosevelt/King Saud effect. All it needs is a diversionist tactic. Enter, for instance, MBS's interview broadcast a few weeks ago on al-Arabiya TV and Saudi TV, where he proclaims, "We will not wait until the battle is in Saudi Arabia, but we will work so the battle is there in Iran," claiming, risibly, that Iranian Shi'ites want to seize Mecca. Actually, for years there have been secret CIA scenarios gaming exactly that – perpetrated by US commandos.

When MBS promised, like a Drama Queen, ahead of Trump's visit, to carry "the war" against Iran into Iranian territory, he may have bitten more than he can chew. It might just be possible that Trump won't frontally antagonize Tehran from now on, as he needs both Iran and Russia for some sort of peace deal in Syria (as Trump, Tillerson and Lavrov discussed at the White House).

So, for the moment, why not bask in the glow of Saudi adulation? It's raining cash for weapons, and no one better than Abu Trump al-Amriki knows there's no business like (proxy) war business.