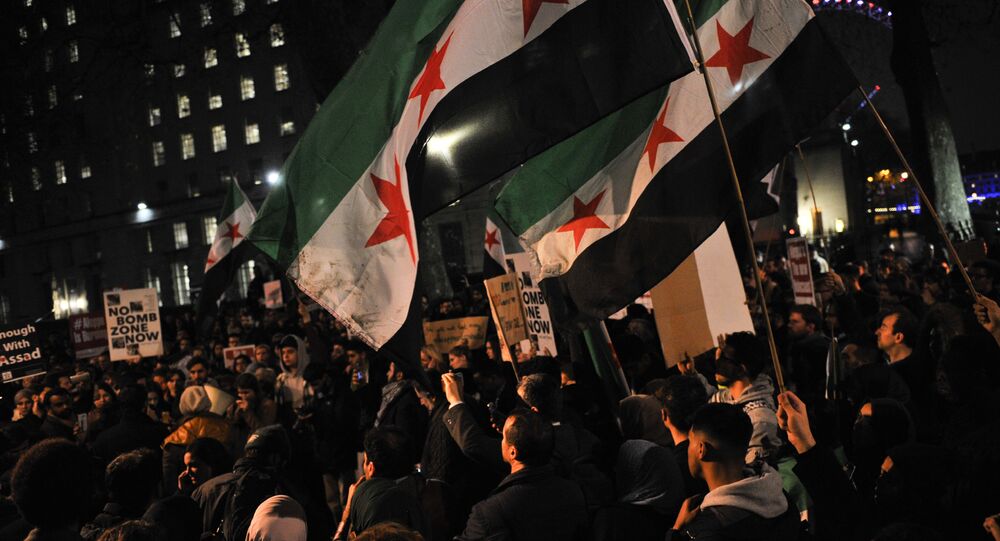 On Saturday December 17, "March for Aleppo" protests were held in Paris, Berlin and London. "There is a Holocaust going on and we urgently need the international community to take action to save lives," claimed the Syria Solidarity Campaign on their Facebook page.

For the organizers of the Aleppo protests — and for most of the demonstrators — there was no doubting who the bad guys are: the Syrian government and Russia.

The message of the protests was clear: the Syrian government and its Russian ally (and Iran which was mentioned in several posters too), were committing genocide in Aleppo, and their actions in trying to recapture the eastern part of the city were in breach of international law.

To stop this "Holocaust," the West must stop sitting on the sidelines by "taking action" to enforce "no fly zones" to save the Syrian people. Everything about this narrative is false. To call what has been happening in Aleppo a "genocide" and a "Holocaust" is an gross insult to the victims of genuine genocides like the Native Americans, the Jews and other peoples killed in Nazi concentration/death camps during World War Two or the Congolese slaughtered during King Leopold II of Belgium's bloody rule of terror.

Neither is it fair to cast Putin and Assad as devils for the military action taken to recapture east Aleppo from western-backed "rebels" affiliated to al-Qaeda/al-Nusra.

Aleppo is Syria's most populous city: just imagine the reaction of the US or British government if foreign-armed and financed al-Qaeda/al-Nusra jihadists took control of east London or eastern parts of New York. Would they simply accept the loss of territory with a shrug of the shoulder and do nothing to reclaim it?

Of course they wouldn't.

© AFP 2020 / KARAM AL-MASRI
Buses are seen during an evacuation operation of rebel fighters and their families from rebel-held neighbourhoods in the embattled city of Aleppo on December 15, 2016

To say that the Syrian government had the right to use force to recapture part of its territory does not mean of course that one condones or supports all actions taken in the military operation. If war crimes were committed in Aleppo, then they need to be properly investigated by genuinely independent bodies. The trouble is though that so many claims have been unsubstantiated and made by those pushing a 'regime-change' agenda.

We've had lots of lurid claims of massacres and people being burned alive during the liberation of Aleppo, but as yet no credible evidence has been produced to back up the allegations. And in case you think that's just 'Russian propaganda', take heed of the words of Peter Hitchens of the Mail on Sunday, whose most recent column was entitled "Amid the bombs of Aleppo, all you can hear are the lies."

Hitchens noted that the sources for the reports of "massacres" come from so-called "activists."

"As far as I know, there was not one single staff reporter for any Western news organization in eastern Aleppo last week. Not one. This is for the very good reason that they would have been kidnapped and probably murdered," Hitchens wrote.

The claim that the Syrian government — and its Russian ally — have been acting in breach of international law is also untrue.

Russia was invited by the lawful, UN-recognized Syrian government to help it defeat Western-backed terrorists who were advancing on Damascus.

If we're looking for countries who have been in in breach of international law in Syria, try the US, UK, France, Israel and Turkey who have no legal right to bomb the country or engage in any military operations there.

The solutions put forward by the "March for Aleppo" protesters would actually lead to more bloodshed, and not less.

We've seen before, in Iraq and Libya, how the imposition of NFZs (no fly zones) are the precursor to full-scale Western military assault on the country in question. And attempting to impose a NFZ in Syria- or more accurately a "We, the west can fly, but you, the Syrian government and your allies can't" zone, would be highly likely to lead to World War Three with Russia.

Is that what the "Save Aleppo" protesters really want? A nuclear Armageddon? How very humanitarian.

Of course, in free societies, people have every right to protest and organize demonstrations. I have been to Syria and know Syrians who are both pro and anti- government. It's wrong and inaccurate to paint all opponents of President Assad as fanatical extremists. However, there's no doubt that the vast majority of those seeking the violent overthrow of the Syrian government are such people.

Syria's new democratic constitution, endorsed in a 2012 referendum, provides a means for those opposed to the Ba'ath party to make their voices heard. But instead of encouraging people to get involved in democratic process and take part in elections, the West and its regional allies, have only been interested in keeping the bloodshed in Syria going.

How it must have pleased neocons and liberal 'regime-changers' in Washington, London and Paris — the people who bear prime responsibility for Syria's descent into hell —to see angry protesters marching through western capitals with "Putin — Child Killer" placards!

© Photo : Pixabay
Anti-Russian Hysteria in Washington Is a Byproduct of Imperial Decline

We saw only on Monday (December 19) where this new wave of Western elite-sponsored and CIA-fueled Russophobia leads to, with the brutal murder of the Russian Ambassador to Turkey.

With Russia demonized on a 24/7 basis for causing a "Holocaust" in Aleppo, is it any surprise that someone living in a NATO country would react by wanting to kill a Russian diplomat?

Reports said the murderer of Andrei Karlov in Ankara shouted, "Don't forget Aleppo!" after opening fire. Wittingly or unwittingly, Turkish assassin Mevlut Mert Altintas and the protesters who took part in the anti-Russian demonstrations in London, Berlin and Paris at the weekend are serving the interests of those who have killed over 1 million Muslims in the last two decades and whose concern for the women and children of Aleppo is as fake as the tears of a crocodile.

The big story of Aleppo is not about a genocide that did not take place, but how, against all the odds, the Syrian government — with Russian and Iranian assistance — has effectively defeated the serial regime changers who have caused so much misery around the world since the 1990s.

Aleppo was the Stalingrad of 2016, the place where an aggressive, morally-depraved, expansionary war-mongering empire was finally stopped in its tracks. Did Russia or the Syrian army attack Yugoslavia, invade Iraq, and bomb Libya back to the Stone Age?

It's time everyone saw the bigger picture.