The US Central Intelligence Agency and its media outlets started the conspiracy – so let’s turn the tables on them. Could the CIA be setting Hillary Clinton up in a false flag hit for the purpose of blaming it on Russia?

The Post quoted a renowned US sports-injury doctor as saying that Putin or Republican candidate Donald Trump, working in league, may have induced Clinton’s recent bout of ill health.

And the doctor recommended that the Clinton campaign team get a toxicological analysis of her blood carried out, on the suspicion that she may have been poisoned.

For several months now, the 68-year-old former senator’s health has been the subject of intense public speculation, not least fanned by her Republican rival Donald Trump.

Apparent facial seizures while addressing public platforms and coughing spasms in front of media reporters culminated last Sunday at a New York event commemorating the 9/11 terror attacks, when Clinton was videoed collapsing on a sidewalk as aides bundled her limp body into the back of a van. 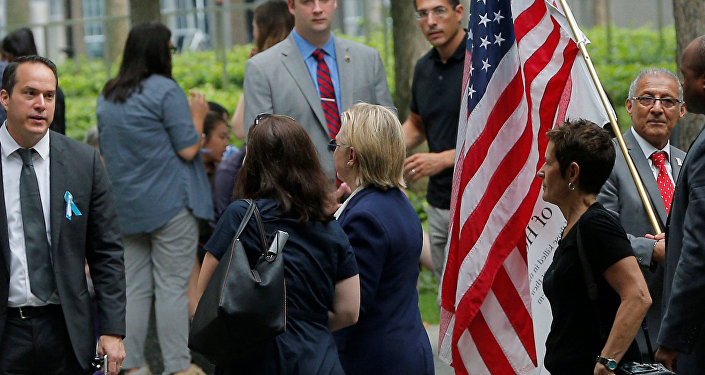 © REUTERS / Brian Snyder
Clinton Cancels California Trip due to Health Issues
Clinton’s campaign team later said she was suffering from pneumonia, which forced her to take three days off from political rallying this week. She has since resumed the stumps, having apparently made a recovery.

However, after weeks of dismissing claims about Clinton’s ill-health as wild conjecture, the Washington Post then gives vent to the even wilder notion that the Democrat candidate has been poisoned by Russian agents.

The Post, on one hand, half-acknowledges that the “theory” is far-fetched. Yet, the newspaper – one of America’s top publications – also sneakily adds credence by going on in the same article to reiterate baseless British claims that Russia’s Putin ordered the poisoning of Kremlin critic Alexander Livitnenko while he was living in exile in London in 2006.

Livitnenko’s death from Polonium poisoning was more likely caused by shady rivals in the criminal underworld. There is no evidence that Russian state agents were involved in his demise. But the claims have provided Western media with plenty of material to continue demonizing Moscow and Vladimir Putin in particular, as the Washington Post article demonstrates.

The latest claim that Clinton has been poisoned by Kremlin agents plays into a litany of false narratives portraying Russia as an evil foreign enemy. From the alleged “annexation” of Crimea, to alleged destabilizing of Ukraine, to the alleged shooting down of a Malaysian civilian airliner in 2014, to alleged “state-sponsored doping” of Olympic athletes.

With this mass media campaign of vilification against Russia and inculcation of pejorative public perception, it is in many ways a logical next step that American spooks in the CIA and closely aligned news outlets like the Washington Post would attempt to implicate Russia in incapacitating Clinton as presidential candidate.

After all, US media in concert with their favored Clinton presidential campaign have been pushing claims that Russian state-sponsored cyber hackers are interfering in the US elections by leaking damaging private information against Clinton. The identity of these hackers may well be American citizens opposed to Clinton. 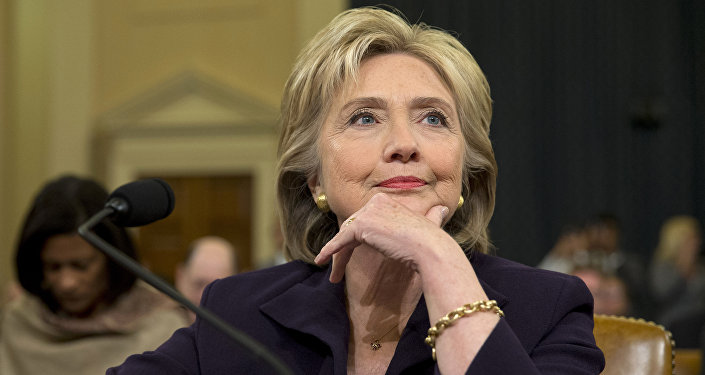 © AP Photo / Carolyn Kaster
'Queen of Chaos': Hillary Clinton Partially 'Responsible for Global Disorder'
Alleging that Hillary Clinton has been poisoned by Russia fits neatly in with a full-on US and Western media offensive portraying Russia under Putin as a global threat. The deep forces behind this campaign – the CIA and Pentagon – are the main beneficiaries from conflict with Russia. Clinton is favored by these forces because, of the two presidential candidates, she is the one who is belligerent towards Moscow. In short, she is the US Deep State’s candidate.

And the Deep State’s operatives in the mass media consequently row in behind her campaign, working to downplay her trail of corruption, while at the same time maximizing negative coverage of Trump.

But what if the political-media orchestration fails to get Clinton elected in November? Recent polls show that Clinton’s lead over Trump is waning to the point where it is neck and neck.

Given the high stakes to get their candidate into the White House, the Deep State is faced with a quandary of a tight race that could go either way.

So, there is a need to up the dirty tricks. Touting old Cold War tropes about Russian interference in US politics and Trump being a “Kremlin stooge”, the latest desperate bid to escalate fear is the theory that “Putin has poisoned the Democrat candidate”.

But hold it a moment. What if Clinton’s health impact needed a little bit of “evidentiary proof” that Russian agents were somehow involved?

© AP Photo / Patrick Semansk
US Intelligence Agencies Actively Ramping Up Operations Against Russia
This is analogous to how US intelligence agents could set up alleged Russian cyber hackers by leaving seeming telltale digital forensics implicating the Russians.

In the scenario of Clinton’s health, the CIA could themselves poison her, or cause damage in some other way to her condition, with medication that at a convenient later stage could be tested in such a way as to implicate Russian involvement, just like the Polonium poisoning of Livitnenko.

Think about it. The CIA have the capability, the motive and past record for such devious foul play. It was the CIA that masterminded the assassination of President John F Kennedy out of geopolitical calculations against the Soviet Union. If the organization is capable of taking out a president, then why not take out a presidential candidate?

Blaming Russia on such a dastardly deed would ensure the Deep State’s number-two candidate, Clinton’s running mate and Pentagon-connected Tim Kaine, would most likely get elected on a wave of patriotic fervor.

The new gung-ho US administration would then pave the way for the CIA-Pentagon, military-industrial complex’s desired ramped-up confrontational policy towards Russia. Tens of billions of dollars in military contracts would flow.

To skeptics who say this is preposterous, it should be noted that the US shadow government has shown no compunction whatsoever in the past to sacrifice American lives in the furtherance of its own elitist agenda. The assassination of JFK is a case in point. That led to the lucrative Vietnam War in which 50,000 US troops were killed, as well as up to three million Vietnamese.

© AP Photo / Tony Dejak
Clinton Claims No American Lives Lost In Libya, But the Internet Remembers Everything
Another case in point are the 9/11 terror events which saw three New York skyscrapers implode 15 years ago with the loss of some 3,000 lives. That sabotage points to a false flag incident carried out by US secret forces which then provided the pretext for foreign wars of aggression and empire building, notwithstanding thousands of more American troops killed, as well as over a million Iraqis, Afghanis and others.

It is perhaps nefariously fitting that the latest slander against Russia as having something sinister to do with Clinton’s health problems should emerge out of her collapse at a 9/11 commemorative event.

But the real twist in this latest psychological operation against Russia is that Clinton’s health impact has nothing to do with alleged poisoning by Russian agents. If anyone is involved it would most likely be the people who form the shadow government of the US.

Has Footage of Hillary Collapsing Ruined Her Bid for the White House?

Confirmed: Google is Trying to Win Elections for Hillary