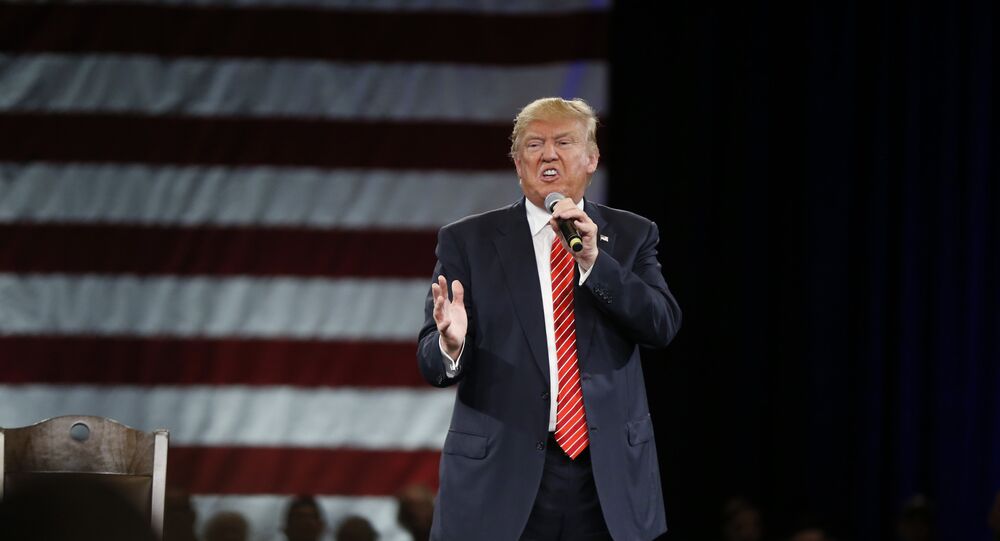 In an amazing feat of American reality-inversion, this week saw revelations about how the US electoral system is rigged by the rich and powerful. Yet the story is flipped to outlandish allegations that Russia’s President Vladimir Putin is a villain out to destroy Western democracy.

In an article in Slate magazine, we are told: “Putin plan for destroying the West – and it looks a lot like Donald Trump”.

The billionaire property magnate is now being labelled as “Putin’s puppet” and the “Kremlin’s candidate”.

This is a re-run of American establishment paranoia that dominated the Cold War decades, when any political challenger for high office in the US could be blackballed by mere assertion that he was a fellow-traveller of the Soviet Union. Today, “communism” is replaced with allegations of being friends with Moscow “tyranny”.

The emails are a devastating indictment of how the Democrat party leadership has from the outset sought to make sure Hillary Clinton becomes the presidential nominee by crushing her populist rival Bernie Sanders. Clinton is backed by big business, Wall Street and the Pentagon.

The Wikileaks email revelations on the eve of the Democrat convention this week in Philadelphia is proof that what passes for American democracy is a rigged system, ordained by the rich and powerful to elect their candidate to do their bidding when in office.

Sanders acknowledged how the political system was unfairly stacked against him and his supporters. Nevertheless, the Vermont senator has gone on to endorse Clinton, to the disgust of many of his supporters.

Rather than focusing on what is a teachable moment of corporate control of politics, the US media performed mental gymnastics by shifting this real story on to wild speculation that the Democrat email leaks were masterminded by Russian intelligence. The allegation was flatly denied by Wikileaks.

© Sputnik / Sergey Guneev
Putin Expects Sense of Responsibility to Compel Next US President to Cooperate With Russia
So now, instead of the public examining how powerful American interest prevail on their democratic choice, the narrative becomes one of accusing Vladimir Putin of subverting the US presidential elections.

The slander against Russia is only afforded a semblance of credibility because it is piled on a heap of previous slander, in which Moscow is accused of annexing and invading Ukrainian territory, posing a threat to Eastern Europe, assassinating political opponents, shooting down civilian airliners and sponsoring illicit drugs in Olympic sports.

One again, rumor, insinuation and vilification triumph over facts in the Western media’s so-called news services.

The story of Russian state-sponsored hackers breaking into the Democrat party’s email system first surfaced more than a month ago. As pointed out previously, the source of claims that it was Russian cyber-espionage was a private US security firm, CrowdStrike, which is closely linked to the Washington DC-based think tank Atlantic Council. The Atlantic Council is, in turn, tightly aligned with the US-led NATO military alliance.

The claims made against Russian state hackers are unverifiable. They are simply assertions from a partisan source, which are then amplified into seeming fact by the dutiful Western media.

Incredibly, this anti-Russian smear is then parlayed into a smear against Clinton’s Republican rival, Donald Trump.

© Sputnik / Sergey Guneev
They’re With Her: US Media Uses Putin, Russia to Label Trump a Traitor
Using stilted reasoning and scant regard for facts, the US media are charging that the Kremlin’s “hack” is “an effort to elect Donald Trump”.

The brash business mogul is now being portrayed as a Russian “fifth columnist” orchestrated by Vladimir Putin to undermine American world power.

This is a refrain of much-vaunted allegations that Putin is trying to wreck the European Union by financing anti-EU political parties; that Putin engineered Britain’s Brexit vote to quit the EU last month; or that the Russian leader is working a dastardly policy of sowing division among NATO members.

Trump has derided the “Putin puppet” allegations as ludicrous. It is true that Trump has previously spoken favorably about Putin, and that he has promised to improve relations between the US and Russia if elected in November.

As for Moscow, the Russian government has been careful not to make any public comments on the US elections that could be construed as favoring one candidate over another. Moscow has scrupulously kept out of US election affairs. Putin did refer once to Trump as being a “bright” and “talented” person. So what?

Underneath the mountain of hype and disinformation, one suspects that Trump’s comments last week dismissing NATO are the real bone of contention. Trump told the New York Times that he wouldn’t order US forces automatically to defend Eastern European NATO members if they were attacked.

In a refreshing use of independent reasoning, Trump in fell swoop rejected the whole Washington-led narrative of NATO defending Europe from Russian aggression. This narrative has been recklessly contrived and pushed by Washington over the last two years, which has heightened the danger of an all-out nuclear war with Russia.

Donald Trump may turn out a huge disappointment if elected to the White House. But at this stage, one has to acknowledge that his views, at least in regard to Russia, are significantly more welcome than Hillary Clinton’s, who is a Pentagon hawk in liberal clothing.

Trump’s refusal to sing from the same Pentagon hymn sheet of panning Russia as a global threat and calling for increased NATO militarism on Russia’s border is sheer anathema to the Washington establishment.

That is why the US powers-that-be are moving to discredit Trump as “a Russian puppet”.

And recall, the source of the Russian email hacker claims is a security firm linked with the Atlantic Council/NATO nexus.

Trump’s indifferent views on NATO and alleged Russian aggression in Europe are in total discord with the geopolitical interests of Washington and its drive for hegemony.

Since the Republican candidate gave his tepid views on NATO last week, there has been a parade of Western security pundits lambasting him as a patsy for Putin.

© Photo : Pixabay
Subsidy Desolation: US Farm Relief Program Goes Bust, Trump to Capitalize
It is a disturbing sign of how brainwashed Western public discourse is that when someone questions Washington’s reckless war beat towards Moscow, then that person is summarily dismissed as a Kremlin tool.

This is the practice of a totalitarian system, ironically under the illusion of a free-thinking, independent media.

The real story here is how American democracy is bought and paid for by powerful elite interests within the country. The email hacking issue on how Clinton is being selected as the next president by powerful corporations and the military industrial complex should be focus.

But no. The public’s attention is diverted by fantasies over villainous Vlad and his comrade Trump.

American politics has long been scoffed at by international observers as a joke version of democracy. Now we know it is a joke, and it’s not funny.