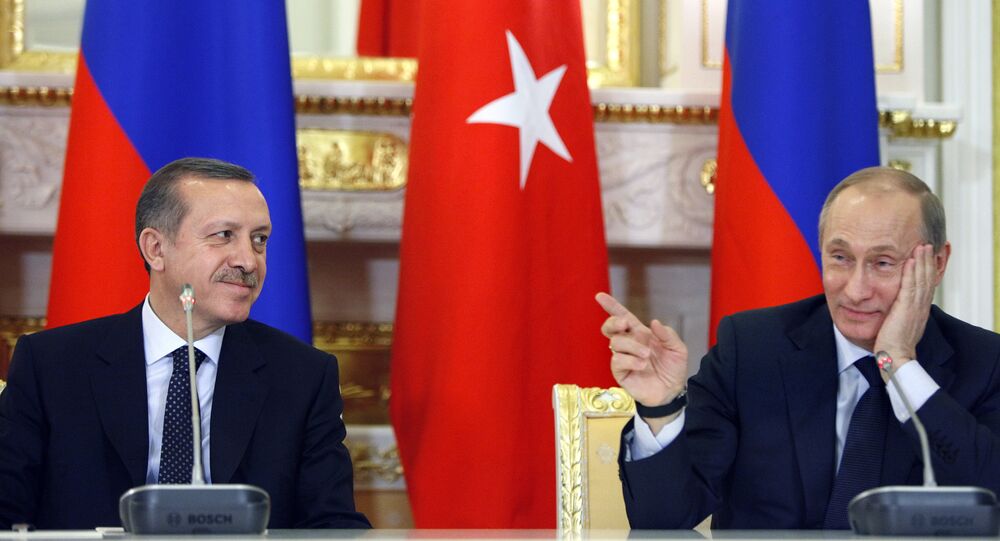 The recently released minutes from a November meeting between Erdogan and the EU prove that the Turkish strongman is manipulating the immigrant flow into Europe for strategic ends.

© REUTERS / Kayhan Ozer/
Erdogan Threatened to Flood Europe With Refugees Unless EU Deal Agreed
The Greek financial website euro2day.gr published the shocking record of what transpired at a November meeting between Erdogan, Tusk, and Juncker in Antalya.

In attempting to squeeze more money out of Brussels for his cooperation in halting the refugee flow, the Turkish leader thuggishly threatened that "We can open the doors to Greece and Bulgaria anytime and we can put the refugees on buses", snarling to the EU leaders and rhetorically taunting them by asking "how will you deal with refugees if you don't get a deal? Kill the refugees?"  €3 billion later, Erdogan shut up but he didn't shut his borders, and the human wave continues to crash into Europe.

Now that the cat's out of the bag and there's a smoking gun to prove what most Europeans had already figured out by now — that the immigrant crisis is a strategically engineered weapon against them — the US has gone into full spin mode by doing what it does best, blaming Russia.

A day before the minutes were leaked, Carnegie Europe published a mudslinging piece which alleges in its title that "Putin Uses The Refugee Crisis To Weaken Merkel", and a day after the Erdogan bombshell was made public, George Soros followed up with one of his famous speculative attacks (albeit this time non-financial) in which he ludicrously proclaimed that "Putin's current aim is to foster the EU's disintegration, and the best way to do so is to flood the EU with Syrian refugees."

Ironically, but as is the established pattern, every time that the US is caught doing something unsavory, they always reflexively resort to blaming Russia for their own sins, and the immigrant crisis is no different. What's new this time around, however, are the strange "anti-imperialist" bedfellows that they've aligned with in doing so.

The first thing to understand about the immigrant crisis is that the on-the-ground conditions for it were created by the US' aggressive unipolar wars on the Mideast and North Africa, and that the resultant humanitarian catastrophe has been strategically weaponized by Washington and its allies for various geopolitical and economic ends.

Kelly M. Greenhill, an Associate Professor at Tufts University and Research Fellow at Harvard Kennedy School of Government's Belfer Center for Science and International Affairs, published a groundbreaking 2010 book about "Weapons of Mass Migration: Forced Displacement, Coercion, and Foreign Policy" in which she proved that there are at least 56 instances in which states have purposefully generated, provoked, and exploited massive waves of human migrations as an instrument to further their respective policies. Excerpts from her book were culled to form a summarized article that's available for free at the Naval Postgraduate School's website.

In terms of the present application of "Weapons Of Mass Migration", the US and Turkey have a few overlapping goals in mind. Ghassan Kadi brilliantly explained that Erdogan wants to use the immigrants as leverage in order to extract financial and institutional concessions from the EU, while concomitantly flooding the West with Islamist-sympathizing individuals that can act as a fifth column of support for his expansionist policy of Neo-Ottomanism.

© Flickr / OetziTheIceman
Europeans Were Just Another Wave of Migrants, Scientists Say
The latter goal segues in nicely with what the US wants to do, which is to kaleidoscopically fracture hitherto largely homogenous European societies via provoked and prolonged Hobbesian conflict between the locals, refugees, and host governments. It's aware that the civilizational dissimilarity between the native Europeans and the migrating Muslim masses will inevitably lead to multifaceted tension, and it aims to perpetually exploit the resultant identity cleavages in order to conveniently craft various Color Revolution scenarios in keeping certain governments in check and away from pragmatic cooperation with Russia and China (e.g. Nord Stream II, Turkish/Balkan Stream, and the Balkan Silk Road).

It's useful at this moment to point out that while there definitely are some legitimate refugees reaching Europe's shores, many of the newcomers are economic migrants that aren't even from Syria, and that a highly disproportionate number of the people who have come to the continent are draft-age young males. This is why the author collectively and more accurately refers to these people as immigrants and not "refugees". Russian Defense spokesman Igor Konashenkov, American Director of National Intelligence James Clapper, and French Minister of Defense Jean-Yves Le Drian have all recently warned that Daesh terrorists are actively infiltrating borders under the guise of being "refugees", so there are absolutely some legitimate concerns about the types of people getting into Europe undetected.

Another thing is that "Islamist" isn't a synonym for Muslim (as it's commonly mistaken to be), but rather a label in referring to those that seek to impose Islam on others, such as Muslim Brotherhood and Wahhabi sympathizers. These individuals don't have to be instructed on how to stir up problems in their host countries because their Islamist ideology naturally inspires them to clash with the locals, which thus organically satisfies the US' 21st-century "Operation Gladio" plans. Regrettably, the sexual terrorist attacks in Cologne and other cities leave no doubt that many of these undesirable immigrants have already gotten into the EU, confirming that the US and Turkey's destabilizing geopolitical plans are already in full swing.

Most Europeans figured out on their own that something was amiss about the whole immigrant crisis, questioning why so many of the new arrivals, if they were genuine refugees, would behave with such arrogant, ungrateful, and callous disregard for the host population that literally (as they were led to believe) saved their lives. The smoking gun of Erdogan's transcribed threat, proving the degree of control that he has over the floodgates and his willingness to leverage this in as self-interested of a manner as possible, showed many Europeans that they weren't wrong for questioning the mainstream media's  narrative on this whole matter.

© Sputnik / Stringer
Behind Closed Doors: Nuland Briefs US Senators on Russia Talks
Similar smoking guns have dispelled the Western myth about other high-profile crises as well. The Nuland-Pyatt recording proved that the US was scheming for regime change in Ukraine, and a 2012 Defense Intelligence Agency memo explicitly states that the Syrian "opposition" was full of terrorists from the beginning and that a "declared or undeclared Salafist principality in eastern Syria", which later turned out to be Daesh, was "exactly what the supporting powers to the opposition want". The latest revelation validates many people's prior fears that the immigrant crisis had been strategically engineered, and it casts a damning light on the US' role and intended agenda behind it.

Tellingly, the faked hysteria that Putin is "flooding the EU with Syrian refugees" to "weaken Merkel" seems to imply that the German Chancellor's days are numbered, but the US wants to cover its tracks and clumsily pretend that it's Moscow which actually has something to gain by deposing its strategic Nord Stream II partner and not Washington like is actually the case.

Up until the point where the US had to begrudgingly acknowledge that strategically engineered "Weapons of Mass Migration" were being used against the EU and predictably blame it all on Russia, its allied "NGOs" and information outlets had categorically denied that such a planned phenomenon was taking place, slurring anyone who dared to even infer this possibility as being "racist", "fascist", and "white supremacist". Astonishingly, this mainstream media-imposed "political correctness" and ideological intimidation was aggressively repeated by social and alternative media "activists" who fashioned themselves as (militant) far-left "anti-imperialists" — typically the sort of individuals who speak out against the US' "thought police" or at least respect others' right to do so.

These "anti-imperialists" claim to support Russia's role in the world, yet state that border controls and assimilative & integrational immigration policies are some kind of "new fascism". Apparently they never read President Putin's 2012 manifesto on the topic, otherwise they would know that the Russian leader has a very firm and publicly declared stance against open borders and the Western conception of "multiculturalism". By attacking concerned individuals that espouse these exact same principles as "racist", "fascist", and "white supremacist", they're indirectly attacking Russia and associating it with those slurs. It's a documented fact that the tentacles of unipolar influence are long and deeply embedded in all sorts of social and political movements, so it's reasonable to question whether these "anti-imperialist" voices are just "misguided activists" or if they're really just anti-Russian provocateurs with an ideological ax to grind.