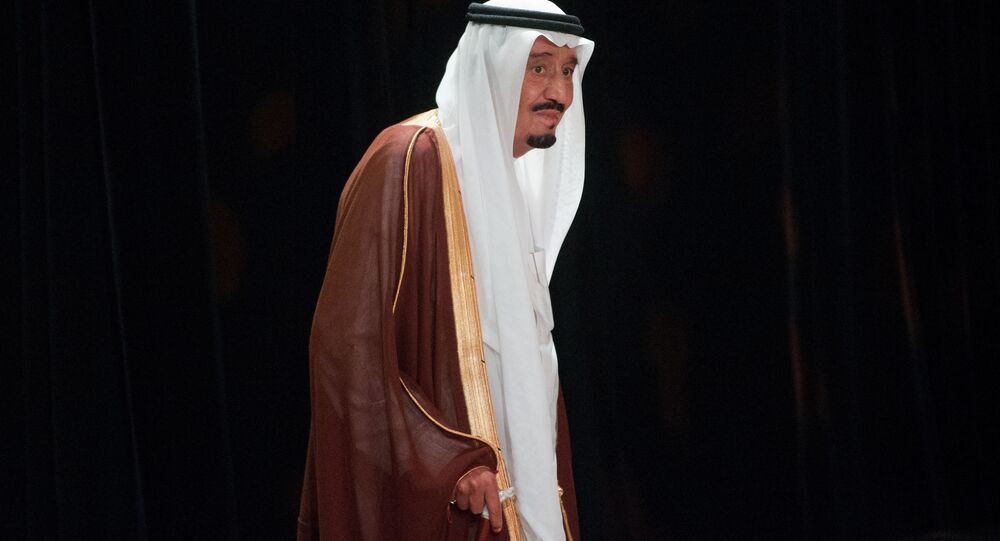 Global markets continue on a roller-coaster ride two weeks after this column revealed how Saudi Arabia had been unloading at least $1 trillion in US securities, crashing global markets in parallel to its market share/oil price war.

The House of Saud may even hold more than $8 trillion in US Treasury bonds and stocks; that depends on how much of the Aramco profits they monopolized, and how well they invested.

© AP Photo / Hani Mohammed
US Rolling in Profits While 'Aiding and Abetting' Saudi War Crimes in Yemen
A New York investment banker with solid Saudi connections confirms the Saudis coordinate their major oil moves with Goldman Sachs "and others" (he did not specify), so as not to antagonize Wall Street.

This would mean the House of Saud share in the profits with Goldman Sachs through derivatives in their oil trades. And this spells out a multi-trillion US dollar bonanza both to the Saudis and to Wall Street — considering some serious action could flow through partners of Goldman Sachs and others offshore to conceal the massive volumes.

The only thing that has filtered so far is that Goldman Sachs is not exactly in the business of antagonizing the House of Saud.

Show me the money

According to a House of Saud-related source, the share of the roughly 12,000 royal family members absorbs 40% of Aramco's oil profits. Two years ago, according to the source, this would have represented $146 billion a year in today's dollars. Considering the   astronomical increase of oil prices in 1973, 43 years ago, that would have yielded $6.2 trillion just for the House of Saud.

Apart from palaces crammed with golden faucets, yachts in the Cote d'Azur, or purple Lamborghinis, it's fair to assume most of it went to US Treasuries and securities. Then there are the state reserves — 60% of Aramco's profits; $ 219 billion, which times 43 make $9.4 trillion. These funds could not have possibly been all spent.

Saudi investments may have been badly hurt by Goldman Sachs and others during the 2008 market crash. Yet the source says the House of Saud was duly informed ahead of time — so they lost nothing.

© AP Photo / Carolyn Kaster
Heavy Burden: America Pays a High Moral & Material Price for Its Alliance With the Saudis
The key point is the House of Saud may be swimming in a — secret — sea of money, and not being engulfed by the desert of debt default.

The notion that the population of Saudi Arabia, according to the IMF, may have to face serious government austerity — after the House of Saud-provoked "worst oil price crash in modern history", engineered to punish Russia, Iran and US shale producers — is nothing short of ludicrous.

Riyadh is on a major spin spree on the need to "transform" its economy away from oil. The House of Saud is set to slash subsidies on water and electricity, with fuel subsidies further on down the road.

According to the IMF Saudi Arabia may be running a deficit of around $140 billion. But what about that secret stash of US Treasuries and securities?

And they are also "losing" China

Meanwhile, the House of Saud market share part of its oil price crash strategy is unraveling even in China. Russia and Saudi Arabia are now both enjoying roughly the same Chinese market share — around the 14% range — with Russia keeping the upper hand because Moscow accepts payments in yuan.

The House of Saud though is locked up in its petrodollar prison. Any attempt of escaping will be severely punished by the Masters of he Universe — those that send their minions to "debate" the future in places such as Davos.

© AP Photo / Hassan Ammar, File
How Saudi Arabia Wants to Privatize Its Oil But Keep the Profits
And this yuan/petrodollar disparity — with Moscow soon to distance Riyadh as China's top oil supplier — is one of the key reasons why there does not seem to be a Russian-Saudi oil price "grand bargain" deal in the horizon. The other reason is Russia — and Iran — will only accept an oil deal if Saudi Arabia accepts a political — Syrian — deal.

As Petroleum Intelligence Weekly has reported, Moscow's proposal remains on the table; it's open for a 5% output cut by OPEC (including Iran and Iraq) and non-OPEC producers.

What's certainly advancing under the radar is something way more serious; a Russia/China-based alternative monetary system. That's why the Russian Central Bank is basically not interfering with the fall of the ruble parallel to the fall in oil prices.

Russia will need a lot of rubles for the Russia/China monetary system. So Moscow's strategy is to buy rubles back from the flooded market at rock-bottom prices, using artificially boosted dollars and euros. Russia's treasury, meanwhile, also bought Russian companies shares at low market prices while repatriating at least 30% of Russian oil shares previously owned by foreigners.

Would this also help to convince the Saudis that their oil price crash strategy is leading nowhere? There's no evidence so far.

Meanwhile, Warrior Prince Mohammed bin Salman continues to practically sit on the throne — out of deference to his father, ailing King Salman. Rumors of a Riyadh coup persist. The key will be the extent of US support for Mohammed bin Nayef; the real Masters of the Universe over Washington won't tolerate the erratic Warrior Prince succeeding his father.

So the bottom line, as a House of Saud-linked source summed it up, is that "the Saudis are staying — for now — with the devil they know (the US) rather than the devil that they don't know (Russia)." All that of course may change in an instant if the alarmed Riyadh royals conclude that the devil they know is up to its tried and tested regime change tricks. But then, it will be too late.