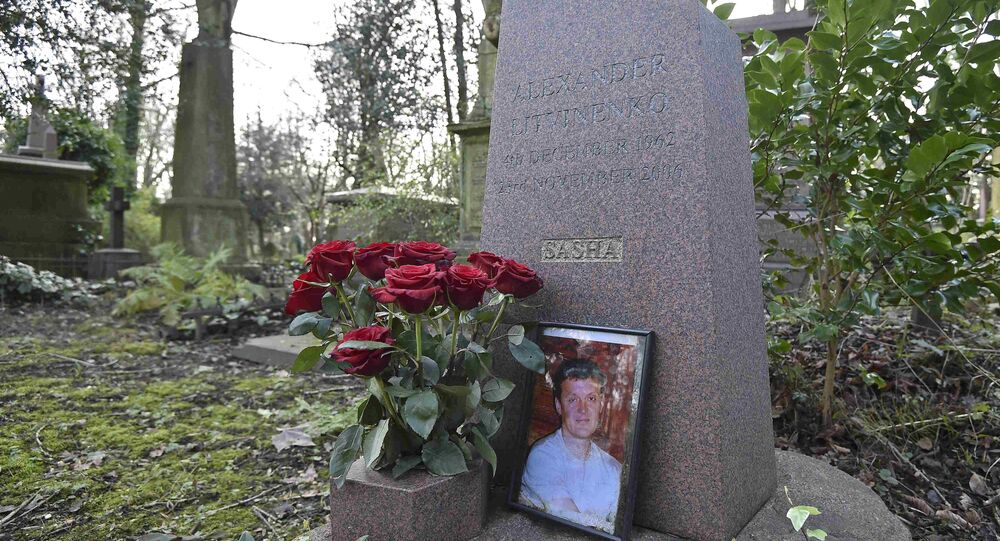 So now Russian President is a cold-blooded assassin, as well as Europe’s “new Hitler”, the saboteur of civilian airliners, sponsor of drug abuse in sports and the friend of Middle East butcher-dictators.

© Sputnik / Collage
UK Report Claims Putin to Blame for Litvinenko Death
Can the list of demonic epithets for the Russian leader get any longer? Just when you think it couldn’t, the good old British master of dirty tricks pulls out the “evil assassin” card.

Putin is fingered for ordering the murder of Alexander Litvinenko, a former member of Russia’s security service FSB.

The British so-called public inquiry published this week only said Putin “probably” ordered the killing of Litvinenko in London nearly 10 years ago. But the intended innuendo implanted in the public mind is plain: Putin is an assassin.

© AP Photo / Alistair Fuller
Moscow Regrets UK Report on Litvinenko's Death Politicized, Non-Transparent
As the Russian Foreign Ministry said in derisory response to the British report, it is all so predictable. The politicization of a criminal matter is so flagrantly transparent, it is almost cringe-making in its clumsiness.

The inquiry was ordered by the British government in October 2014, and is anything but “public”. It is based on secret evidence presented behind closed doors by anonymous British intelligence figures.

No verifiable proof worthy of a proper legal court is presented. It is based entirely on “circumstantial”, that is subjective, inference by a former British judge sitting in private, but who is then given ample media exposure to broadcast his “findings”. To call this a “judicial ruling” is a farce and an insult to the public’s intelligence.

Yet following the announcement of the inquiry’s “conclusions”, the British government immediately censured Russia over “a blatant and unacceptable breach of international law”. This is not only typical British arrogance, it is a dangerous, reckless misuse of a country’s dubious legal procedures to project an international political jurisdiction.

There is plenty of hard evidence for Russia or any other state to accuse the British prime minister of war crimes given his country’s illegal interference in Libya and Syria. But what gives Britain the right to accuse Russia’s head of state of murder, especially based on such flimsy “circumstantial” evidence? Britain’s disrespect for international norms in this regard is a new low in dirty tricks.

The corny Cold War stereotypes of “ex-KGB spies seeking revenge” is the first giveaway that this is a “psyops job”, in addition to the scripted political reaction by the British government. This latest smear fits consistently with the long-running running Western-led propaganda vendetta against Vladimir Putin.

© Sputnik / Maksim Blinov
Why Should Dutch MH17 Investigators Look Closer at Russian Evidence?
As alluded to above, the smears include Putin wanting to militarily over-run Europe to revive the Soviet Empire, to the shooting down of the Malaysian MH17 airliner over eastern Ukraine in July 2014 with 298 dead, to Russia’s air force support for Syrian President Bashar Assad. Even though the latter instance is legitimate aid to an allied country which is actually being attacked by Western-backed terrorist mercenaries for regime change.

Of the many absurdities in the British report on the death of Litvinenko, perhaps the main one is the alleged use of radioactive Polonium as a lethal poison. Two named former FSB agents are accused in the British report of having tipped the toxin into Litvinenko’s pot of tea during a private meeting at a posh London hotel. How very English. Death by a cup of tea!

But if, as the British claim, it was the work of cold-blooded, professional Russian assassins under orders from their bosses in the Kremlin the fatal contradiction in this claim is that the apparent murder was carried out with extraordinary amateurishness.

Traces of radioactive polonium were allegedly found in the London hotels where the accused Russian men stayed and even the planes they travelled on. If professional assassins were to use radioactive poison they would keep the lethal dose in a lead capsule to prevent emission of radioactivity. Our putative Russian assassins in London must have been throwing the deadly substance around themselves like aftershave, if we are to believe the findings of the British judge.

On the contrary, what careless radioactive traces in hotels, planes and elsewhere strongly suggest is that someone was laying an incriminating path to frame up the Russian men. And even at that we don’t really know if traces of radioactivity were actually found because, as noted the un-public nature of the British inquiry was based entirely on secret, unverifiable “evidence”.

This is the same kind of legal “standard” that the West uses to accuse Russian warplanes of bombing hospitals in Syria or Russian tanks rolling across Ukraine – with no verifiable evidence. It’s all down to politicized assertion and bombast.

Litvinenko defected from Russia to Britain in 2000 after he was sacked from the Russian FSB for unprofessional misconduct. He became a British citizen and worked for Britain’s state intelligence MI6. It sounds as if Litvinenko was an expedient opportunist, making nice money as an anti-Putin media writer, from which he was able to buy a fashionable house in London.

© REUTERS / Vasily Djachkov/Files
Moscow: UK Inquiry Into Litvinenko's Death Aimed to 'Demonize' Russia, Its Leadership
He was a valuable asset to the British owing to the very public allegations he made and they were able to broadcast for smearing Putin and other Russian government officials with corruption claims. As a former “Kremlin spy”, the propaganda value that the British state exploited through Litvinenko was considerable.

But then came an even more valuable propaganda opportunity for the British – Litvinenko’s death.

Who is to say that his British handlers did not bump off the Russian “former spy” with their own supply of radioactive polonium? And given Litvinenko’s personal umbrage with the Russian government for being sacked from the FSB, he could be relied on by the British to give a plausible-sounding death bed statement imputing Putin for his demise.

The putative scenario of Litvinenko’s alleged assassination by Russian agents under the direction of the Kremlin was like an investment for the British. The propaganda dividends have paid out since his death in 2006 with recurring media stories impugning Vladimir Putin.

The timing of the latest big dividend – actually openly accusing Putin of ordering assassination – is another cause for suspicion that the British “public inquiry” is just the latest twist in a long-running smear campaign.

British media are calling for more sanctions to be imposed on the Russian government and for extradition warrants to be issued. However, British officials are quoted as saying that they are constrained because of the “sensitive timing” in relation to the peace talks due to take place in Geneva next week over Syria.

“We have other fish to fry with the Russians,” said one official in explaining why the British authorities may not take more legal action against Moscow over the Litvinenko case.

The “other fish to fry” is a veiled reference to extracting concessions from Russia over Syria where the British objective is regime change against President Assad.

This has all the hallmarks of a time-honored British psychological operation. Pile up the smears to then undermine the moral authority of your opponent in order that concessions can be extracted.

For the British, Alexander Litvinenko is definitely worth more dead than alive.