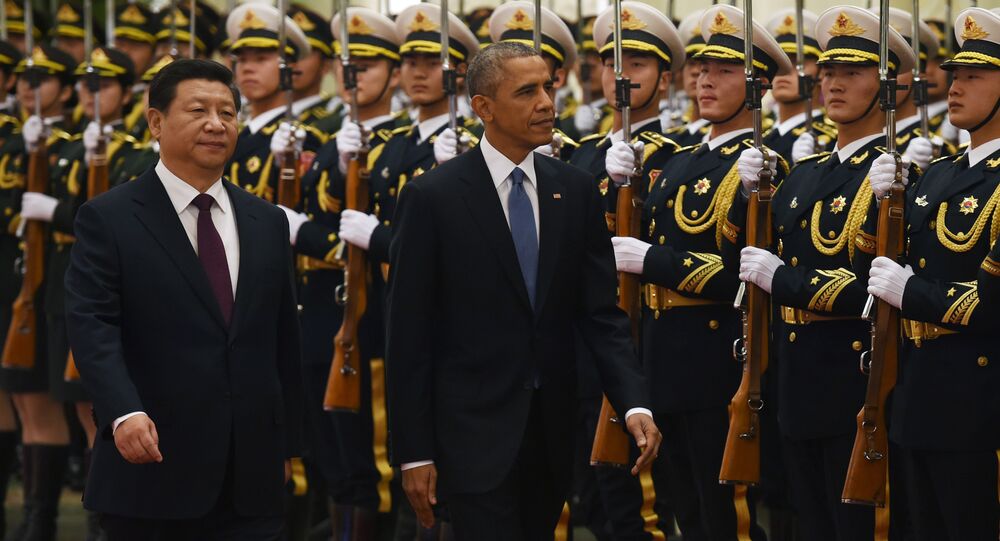 Who Wants a Third World War?

What Washington really craves is some form of coercion that would lead Beijing to open its coveted financial market to the mega-speculative financial casino of the US Big Bank system. That is not happening - as the White House has absolutely no leverage on the matter.

Chinese President Xi Jinping surfs the USA in his first state visit almost simultaneously as Pope Francis. It will be fascinating to observe how the hyperpower's decision centers will react to this double exposure to dialectical materialism — with Chinese characteristics — and the in thesis "under reconstruction" Catholic Church.

In a historic speech in Havana, Pope Francis — who broke the get-together between US President Barack Obama and Raul Castro — insisted he wants to deepen the relationship between Washington and Havana. He asked for Obama and Raul to give it all they've got as an example to the world, "a world that needs reconciliation amidst this Third World War."

© AP Photo / Gerald Herbert
Obama Must Dump the Neocons and Cooperate with Russia on Syria - US Analyst
"Third World War" was never part of the original redaction of the Pope's speech. Francis added it on his flight from Rome to Havana.

A pre-Socratic cynic would volunteer that Francis may now be in synch with "Apocalypse Now" Pentagon factions — for whom the Third World War is already on, and the crucial threats are Russia and China, with ISIS/ISIL/Daesh as a distant third.

It's more like Francis may be aligned with Russian President Vladimir Putin, who's going no holds barred to frame a genuine peace process in Syria. The real prime "threat" to the Middle East, Europe and even Eurasia is a jihadi blowback originating in "Syraq".

Not for the Pentagon, of course, whose analysts are now obsessed with contingency plans for a war against…Russia.

The latest leak on the obsession comes via a notorious neo-con operative, Michele Flournoy, former undersecretary of Defense for policy and co-founder of yet another proverbially hawkish think tank, the Center for a New American Security.

It's all about a Russian "potential aggression" against NATO, or "hypothetic" Russian aggression against the Baltics. The plans include possible Pentagon/NATO moves as well as Pentagon-only moves. The assumption is always an inevitable "Russian aggression."

So now we have a military "pivot to Russia" to complement the by now notorious "pivot to Asia" — which Beijing has interpreted for what it is: a strategic containment policy — running from military encirclement (South China Sea, Indian Ocean, Western Pacific) to trade exclusion (the Trans-Pacific Partnership, TPP), plus the usual threat of sanctions.

Now compare the Pentagon pivoting — the China chapter — with what IT America wants; business, a lot of business, which implies, obviously, no sanctions.

And then there's what the Masters of the Universe really crave; some form of coercion that would lead Beijing to open its coveted financial market to the mega-speculative financial casino of the US Big Bank system. That is not happening — as the White House has absolutely no leverage on the matter.

What Xi is up against

The first few days of Xi's agenda in the US include a visit to a new Boeing assembly line in a Seattle suburb; a dinner with Bill Gates; and the two-day US-China Internet Industry Forum. From that, it's easy to identify Beijing's priorities.

With Obama, Xi will have to discuss notorious flashpoints; Taiwan; the South China Sea; cyber-security; and negotiations towards a possible adoption of a bilateral trade treaty.

© REUTERS / SANA/Handout via Reuters
Assad Must Go? No, American Arrogance Must Go!
As if the pivot-obsessed gang was not enough, Xi will be under a lot of pressure in the US on the human rights and cyber-security fronts. Yet there's no evidence most of the hyperpower's decision making circles really know what he's up against in China.

In roughly three years in power, Xi's number one task has been to unleash a monster anti-graft campaign. That encompasses military and civilian spheres. The extremely feared Central Commission for Discipline Inspection is Xi's weapon of choice. And no one escapes the Commission's tentacles. Not even former security superstar Zhou Yongkang and former top presidential aide Ling Jihua.

So Xi is simultaneously cleaning up the Chinese Communist Party (CCP) and the People's Liberation Army (PLA). One can barely imagine the resistance factor — to the point that Chinese insiders stress Xi has made extremely powerful enemies across the board; retired political heavyweights; top military officers; influential government officials; state-owned enterprise (SOE) honchos; an array of "princelings" — the children of historic revolutionaries; and last but not least a dodgy flotsam and jetsam that laundered their fortunes in Macau casinos and luxury Hong Kong malls.

Special Xi scalps include the so-called Shanxi gang — which totally controlled the politico-economic environment in this province abundant in coal — and the so-called petroleum gang, which controlled all things oil in China.

Premier Li Keqiang, at the World Economic Forum in Dalian, has been forced to stress the clean up is a question of "structural adjustment", and does not affect China's economy.

The facts are stark; China may have deregulated a lot. But capital, energy, raw materials and land still respond largely to the central government's priorities. No US lobbying will change that.

This also means that if you are a perfectly placed and well connected — the supremacy of guanxi — Chinese official, you're the King of Business. These functionaries, essentially, are at the root of so many "distortions" in the Chinese economy. And that's what Xi is essentially trying to change.

© Flickr / US Pacific Fleet
Pax Americana: True Military Might or Glitch in the Matrix?
The massive tweaking of the Chinese model includes less reliance on exports of manufactured products; a much more rigorous planning in terms of spending on infrastructure; and redirecting investment on industrial capacity.

Wishful thinking about China crashing is nonsense. Those days of the Cultural Revolution are long gone. China is slowly but surely shifting towards a spectacular new paradigm of integrating the whole of Eurasia into a booming industrial renaissance. Every change in China points towards this transition.

The transition also means a shift away from the massive export linkage to the US and EU and a more balanced economy across Eurasia, while keeping trade/commerce as much as possible with the West.

Does this feel like a state/civilization that craves a Third World War?

Will Chinese Aircraft Carriers Become a 'Nightmare' for US Navy?

Russophobia For Dummies: How To Write Articles And Influence People