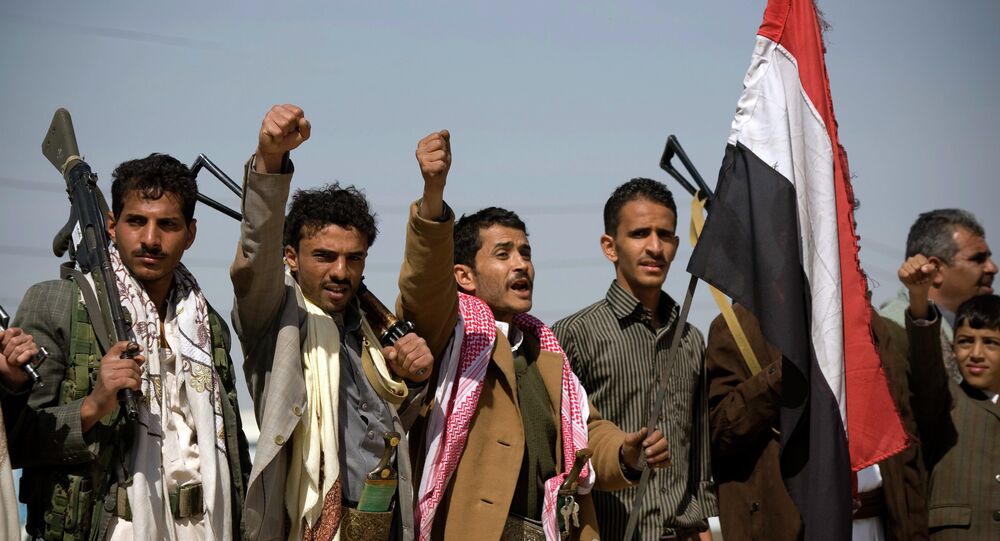 Yemen is in turmoil, as a myriad of interest groups, including those supported by Saudi Arabia, face off against one another and push the country closer to the edge of civil war.

Ever since Hadi’s Saudi-supported coup attempt spectacularly failed in late January, Yemen has been thrown into chaos. The entire country seems to now be united only in terms of its problems, but unfortunately remains divided in dealing with what happens to be its most important one – Saudi Arabia. The House of Saud is playing it cool, however, since it understands the enormously high risks of staging a conventional intervention there, opting instead to offer implicit support for a temporary Cold War-like redivision of the country while it pumps money, arms, and fighters to its anti-Houthi proxies in the north. Like all of Riyadh’s regional plans (most notably in Syria), this is yet another untenable ‘solution’ fraught with the immense risk of terrorist and humanitarian blowback.

A Return To Cold War Divisions (For Hot Saudi Profit)

© Sputnik / Alexei Druzhinin
Yemen President Calls Houthi-Controlled Sanaa 'Occupied Capital'
The latest news coming out of Yemen is that former Prime Minister Hadi fled the capital of Sanaa and is now trying to reassert his power in Aden. This event carries with it enormous significance, sine Sanaa used to be the capital of the Yemen Arab Republic (‘North Yemen’), while Aden was its analogous counterpart in the People’s Democratic Republic of Yemen (‘South Yemen’). Both Yemens were divided for much of the Cold War and only united in 1990. A brief civil war broke out with the South’s renewed call for secessionism in 1994, but was quickly squashed by then-President Ali Abdullah Saleh, who incidentally was also the former president of North Yemen.

Nowadays, the fear of a Yemeni redivision is stronger than ever, since Saudi Arabia, Qatar, the UAE, and Kuwait, the main members of the Gulf Cooperation Council (GCC), have opted to move their respective embassies from Sanna to Aden, where Hadi is currently trying to reassert his power. This belies a de-facto recognition of South Yemen, since the Houthis’ administration extends only throughout most of former North Yemeni territory. The Southerners are evidently pleased by this development since it affords them and their secessionist and/or pro-autonomy cause (which varies depending on the group) increased value to regional hegemon Saudi Arabia vis-à-vis their shared conflict with the Houthis.

Compared to the rest of the country, the former territory of South Yemen (which is currently loyal to Hadi and Saudi Arabia) comprises 68% of Yemen’s total land but houses only 17% of its population. Be that as it may, its importance lays precisely in the fact that it possesses almost all of the country’s hydrocarbon reserves, which represent over 90% of Yemen’s exports and more than 63% of the government’s revenue.

If South Yemen is kept under the Saudi’s thumb, this means that Riyadh would de-facto exercise control over the most significant economic assets of formerly united Yemen, which would allow it to retain the profits for itself and its new satellite state while depriving the much more populous Houthi-administered North of its financial lifeline.

As it stands, Saudi Arabia’s control of South Yemen’s territory and resources places it in an advantageous position to wage a prolonged proxy battle against the Houthis. It knows that the longer the impasse lasts (which it likely will, since the Houthis have neither the intention nor the means to conquer Aden), the more devastating its war of attrition will be against the millions of people living in the former territory of North Yemen.

The state coffers there will quickly run dry as a result of being cut off from Southern oil profits, and the evaporation of state finances will lead to an evaporation of state control as citizens no longer receive any government-administered benefits. The Saudis hope that this will compel the population to rise up against the Houthis and overthrow them on their own so that the GCC doesn’t have to directly invade and do it for them.

© AP Photo / Hani Mohammed
Who is Footing the Houthis' Bills?
In the meantime, the Saudis will continue funneling weapons, money, and fighters to the anti-Houthi militias in the north of the country in order to expedite this process, but as with what has been documented to have occurred in Syria, Riyadh’s anti-government ‘aid’ will likely translate into supporting terrorist groups (either intentionally and/or unintentionally). Al-Qaeda is already active in the country, and in the event that law and order completely breaks down in the North (which is what the Saudi-managed blockade is intended to do), a constellation of smaller, but no less dangerous, terrorist groups may appear, perhaps even resulting in a few ISIL affiliates. Despite this, the Saudis will likely remain reluctant to commence a conventional GCC invasion, understanding fairly well that the North’s mountainous geography could bog its soldiers down and dramatically increase the chances that thousands of casualties could quickly pile up, much as they did for Nasser during Egypt’s failed intervention there in the 1960s.

But why does Saudi Arabia want to control the former territory of North Yemen anyhow, and why isn’t it content with its proxy conquests in the South? Here’s a look at what it wants there, as well as the perilous risks involved:

Saudi Arabia would like to control the north reaches of the Bab-el-Mandeb strait connecting the Red Sea and the Gulf of Aden (Indian Ocean). Through the GCC, it already controls half of the Persian Gulf and the Strait of Hormuz, and it envisions doing the same on the other half of the Arabian Peninsula. It hopes that its role as partial gatekeeper over both geostrategic straits will lead to an expansion of its global influence.

There’s been previous talk about Yemen joining the GCC, and if a pro-Saudi government (presumably led by Hadi) pulls the full country into the organization, it’ll provide the region’s sheikh’s with millions of cheap laborers to power the group’s post-oil economy. This ‘real economy’ of goods and services could be invested in and exploited by the oil kingdoms so that their own citizens can continue to live in relative comfort, while the Yemenis bear the brunt of the hard labor necessary to make this economic apartheid happen.

The numerous terrorist groups that are expected to infest Yemen during the Saudi’s anti-Houthi Takfiri jihad could very easily boomerang back into the Kingdom and wreak havoc among its provinces near the border. On top of that, the Saudi-South Yemen financial blockade of North Yemen could realistically create a humanitarian crisis (concurrent with the aforementioned terrorist one) that results in potentially millions of people fleeing into the Kingdom and destabilizing it.

The situation might spiral so out of control that Saudi Arabia and the GCC would have no choice other than to formally intervene. This could turn Yemen into the tomb of the House of Saud, since not only would it trap it in a never-ending guerrilla war, but it could also create aftershocks powerful enough to rock the entire governing foundation of the ruling family and set the stage for the kingdom’s total collapse.

Kuwait Chooses Port City of Aden, Not Sanaa to Reopen Embassy in Yemen