Who is Footing the Houthis' Bills? 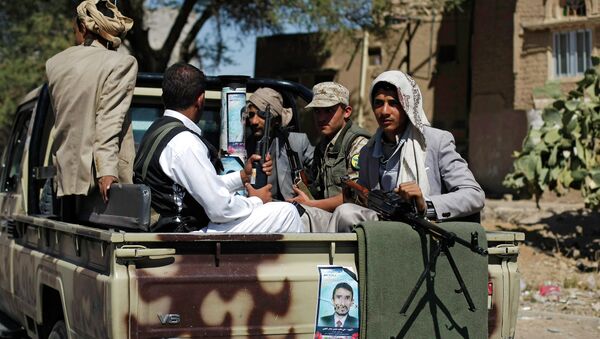 Amid an increase in violent clashes between Yemeni factions including the increasingly powerful Houthis and other armed groups such as al-Qaeda in the Arabian Peninsula (AQAP), speculation mounts on the factors behind the Shiite group's recent rise to power.

Yemen Faces Disintegration as Loyalist Forces Seize Parts of Former Capital
A political analyst from Iran has sought to shed light on the relationship between Shiite Iran and the Houthi Zaidi Shiites of Yemen, writing that Houthi denials of financial backing from Iran are most likely based on a desire to avoid the further political sectarian polarization of their country. They took control of Yemen's capital, Sanaa, in September 2014 and have held it ever since.

Shahir Shahid-Saless, who is based in Canada, explained in a blog post last week on Al-Monitor.com that the Houthis seek to share power in Yemen rather than govern it unilaterally, and as such do not want to  add fuel to resistance against them ahead of any prospective negotiations.

"There is a near consensus among Yemen experts that no single tribe or political current can individually govern the country. Although pictures of ayatollahs Khomeini and Khamenei and Hezbollah leader Hassan Nasrallah have been carried by Houthi supporters during demonstrations, in the last year or so, no member of the Houthi political bureau has made any statement praising Iran."

The Houthis are widely suspected to receive financial support from Iran, as well as military training from the Iranian Revolutionary Guard. The Yemeni government in 2013 announced its forces had intercepted a ship from Iran named the Jihan 1, suspected of carrying arms to Houthi insurgents, a claim which Tehran denied.

While it is politically expedient for the Houthis to deny links with Iran, Shahid-Saless explains that the Iranians are more forthright in their moral support for the Houthi rise to power. The government in Tehran regards the Houthis as part of the of the "axis of resistance," led by Iran against Western interests in the Middle East and comprising Iran, Hezbollah in Lebanon and Shiite militants in Iraq and Syria.

Turkey Joins Growing List of Countries Closing Embassy in Yemen
In recent weeks the Houthis have strengthened their hold over Yemen following the departure of President Abd-Rabbu Mansour Hadi on January 22. Hadi, who enjoyed the backing of the US and neighboring Saudi Arabia, resigned after being put under house arrest by the Houthis in a dispute over the country's proposed constitution. The Houthis have since declared plans for a new interim assembly and presidential council.

A report from the International Crisis Group NGO at the end of January highlighted the necessity for a quick compromise in Yemen, warning of the "very real prospect of territorial fragmentation, economic meltdown and widespread violence if a compromise is not reached soon." The report also highlighted the Houthis "notable success in battling al-Qaeda," though such success has come at the price of the alliance of some Yemeni tribes with the AQAP, in a sectarian alignment against the Houthis.