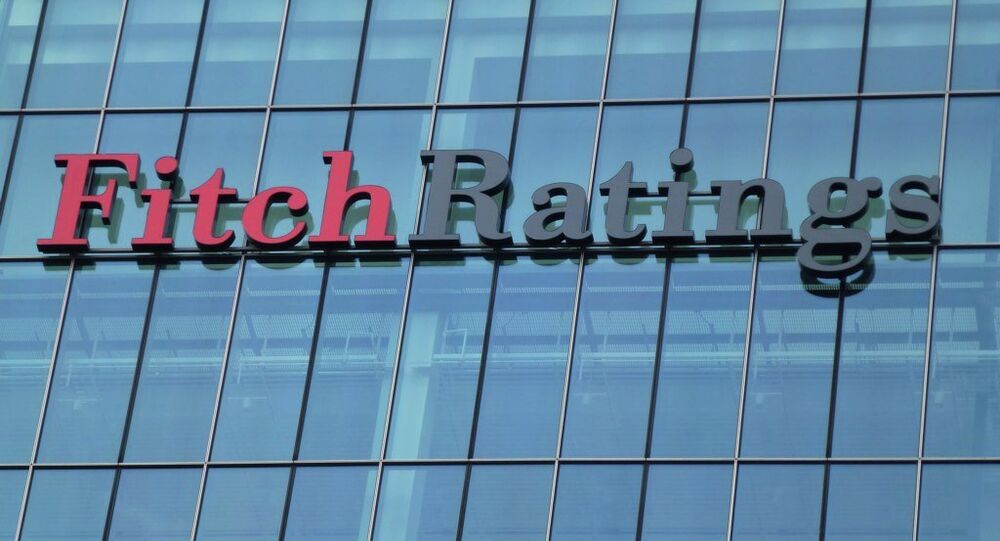 © Sputnik / Michail Fomichev
Fitch Takes Action on 13 Russian Companies After Country's Rating Downgrade
MOSCOW, January 16 (Sputnik) – This would normally be bad news for Europe, but hatred for "Putin’s regime" in Brussels is stronger than the self-preservation instincts of European politicians.

If in the case of Cyprus and Portugal in 2012 a similar slump in ratings prompted some embarrassment in the European Commission and a stream of compassionate articles in the EU’s media, Russia’s presumed woes are provoking a much more self-satisfied "I told you so" sentiment. Headlines like "Russia is paying for a delay in reforms" and "Putin’s isolation starts to bite" abound.

But what reasons do Fitch Ratings and Standard & Poor’s have for being so pessimistic about Russia? And why are they not as pessimistic as, say, Anders Aslund, a senior fellow at the Peterson Institute for International Economics and a former adviser to late Yegor Gaidar, the main architect of Russia’s oft-reviled "shock therapy" reforms of the 1990s? Aslund predicts that the national economy will contract by 8-10 percent, and Fitch magnanimously limits itself to 2.9 percent.

© Sputnik / Alexei Filippov
Rating Agency Official Says Possible S&P Junk Rating to Affect Russian Financial Markets
Ben Aris, the editor-in-chief of Business New Europe, the only English-language publication which covers ALL the countries of the former Soviet Union and the former Soviet block in Europe, claims the answer is simple: the doomsday predictions are based on some very shaky evidence.

"If you look at the figures and not the Western headlines, you will see that Russia is not in a crisis," Ben Aris says. "There have been no significant bankruptcies, no bank runs and the budget is still in the black, with debts much lower than in the post-Soviet countries, let alone in such countries as Greece or Italy. Russia is never as bad as the Western economists describe it. These economists usually have a very particular 'love' for Russia."

"If you look at the figures and not the Western headlines, you will see that Russia is not in a crisis," Ben Aris says.

Ben Aris, who has been following the ups and downs of the Russian economy for more than 20 years, points to the fact that the Central Bank of Russia could easily sustain the ruble. Additionally, the foreign debts of private Russian companies are still counted as "good" debts by international creditors. "With $120 billion of required debt repayments next year, Russia has the resources to cover these debts three times over," Ben Aris notes. “The Central Bank could easily prop up the ruble last December with its $420 billion in reserves, but it preferred to keep the strategic reserves intact."

© Sputnik / Vladimir Pesnya
Fitch’s Downgrade of Russian Rating to BBB- to Have Little Impact:RusRating
The trust in Russia’s decline, and the blind faith in the "big three" American rating agencies which the EU and its media continuously demonstrate – this faith is not in Europeans’ own interests. Let’s not forget the Europeans’ skepticism about the three remaining American credit rating agencies just 2-3 years ago, when the EU’s own ratings were plummeting. At the time, Germany’s finance minister Wolfgang Shauble blasted America's big three agencies (Fitch, S&P’s and Moody’s). Shauble said the EU needed its own rating agency. Work on this new agency was reported to have started in 2012, but it never produced any results.

In recent years, the EU made so many blunders (its support for the violent regime change in Ukraine in February 2014 was the biggest such blunder), that the German news magazine Der Spiegel allowed itself to make an ironic comment on the EU’s new pet project.

"The European Commission is not willing to directly support the creation of such an agency, for fear of impairing this agency’s credibility from its very beginnings," Der Spiegel wrote ironically in 2012. None of the disasters Standard & Poor’s predicted would occur in Europe in 2013 ever became a reality.

© Flickr / kavitakapoor
Fitch Decision to Downgrade Russia's Credit Rating Political Move: Lawmaker
It is interesting to note that Anders Aslund contradicts himself when he makes his doomsday predictions. Here is a paragraph from his recent work: "Russia has no problem with its budget balance, its public debt, or its current account. They all look rock solid. Yet we are seeing the beginning of a depreciation-inflation cycle and economic decline," Aslund writes.

It must be noted that Mr. Aslund has been predicting Putin’s (and thus Russia’s) decline and fall since at least 2010 – on a regular basis. The lack of doomsday facts to back up his doomsday promises – this was the main problem with Mr. Aslund’s writings.

Contrary to the Western analysts’ expectations, Russia’s consumer spending did not decrease, but grew during the winter of 2014-2015. Russians bought a record number of cars and some made long-postponed visiting tours to places like Italy or Greece. By the way, these countries’ public debts, export-import balances and budget deficits look much less pretty than the Russian ones. So, in fact, it is only natural for not-so-poor Russians to visit these not-so-successful EU members – as tourists.