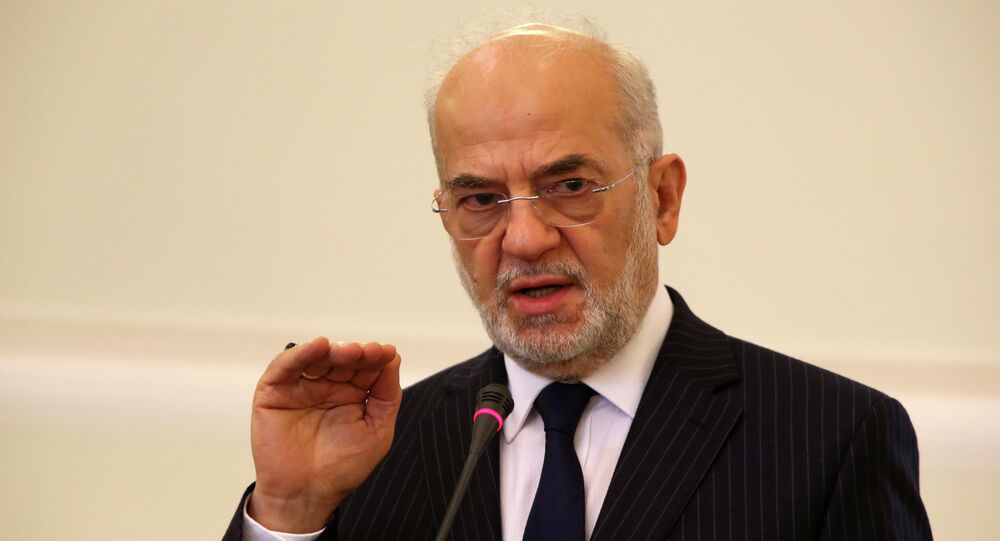 Reading Chinese in the Mideast

The Iraqi Foreign Minister, Ibrahim Jafari, has confirmed that China has been assisting with airstrikes in the country, but did not specify the details except to say that it is not involved with the current coalition. The arrangement has been going on since September when he met his Chinese counterpart, Wang Yi, at a UN anti-terrorism meeting.

MOSCOW, December 22 (Sputnik) — China has always been staunchly against terrorism, and it is currently involved in its own year-long anti-terror operation in Xinjiang. The news that it would be assisting Iraq against the Islamic State (IS) came as a surprise for many, since this marks the first major commitment China has made to combating terror outside of the country.

The timing of the announcement may have been deliberately arranged to underscore Beijing’s seriousness towards this issue as it ramps up operations in Western China. Commenting on Jafari’s confirmation of China’s agreement with Iraq to exchange intelligence and train Iraqi soldiers, Foreign Minister Spokesman Hong Lei said that:

“China has been fighting terrorism and has been providing support and assistance to Iraq, including the Kurdish region, in our own way, and will continue to do so within the best of our capabilities”, without providing any additional information.

This makes China’s involvement all the more mysterious, and observers the world over are trying to interpret what the Chinese are saying about their new activities in the Mideast.

The biggest question many are wondering is what form China’s assistance to Iraq is taking. Is it airstrikes, weapons sales, on-the-ground training and advisory activity, or some type of combination of these? More than likely, airstrikes can be ruled out, as the US would have likely identified Chinese participation in them by now and would have leaked the information to the media (as it has done with Iranian airstrikes in the past).

© AP Photo / Hussein Malla
Iraqi Kurds Break IS Siege of Mount Sinjar: Reports
When it comes to weapons, it’s not certain exactly what China is selling Iraq, but it’s very probable that it may have procured some aircraft and/or missiles for its Middle Eastern ally. Back-end infrastructure support such as radars and targeting systems might also have been sold to the Iraqis. After all, China is the largest foreign investor in Iraq’s oilfields (most of which are located in the Shia-dominated south), so it has a physical stake in the government’s victory against IS aside from the negative worldwide terrorist repercussions that China would have faced in Xinjiang if defeated.

Jafari made it clear that the training of personnel is occurring, and this is an important facet that will be discussed more below. As for the intelligence exchange, this probably takes the form of satellite and signal data collected by the Chinese. Like any Great Power, Beijing may have some human intelligence presence on the ground in Iraq, but it’s probably lagging behind that of the West and its coalition allies and isn’t as crucial. Therefore, the technical aspects of the intelligence exchange are probably the highlight of this relationship.

The New Center Of The World

The Mandarin character for China is said to translate to ‘the center of the world’, but it seems as though the Middle East is becoming the new global gathering place, especially in terms of military deployment. Prior to the anti-IS operations that ever more foreign powers are partaking in, there was the crisis over piracy in the Gulf of Aden. In response, countries sent their naval forces to patrol the area, leading to an increase in international maritime militarization in the southern reaches of the Middle East.

© AP Photo / EyePress
China to Send First UN Peacekeeping Battalion to South Sudan in January
Now, it seems as though the critical frontier between Syria and Iraq has replaced the Gulf of Aden between Yemen and Somalia as the newest global hotspot. Instead of a naval buildup (which could be useful for countries trying to test their far-reaching naval capabilities and experiment with soft combat scenarios), there’s an air and ground one (save for the new British naval base in Bahrain) which can fulfill hard combat scenarios, even if some of the countries involved aren't sending troops to the front lines.

For example, by actively or passively assisting in airstrikes (be it through direct bombing or providing bombs and coordinates), countries can receive valuable testing data and feedback about the utility of their aircraft, munitions, or intelligence, even if they’re passed second-hand to Iraqi forces. They can also assess the effectiveness of their training and advisory services by how well the Kurdish and Iraqi forces do in combat.

It should also not be overlooked that China specifically highlighted its assistance to the Kurdish region, which Iran, the US, and other Western countries have already said they were supporting. It may be that the world powers are preparing for the seemingly inevitable day when Kurdistan will be independent (no matter how much drawn-out political maneuvering this takes), and are trying to create privileged relationships with its political and military elite in advance.

© Sputnik / Michael Klimentyev
Payments in National Currencies Within SCO Could Curb Speculator Activity
Importantly, China’s participation in anti-IS activity (irrespective of its form) may say a lot about the future activities of the Shanghai Cooperation Organization (SCO) that Russia and China de-facto lead. Most of the Central Asian states (except for Turkmenistan) are in the group, together with Russia and China, which combat three primary challenges; terrorism, separatism, and extremism. With the NATO drawdown in Afghanistan by year’s end, it’s been widely predicted that the country’s destabilization will flow northwards into the southern SCO states, and could then migrate over to Russia’s Caucasus or China’s Xinjiang.

Uzbek President Islam Karimov said last week during Putin’s visit to Tashkent that IS-like elements and tactics could infiltrate Afghanistan and carry on north, and that he therefore supports a Russian presence in the region. Russia is already aiding Syria in its anti-terrorist crusade, combining the experiences of Chechnya and its previous experience guarding the Tajik border, Moscow is well-versed in both the old and new realities of terrorism. Of the two then, China is the one which is only now branching out in its anti-terror diversification through its international involvement in Iraq, as it clearly understands the future threats that global terrorism poses to Xinjiang. Thus, keeping both of their experiences in mind (especially in fighting against IS), it may be that Russia and China are gearing up for a multilateral SCO operation in Central Asia next year to defend the region from Afghanistan’s dangers, and more closely apply their Mideast experiences to an area closer to home.