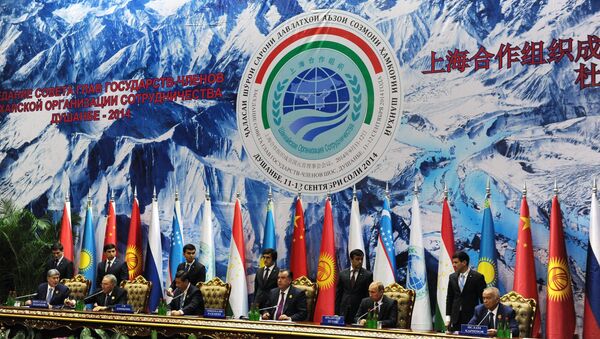 © Sputnik / Michael Klimentyev
/
Go to the photo bank
Subscribe
Deputy Director General of the Center for Political Information claims that transition to payments in national currencies within the framework of the Shanghai Cooperation Organization may reduce speculator pressure on member states' stock exchanges.

MOSCOW, December 16 (Sputnik) — A transition to payments in national currencies within the framework of the Shanghai Cooperation Organization (SCO) may reduce speculator pressure on member states' stock exchanges, the Deputy Director General of the Center for Political Information told Sputnik News Agency, Tuesday.

"The problem is that the participants of the foreign economic activity are used to acquiring additional profits from the possibility of having a lot of currency. This particularly concerns exporters who got used to receive dollars and euros and, depending on the economic situation, to invest in economy, or, more often, to place free money in deposits and speculate on currency exchanges," Alexey Panin said.

The economy of Kazakhstan has recently suffered from an exchange crisis, similar to the one that Russia faces now.

"In terms of currency Russia and Kazakhstan are more of the developing countries, rather than the developed ones. Their currency is linked to the commodity market. Due to strengthening of dollar, both [Russian] ruble and [Kazakh] tenge show similar [negative] dynamics," Panin said.

Panin is sure that a transition to payments in national currencies between SCO countries will enable member states to reduce speculative pressure. Kazakhstan is worried by external influence on its national currency and is interested in stabilizing the currency to minimize potential risks from speculators.

On December 15, the Prime Minister of Kazakhstan Karim Massimov called on SCO countries to use national currencies for mutual payments.

"We already have an experience on the bilateral level, which could shift to the whole organization," Massimov said during the SCO meeting.

"Today, effective use of the existing resources is essential for minimization of consequences of global economic shocks," he added.

During the same meeting, Russian Prime Minister Dmitry Medvedev said that a joint bank could be established on the same basis as the Eurasian Development Bank that currently operates in the region.

At the moment, single payments between SCO countries in national currencies are conducted in "test mode," the Executive Secretary of the SCO Business Council Sergey Kanavsky told Sputnik.

"Russia, China and Kazakhstan are involved in those payments more often. Uzbekistan, Kyrgyzstan and Tajikistan are also trying to link, but they still get accustomed," he said.

First initiatives with regard to payments in national currencies within the framework of the SCO were taken back in 2002. Several specific proposals to carry out such payments have since been made by financial and banking associations, as well as by business structures, Kakaevsky said, adding that such transition could be easily implemented if sufficient political will exists.

The SCO is a Eurasian political, economic and military alliance founded in 2001 in Shanghai by the leaders of China, Kazakhstan, Kyrgyzstan, Russia, Tajikistan and Uzbekistan. India, Iran and Pakistan, as well as Mongolia and Afghanistan have observer country status in the organization, while Belarus, Turkey and Sri Lanka are considered to be dialogue partners.