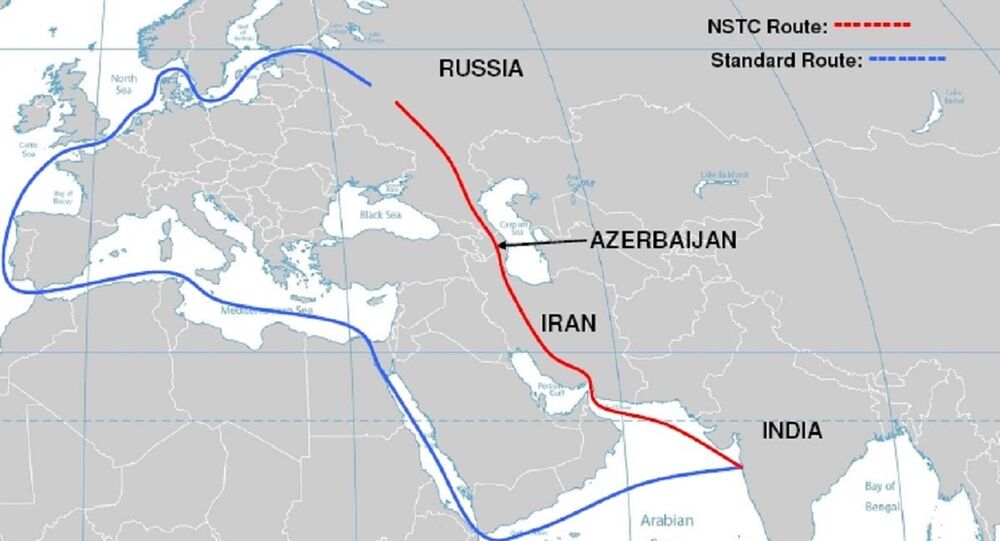 The idea for the creation of a major transport corridor through Iran goes back the early 2000s, when Moscow, Tehran and New Delhi signed an agreement on a 7,500 km route to transport goods from India and Iran to Russia and Europe using a combination of maritime, overland and railway infrastructure.

Earlier this month, the Chabahar Free Trade Zone Organisation's director general Abdul Rahim Kordi outlined the benefits of the formation of a trade route between Mumbai, St. Petersburg and Hamburg via Iran’s southeastern Chabahar Port, with the corridor running northwest through Iran to Bandar-e Anzali along the Caspian coast, through the Caspian Sea to Russia’s Astrakhan region, and then northward toward Europe.

Speaking to Iranian media, Kordi outlined a series of benefits from the route, ranging from faster delivery times to its potential role in further strengthening Iran’s relations with its neighbours. He added that in some cases, the transport corridor would be able to replace Egypt’s Suez Canal in terms of overall efficiency.

Specifically, the official explained that the corridor will more than halve the transit time of goods to and from Russia, from 38 days today to 14-16 days, when activated.

Iran has committed significant resources to the project, Kordi said, allocating hundreds of  million euros for the development of railway infrastructure, with Chabahar Port itself currently in the process of increasing its cargo capacity from 2.5 million tons to 8.5 million tons annually. New Delhi had committed the equivalent of about $14 million to the port’s development for the years 2020-2021.

Calling Iran the “terminal of the world”, Kordi stressed that Chabahar, Iran’s sole oceanic port, has the potential connect the world both east-to-west and north-to-south.

Speaking to Al-Monitor about Iran’s ambitious plans to become a major global transport corridor, Suez Canal Authority spokesman George Safwat assured that the 7,500 km India-Iran-Russia trade route wouldn’t be able to compete with the Egyptian canal in terms of deliveries from India to Hamburg, given that it requires for goods to be shipped via sea, road and rail. Furthermore, he said, it takes 19 days to ship a container from India to Hamburg, instead of the 20+ days expected via the Iran-based corridor.

However, Iranian affairs expert Mohammed al-Said Idris of the Cairo-based Al-Ahram Center for Political and Strategic Studies  emphasised that the new trade route is not aimed at harming Egypt’s interests, but rather as a means to serve Iran’s own economic interests, taking tough US sanctions into account.

Earlier this year, Indian defence and strategic affairs expert Shishir Upadhyaya penned an analysis in which he explained that the creation of the long-awaited India-Iran-Russia trade corridor would not only boost trade between the nations, but potentially help to blunt the impact of US sanctions on the Islamic Republic.

Specifically, he noted, the new route should cut down transit time between Russia and India by as much as 62 percent, and thus aiding Moscow and New Delhi’s ambitious bid to boost trade from $11 billion in 2019 to $30 billion by 2025.

“Activation of the INSTC would also unlock huge opportunities for landlocked Central Asian countries to trade in both directions,” Upadhyaya emphasized, pointing to recent efforts by Moscow to facilitate a free trade deal between India and the Eurasian Economic Union (which along with Russia currently includes Armenia, Belarus, Kazakhstan and Kyrgyzstan).

India’s state-owned Container Corporation of India (Concor) and Russian Railways Logistics signed a memorandum of understanding on the transportation of cargo between the two countries via Iran based on a single invoice in March, with the route expected to become operational within months.

Russia, Iran and India proposed the International North-South Transport Corridor (INSTC) back in the early 2000s, although for many years the project was deadlocked by bureaucratic roadblocks and infrastructural limitations. When fully up and running, the annual expected capacity of the INSTC could reach 20-30 million metric tons of goods per year. More ambitious iterations of the project even propose the creation of a massive 765 km+ canal from the Caspian to Iran’s Indian Ocean coast, although its vast expense (estimated to be the equivalent of between $6-$10 billion) seems to have put that project on hold.

'Like Putting a Knee to One's Neck': Russia Slams US 'Maximum Suffocation' Policy Against Iran in UN