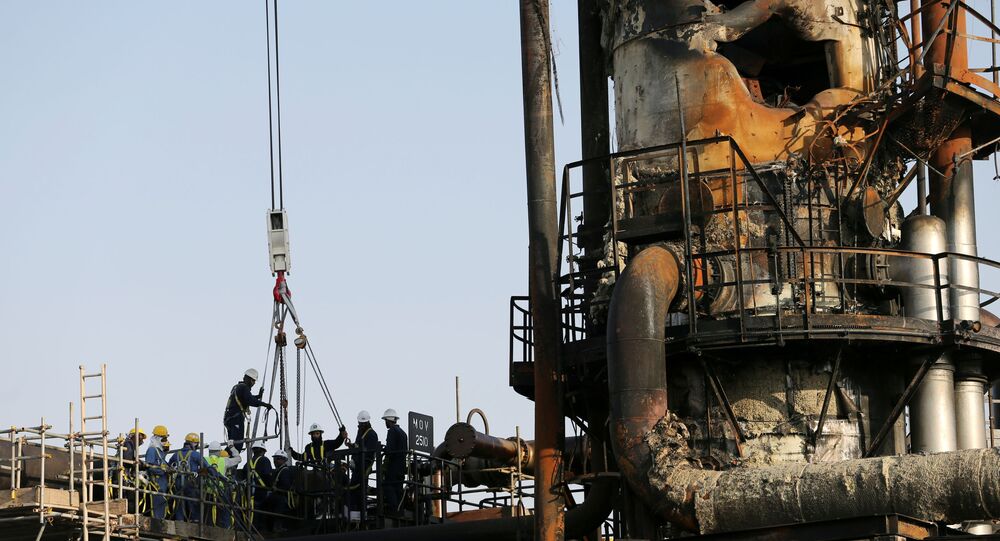 Saudi Aramco to Return to Full Capacity in November, Attacks Had ‘No Impact’ on IPO Plans – CEO

Earlier, Saudi Aramco’s CEO said that last month’s attacks on the country’s oil facilities had galvanised the company to quickly rebuild and to come out of the incident “stronger than ever.”

Saudi Aramco Chief Executive Officer Amin Nasser has announced the time frame by which he expects the oil giant to restore full production capacity after last month’s drone attacks, which temporarily cut the Kingdom’s oil output in half and sent oil prices soaring.

Speaking at the Oil & Money conference in London on Wednesday, Nasser promised that Aramco would restore full capacity by late November, with average October crude output expected to amount to 9.9 million barrels per day (about 16 percent less than the company’s average pre-attack output capacity of 12 million barrels per day).

.@Saudi_Aramco's Nasser tells #OM2019 "The attacks had no impact on the IPO whatsoever. If anything, it has made the company stronger in the eyes of investors."

Nasser also emphasised that “not one single customer” was affected by the cut in output after the attacks, with the company succeeding in efforts to calm the market and proving to its customers that “we are a reliable supplier.” He added that the attacks did not affect the company’s bottom line.

The CEO said a final decision on the date of the oil giant’s market debut has yet to be made. Aramco earlier announced plans to sell between 1 and 2 percent of the company in a local stock market listing, with more share sales possible internationally at a later date. Earlier, sources told Reuters that IPO prospectuses may be released on October 25 and 27, in Arabic and English.

© AFP 2021 / FAYEZ NURELDINE
A picture taken on September 15, 2019 shows an Aramco oil facility at the edge of the Saudi capital Riyadh.

Nasser called the mid-September strikes on Aramco facilities “an attack on the global economy,” and not only on Saudi Arabia, and, in a possible dig at US allies, complained about “an absence of international resolve to take concrete action,” which he said “may embolden the attackers and indeed put the world’s energy security at greater risk.”

The aerial attacks were "an attack on the global economy, not just an attack on Saudi Arabia or @Saudi_Aramco," says Nasser. #OM2019

“You heard the minister of foreign affairs and I think he spoke enough about [where] the attacks [are] coming from. It’s instigated by Iran for sure, there’s no doubt,” Nasser said.

On September 14, multiple drones targeted Saudi Aramco’s Abqaiq and Khurais oil processing facilities, cutting Riyadh’s daily net oil output in half and leading to the suspension of the production of some 5.7 million barrels of oil per day. Although Yemen’s Houthi militia repeatedly claimed responsibility of the attacks, and warned of further attacks unless Riyadh ended its military campaign in Yemen, Washington and Riyadh have blamed Iran. Tehran has denied any involvement in the incident, and accused the US and its allies of switching from a policy of “maximum pressure” to one of “maximum deceit.”

Saudi Arabia and a coalition consisting mostly of other Gulf States plus Egypt launched a military operation in Yemen in March 2015 in an attempt to restore ousted Yemeni President Abdrabbuh Mansur Hadi to power. Since then, the Houthis have launched dozens of drone and missile attacks against targets inside Saudi Arabia itself, targeting everything from airports and military bases to population centres.