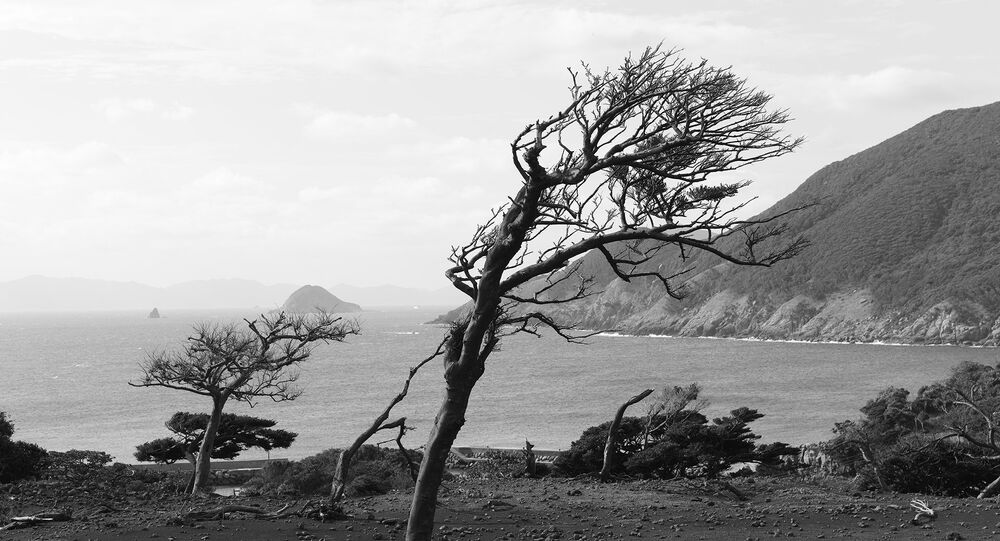 Japan’s government said the nation’s economic growth was in the red for the second time this year last quarter, suggesting Tokyo could change its economic and trading policies, and ramp up its push for a greater competitiveness in the international arena.

Kristian Rouz — A new report from the Japanese government suggests the island nation's GDP growth rate dropped into the negative territory for the second time this year.

However, the two periods of contractions were separated by a quarter of robust growth, meaning Japan's economy is not in a recession quite yet — albeit the downside effects of the global trade tensions might eventually take their toll further down the road.

© AFP 2019 / FRED DUFOUR
Yuan to Join Top 3 Global Currencies Club in 5-10 Years – CCTV Commentator
According to the latest figures from Japan's government, the nation's GDP shrunk by an annualised 1.2 per cent in 3Q18, exceeding the previous expectations of a 1.0-per cent contraction. This compared to a 0.7-per cent growth in the previous quarter and a similar 0.7-per cent expansion in the third quarter of 2017.

The government figures showed that the decline in Japanese GDP was caused by extreme weather conditions that weighed on consumer spending, investment, and manufacturing output.

Additionally, a slump in the Japanese exports deepened the plunge — suggesting the trade standoff between the US and Mainland China is starting to take its toll on other economies of Asia-Pacific and, specifically, the Far East region.

"The decline in exports cannot be attributed entirely to the natural disasters," Hiroaki Muto of Tokai Tokyo Research Center said. "The message is China's economy is weakening, which means Japan's exports will be slow to recover and growth will stall around the first half of next year."

© AP Photo / Vahid Salemi, File
Japanese Oil Importers to Consider Iranian Deliveries Amid US Sanctions Waiver
The Japanese government said exports fell 1.8 per cent quarter-on-quarter during the reporting period — the largest slump in roughly three years, exacerbated by the recent volatility in currency markets and the rising costs of fuels.

Meanwhile, Japan's domestic private investment, or capex of national enterprises, slid 0.2 per cent, compared to a 3.1-per cent increase in the previous quarter.

Economists say the Japanese economy will rebound in the final quarter of this year due to an expected pickup in manufacturing and exports, while the nation's solid labour market and rising wages are expected to support household spending.

However, in the medium-to-long-term perspective, the ongoing trade frictions between the US and China — involving several other nations, including Japan — are expected to weigh on the pace of economic expansion in the island nation.

"Trade war uncertainties have begun to increase, we see some slowdown in Asia and that is gradually hitting Japan," Kohei Iwahara of Natixis Japan Securities said.

The Japanese government said that a series of floods, an earthquake, and a typhoon during this past summer disrupted the demand for consumer goods and dampened the overall shopping sentiment. Japan's private consumption, which accounts for roughly 60 per cent of the nation's GDP growth, fell 0.1 per cent in Q3.

Meanwhile, on the foreign trade front, Japan suffered a drop in exports of automobile parts, consumer electronics, and industrial equipment. This decline comes at a time of rising uncertainty and a gradual realignment in global supply chains, which Japan is a crucial part of.

Economists say Japan might be in for an extended period of economic uncertainty due to its excessive reliance on international trade.

"Japan's economy may slow down from January onwards as the US-China trade war intensifies," Masaki Kuwahara of Nomura Securities said. "US tariffs on its imports of Chinese goods take effect in January, curbing Chinese shipments, which will in turn damage Japanese exports and capital expenditure."

© AFP 2019 / MANDEL NGAN
US, Japan Teams Up to Expand Global Markets for Natural Gas – State Department
However, these challenges could be offset by a series of trade deals between Japan and its key trading partners — including the US, China, and Australia, as well as the countries of South East Asia.

Some of such deals are already in the making — following this year's warm talks between Japan's Prime Minister Shinzo Abe and US President Donald Trump, on the one hand, and Abe and Chinese President Xi Jinping, on the other.

Some Japanese officials are expecting a possible further decline in national exports.

"IT-related exports to Asia have been slowing from around spring, so we need to be mindful of the impact trade frictions and China's growth outlook could be having on Japan's economy," Toshimitsu Motegi, Japan's Economy Minister, said.

However, there is rife speculation a robust increase in Japan's domestic investment and foreign direct investment (FDI), along with the nation's key role in trading relations in Asia-Pacific, could make up for the loss of revenues in the traditional exporting sectors.

The Japanese government has considered a massive $88-billion fiscal stimulus package to spur the nation's economy. However, officials are not expected to take action until the 4Q18 GDP figures come out, providing more clarity for the medium-term economic outlook.