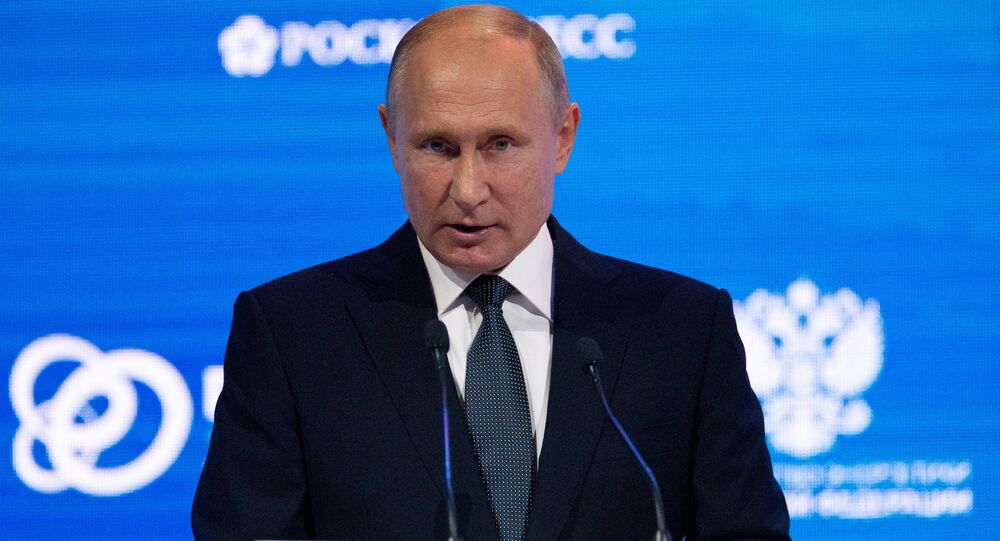 Russian President Vladimir Putin has commented on the recent developments around the Nord Stream 2 project: in particular, reports that Washington was mulling to introduce sanctions on companies participating in the project.

Russian President Vladimir Putin met with Austrian Chancellor Sebastian Kurz on Wednesday, to create Austrian-Russian energy cooperation. The Austrian top official noted that the cooperation between the countries had lasted for 50 years.

"We would not want the whole Europe to look like Bulgaria that demonstrated weakness and inability to protect its national interests," Putin said.

"I presume that we are all on the same page [in regard to the project], and we are all interested in this project, and we will fight for its implementation," Russian President said at a joint news conference with Austrian Chancellor Sebastian Kurz following talks in St. Petersburg.

Meanwhile, Austrian Chancellor said that EU countries should maintain dialogue with Russia and strive for improving relations with Moscow.

© AP Photo / Sergei Grits
Putin Says Austria Ready to Engage in Syria Humanitarian Action
"There has been good cooperation between Austria and Russia for 50 years. This cooperation is expanding and it provides the energy security not only for Austria, but also for Europe. We have 50 years of gas deliveries from Russia — we have celebrated the anniversary this year. If we look back to the history, these deliveries have always been stable, even in the most politically difficult times," Kurz said.

"Not only Austria but the entire EU wishes for a closer cooperation," he said at a press briefing in St. Petersburg. Kurz stressed that Austria – the host for the Organization for Security and Co-operation in Europe – would continue to keep peace on the continent.

"As a small but active EU member state we play a role in shaping the EU stance – and we bear responsibility for it," the chancellor added.

Earlier, Sebastian Kurz said ahead of his visit to St. Petersburg that it was almost impossible to ensure EU energy security without supplies.