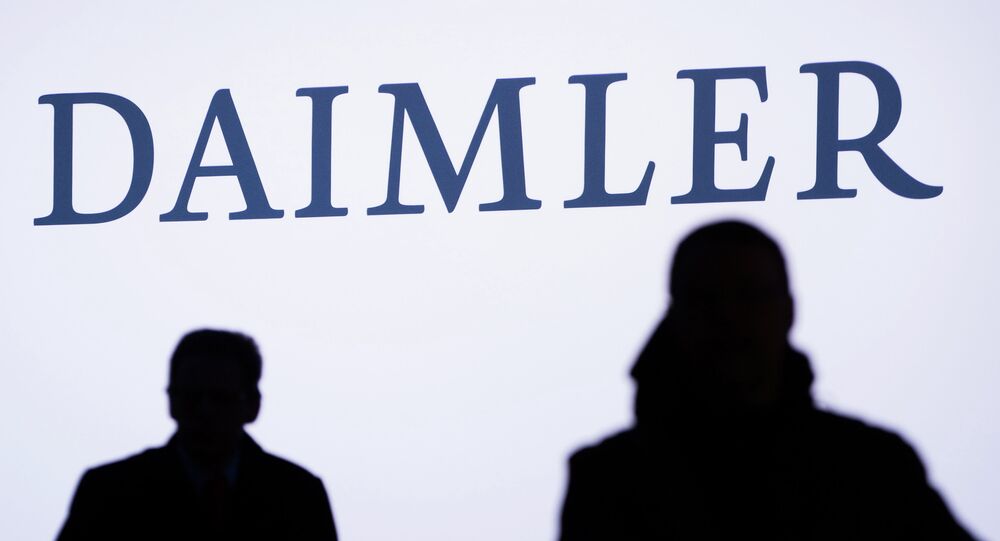 The announcement of the massive planned investment comes after the Chinese carmaker Geely disclosed it had acquired an almost 10-percent stake in Daimler, becoming its largest single stakeholder, and stirring some controversy.

The move also reflects the gradual re-orientation of the Chinese economy toward reliance on domestic demand rather than exports, in line with the central government’s ongoing economic reforms.

The two automakers – Daimler and BAIC – are set to co-invest the $1.9 bln necessary to open the new plant, BAIC said in a statement to the Hong Kong Stock Exchange Sunday. The location of the new production and assembly facility was not disclosed.

It is also unknown whether the new facility will only produce vehicles for the domestic Chinese market, or for the purposes of exporting them back into Europe and beyond as well.

© AP Photo / Laurent Cipriani
BMW Takes Apple, Google Competition 'Very Seriously', Daimler Not so Much
The two automakers’ joint venture is called Beijing Benz Automotive Co., and was established in accordance with Beijing’s foreign investment law, which mandates that foreign companies partner with local affiliates in order to do business in Mainland China.

The statement also suggested that the new facility will be equipped with a “high quality premium automobile manufacturing system to further improve the overall production capacity of Beijing Benz.”

This comes after the Chinese automaker Geely disclosed it has an almost 10-percent stake in Daimler. Geely’s billionaire founder Li Shufu said he’d purchased the stake in Daimler for almost $9 bln.

"Daimler knows and appreciates Li Shufu as an especially knowledgeable Chinese entrepreneur with a clear vision for the future, with whom one can constructively discuss the change in the industry," the German automaker said in a statement.

This is not the first Geely investment in a Western carmaker. Back in 2010, amidst the global economic crisis, Geely acquired the Swedish automotive company Volvo from Ford Motor in a $1.8-billion deal – compared to the $6.4 bln that Ford had paid to purchase Volvo in 1999.

Berlin said the deal does not violate either the foreign investment, or anti-monopoly rules, and could proceed.

“It is a company decision,” a spokesman for the Angela Merkel cabinet said. “Due to the character of the investment as a minority stake, there is no need to act.”

© REUTERS / Christian Mang
BMW, Audi, Daimler, Porsche Plant Workers Reportedly Begin Strike in Germany
Still, the revelation that Li has accumulated a 10-percent stake in Daimler – one of the world’s oldest carmakers – came about as a shocking surprise.
German newspaper Bild am Sonnntag said Li will soon arrive in Germany for ‘secret meetings’ with the German government Tuesday. The government declined to comment.

The $2-billion investment into China’s manufacturing facility by Daimler and BAIC has stirred some intellectual property concerns, as Daimler is known for making smart cars and electric vehicles. Mainland China has sought to ramp up its own production of these types of vehicles for years.

“No current car industry player is likely to win this battle against the invaders from outside without friends. To achieve and assert technological leadership, one has to adapt a new way of thinking in terms of sharing and combining strength. My investment in Daimler reflects this vision,” Geely’s Li said.

However, the tightening cooperation between Western automakers and Mainland China appears to be mutually-beneficial. China has become the world’s largest auto market, and the majority of international carmakers have a presence there – through a local partner.