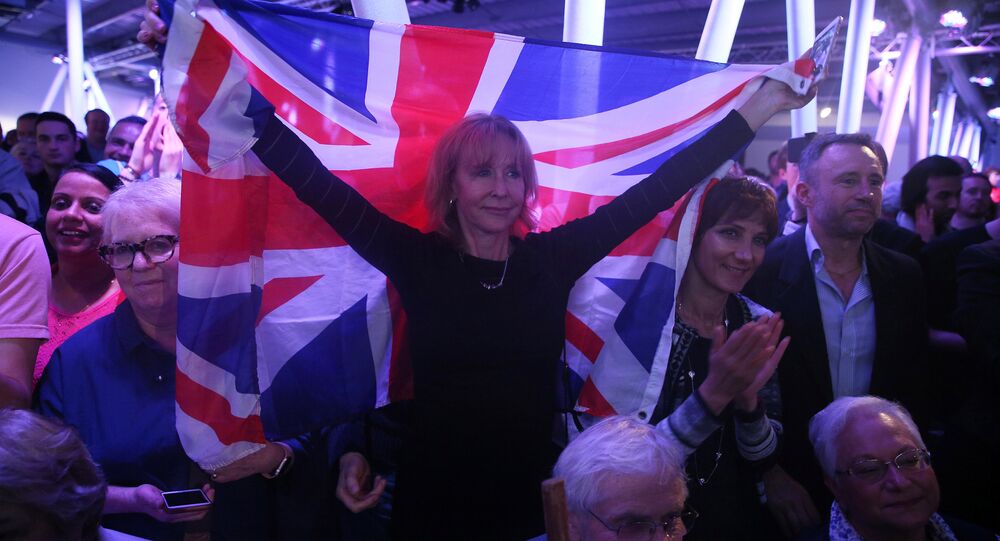 The British government says it has achieved internal agreement on the way forward in the tumultuous Brexit process, an attempt to reassure the business community amid the solid economic growth and elevated concerns over future trade relations with the EU.

Kristian Rouz — Three members of the Tory and Unionist Cabinet authored an open letter to British private sector enterprises, saying that the government is able to overcome its internal differences over the UK's post-Brexit relationship with the EU. Additionally, the Cabinet pointed to the UK's robust economic expansion last year, which took place amidst the heightened political tensions.

The UK's Chancellor of the Exchequer Philip Hammond, Business Secretary Greg Clark, and Brexit Secretary David Davis said in the open letter that the Cabinet is seeking a two-year transition period in trade relations with the EU after Brexit. The terms of bilateral trade would remain unchanged during this period, allowing businesses to gradually adjust to the changing economic reality.

This comes amidst concerns that the UK's separation from the EU, effective in spring 2019, could produce immediate trade barriers in the form of customs tariffs, border taxes, and regulatory crackdown on the exchange of goods and services across the English Channel.

"We believe our proposal is closely aligned with the guidelines adopted by EU leaders in December," the Cabinet members wrote in the letter. "Both we and the EU therefore want to agree the detail of the implementation period by the end of March, making good as swiftly as possible on our promise of certainty."

© AP Photo / Sang Tan
Economic Analysis Shows Brexit Impact on UK Finance Services to be Slight
During the proposed two-year transition period, the UK would also observe all the EU rules and regulations. This raised some eyebrows amongst the UK business and academic communities, as the proposal suggests a de-facto "delay" of Brexit by two years.

A London-based research project "The UK in a Changing Europe" says the Cabinet's focus on getting a Brexit deal with the EU might be a mistake. Its new report suggests the UK needn't maintain its close ties with the EU when it comes to financial services at least — as this industry is already heavily-globalised regardless of tariffs and non-tariff limitations, such as capital controls.

"The UK in a Changing Europe" report also says the non-financial sector of the economy might take a blow as a result of a "hard Brexit". For example, fisheries, chemicals, and car-makers could face a 36-percent decline in output if the UK severs its ties with the EU. The think tank suggests the Cabinet should focus on maintaining a mutually-beneficial exchange in goods across the Channel.

"While financial and manufacturing services are very important, the U.K. government's emphasis on securing special UK-EU agreements for City-based financial markets may be misplaced," Prof. Raquel Ortega-Argiles, of the University of Birmingham, says.

Additionally, British and EU officials are reportedly holding secret negotiations on extending the proposed transition period to three years, according to a recent report by the Daily Telegraph.

This comes as Brexit Britain demonstrated solid economic growth last year. According to the Office for National Statistics (ONS), the UK's GDP grew 0.5 percent quarter-on-quarter in 4Q17, whilst for the entire year of 2017, the economy expanded by 1.8 percent.

"The boost to the economy at the end of the year came from a range of services including recruitment agencies, letting agents and office management," Darren Morgan of the ONS said.

Albeit the pace of expansion for the year was the slowest since 2012, according to the ONS, the figures are above the previous expectations, considering the enormous amount of political volatility and the consequent deterioration of investment climate.

The ONS also pointed to improved labour productivity, currently at its highest in six years.

"Productivity remains a key challenge to unlocking a healthier economy," said Nancy Curtin, chief investment officer at Close Brothers Asset Management. "While a recent leap in productivity to its fastest rate in six years is encouraging, further investment from both the public and private sector is required".

The Cabinet, despite its attempts to reassure the business community, remains somewhat divided over Brexit amid the ongoing talks with the EU. Chancellor Hammond has called for "a middle way," arguing against both staying in the EU customs union, and a "hard Brexit".

The UK government says they are having internal "arguments about the tactics," according to Brexit Secretary Davis, but the Chancellor and Prime Minister Theresa May confirmed they reached a fundamental agreement on the path forward.