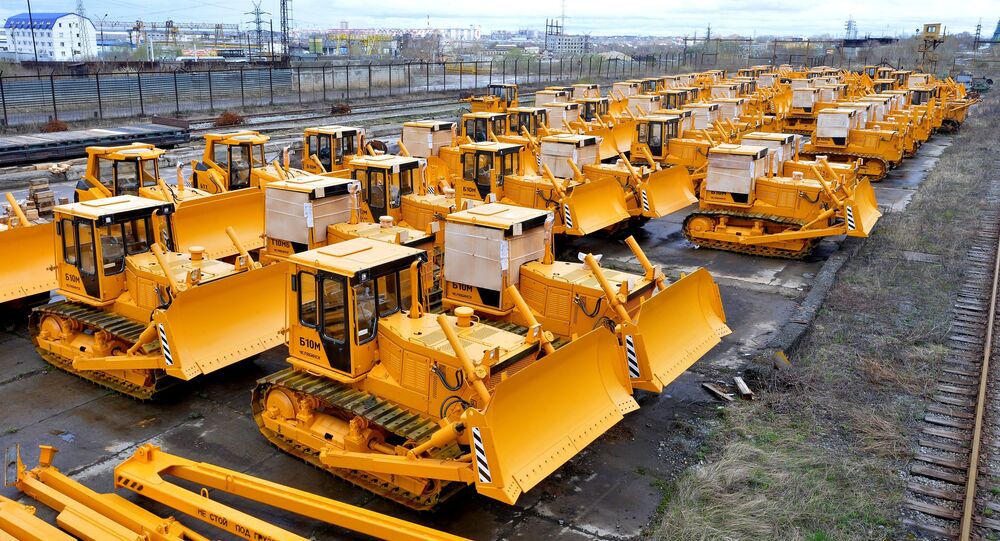 Despite the setbacks it suffered after the fall of the Soviet Union, one of Russia’s top heavy machinery manufacturer is now making moves to reclaim its standing on foreign markets.

The Chelyabinsk Tractor Plant, also known as ChTZ-Uraltrak, is one of the largest industrial vehicle manufacturers in Russia. During the Soviet period the plant exported its products, including bulldozers, tracked tractors, cranes and excavators to countries in Eastern Europe, Africa and Asia.

© Sputnik / Maxim Blinov
India, Russia Poised to Ink $1 Bln Deal in 2018 For Kamov-226T
After the fall of the Soviet Union the company suffered a number of setbacks in export sales as it lost much of its presence in foreign markets, but now it appears that this trend is about to be reversed.

In an exclusive interview with Sputnik, ChTZ-Uraltrak head of foreign sales Vladimir Klein said that the company is working towards regaining its standing abroad.

"During the last decade we supplied our products to India (about 50 B10M bulldozers), Mongolia, Sudan and Indonesia. We also supplied TR-20 tracked pipe-laying cranes to Portugal. And our latest breakthrough shipment was to Peru as we signed an agreement with our new dealer, “Vostok-Sur Export-Import” S.A. Despite the fact that the Peruvian market is almost completely dominated by Caterpillar we are making a big effort to advertise our plant and its products there. For example, lately we’ve managed to conducted a test-drive presentation for our PK-55 wheeled loader there, which resulted in a successful sale. And by the end of the year we expect to supply one more loader and a tracked bulldozer to the country," he said.

He added that exports to Europe are complicated by a number of issues, including the problems related to vehicles’ certification in accordance with European standards.

"Earlier, all the way before the 2000s, we supplied our vehicles, including DET heavy bulldozers, to Hungary, Romania and Bulgaria. Today we still have ‘live’ dealers in Hungary, Bulgaria and Poland who refuse to succumb to the advance of Germany’s Liebherr. We strive to maintain our presence on this market and to resolve issues related to the certification of our vehicles in accordance to the existing European technological and environmental standards," Klein explained.

He also said that the company has two official dealers in Vietnam who help the country satisfy its need for bulldozers.

"B10M is a simple and reliable vehicle that has probably the best price-quality ratio as compared to other machinery of its class. It is equipped with D-180 diesel engine of our making and manual transmission (whereas the majority of bulldozers of other global brands are fitted with more complex hydromechanical or hydrostatic transmissions)," Klein said.

He pointed out that the bulldozers are being shipped to Vietnam in a disassembled state (which is cheaper than shipping already assembled vehicles), where the dealers quickly assemble the vehicles and prep them for operation, while their significant technological expertise and abundance of spare parts allows for swift repairs if the machinery breaks down.