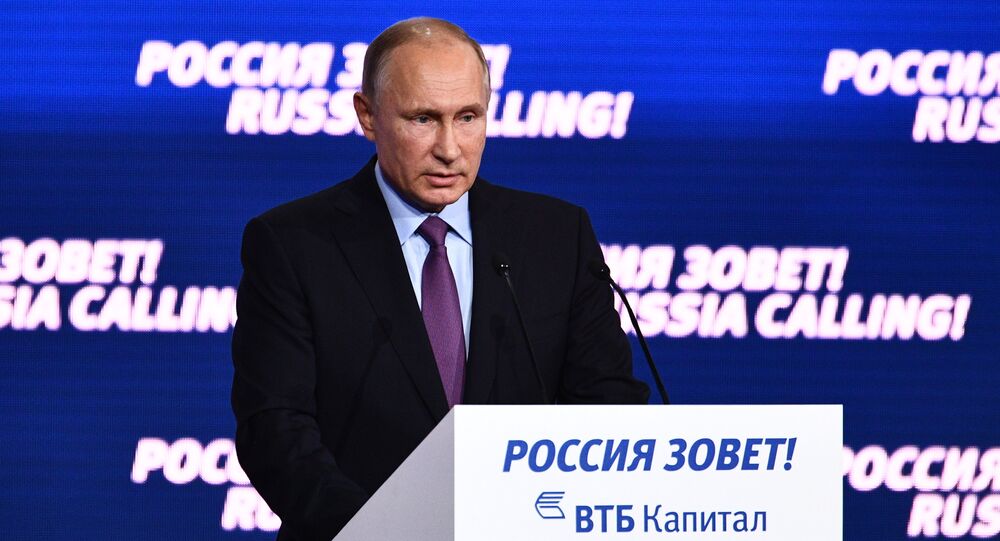 The Russian president has delivered a speech to the 9th annual "Russia Calling" investment forum in Moscow. The event, which begins today, seeks to facilitate cooperation among the members of the global business community.

The "Russia Calling" forum includes panel discussions as well as separate meetings between international investors and representatives of Russian businesses. The event is scheduled to come to an end on October 26.

According to President Vladimir Putin, Russia’s authorities expect that the non-oil and gas budget deficit to decrease to 5.9 percent of its GDP in 2019, as compared to the current level of 8.5 percent.

"The dependence of the federal budget from the oil market situation is confidently decreasing. If in 2014 the oil and gas revenues accounted for more than half of the budget revenues, 51.3 percent, then this year, already about 39 percent."

He further said that the Russian government expects the "the non-oil and gas budget deficit will decrease from 8.5 percent right now to 5.9 percent of the GDP as early as 2019, and the general deficit of the federal budget will be less than 1 percent."

Thus, in the following three years, oil and gas revenues are set to become only 1/3 of all income in the Russian budget, according to the president.

Commenting on the state of Russian economy, the Russian president noted the end of stagnation and said that Moscow is ready to boost cooperation on the international level.

However, Putin expressed dissatisfaction with the current rate of Russia's economic growth, saying that it should be greater than the world average index. As he explained, currently some structural limitations impede the solution of this problem.

In addition, Putin mentioned the improvement of the business climate in the country, stimulation of competitiveness and the creation of more comfortable conditions for investments as a part of Moscow's plans for improving the country's economy. He also named the digital economy and the launch of new business models as one of the main factors that will allow Russian companies to become more competitive and strengthen the economy as a whole.

"I am confident that the development of the digital economy, the launch of new business models will allow Russian companies to become more competitive and, in general, diversify the economy, give impetus to the development of industries and markets based on breakthrough technological solutions, and provide higher living standards for Russian citizens," Putin said.

The Russian president has expressed confidence in the Russian Central Bank's policies amid the existing threats.

"The inflow of capital and foreign trade recovery is strengthening the country’s balance of payments, the gold and currency reserves of Russia have grown 13 percent since the beginning of the year, the ruble exchange rate has stabilized."

According to him, the conservative budgetary and monetary policy of Russia has proven its value in recent years, but now it is time to move forward, given the problem factors of the Russian economy. "We see it perfectly, we know what to do about it."

He explained that it is necessary to strike a balance between maintaining stability and more actively supporting new factors in the economy.

Putin has announced that investment growth in Russia reached 4.2 percent within nine months of the current year, while inflation in the country has slowed to 2.7% in comparison to the previous year.

According to the president, the growth of industrial production in Russia during the three quarters of 2017 was 1.8%. Since the second quarter of this year, the rate of [GDP growth] has exceeded two percent.

The president noted the agricultural sector as the largest non-energy exporter of Russia. As he said, in January-August this year, foreign deliveries of food and agricultural raw materials increased by 19.6%, amounting to 11.9 billion dollars.

"Fall is in full swing, we still have a lot ahead," the Russian leader concluded.