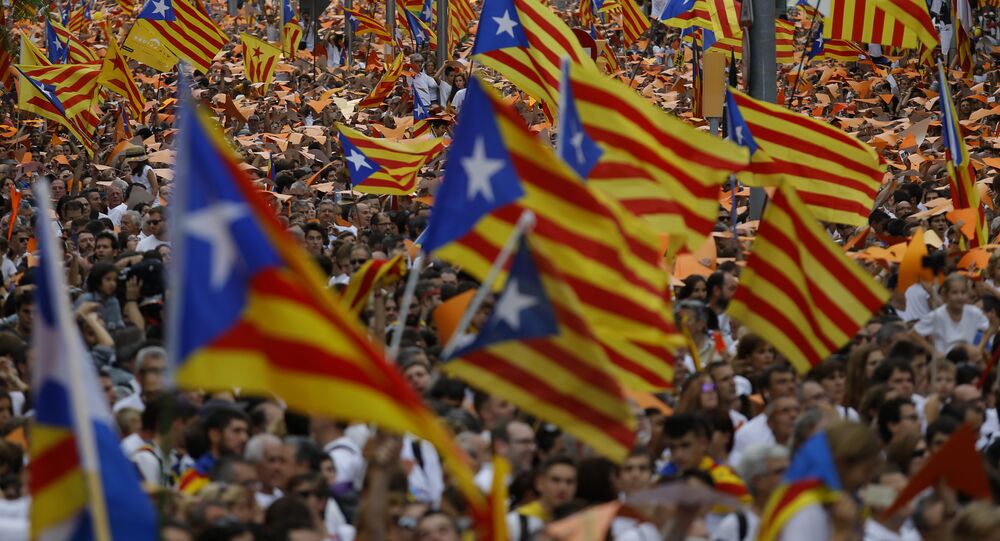 Adding to the economic concerns typical for Southern Europe, the standoff over Catalonia’s independence could spark lengthy turmoil in Spain’s banking sector; whilst the nation’s productive forces would take a hit as well due to the disruption of established economic ties.

International credit rating agency S&P Global says that regardless of the Spanish government’s ability to successfully establish its governance in Catalonia, Spain’s economic growth would falter due to  deteriorated investor sentiment and fears of an extended political turmoil.

© AFP 2021 / CESAR MANSO
Hundreds of Companies Leave Catalonia Amid Independence Bid - Reports
Spain has a BBB+ sovereign borrowing rating, and a “positive” outlook, as economic growth has recently accelerated in the once-troubled Southern European economy. Spain was one of the worst-affected nations in the 2011-2012 European debt crisis, as the lack of monetary policy flexibility by the European Central Bank’s (ECB) drove its governmental debt higher.

However, S&P says it will refrain from near-term rating upgrades for Spain in order to wait out the Catalonian crisis, and see how it impacts Spanish economic growth and Madrid’s budget structure.

Meanwhile, independence would affect the Catalonian economy as well, mainly due to the disruption of the aforementioned ties with Spain, as well as the region’s uncertain status within the Eurozone and/or the EU.

“I have been speaking recently to Catalan bankers and businessmen and they all say, ‘I know independence would be ruinous for my company, but if I say as much to the regional government, they’ll destroy me’,” former minister Eduardo Serra says.

Catalonia has a deadline of Thursday to declare its independence, while Madrid is weighing in on invoking Article 155 of its 1978 Constitution to restore its rule over the rebellious region. An extended standoff is unlikely beyond that point, and the crisis is expected to be resolved this week, however, in the worst case scenario, a Spanish governmental takeover of Catalonia would stir resentment in the region, which could affect its economic performance, and undermine Spain’s goals for economic growth.

© REUTERS / Ivan Alvarado
Invoking Article 155 Is 'Worst Attack' on Catalonia in Centuries
The Spanish economy expanded at a 3.1-percent pace in Q2, narrowing its budget deficit to 2.9 percent, which is below the European Commission’s target of 3.9 percent. The nation’s economic prospects were quite encouraging up until the Catalonian independence crisis hampered the government’s economic planning.

Ahead of the anticipated declaration of Catalonian independence, Spain’s financial sector is bracing for the worst economic consequences of the move. Whilst their strategies remain uncertain, their immediate reaction is also hard to predict.

“No decision has been taken,” CaixaBank spokesman said. “When independence is declared, if it becomes a reality, we will act to defend our customers, staff and shareholders.”

Also, after the independence referendum earlier this month (which Madrid doesn’t recognize as legitimate), many companies started leaving Catalonia, thus decreasing their exposure to the downsides of the crisis.
Since 6 October, up to 700 enterprises have moved their offices out of Catalonia.

“Most companies never imagined that international investors would become so twitchy,” an unnamed PR industry professional said as quoted by El Pais. “They never thought it would come to this. Never.”

Meanwhile, the S&P is closely monitoring the Catalonian crisis’ implications for Spain’s debt-to-GDP ratio, which is currently at 96 percent. The agency says the fiscal situation in Spain is still fragile despite robust economic expansion and the standoff with Barcelona could make it increasingly volatile.

Italy's Veneto, Lombardy to Seek Autonomy, Not Independence Like Catalonia