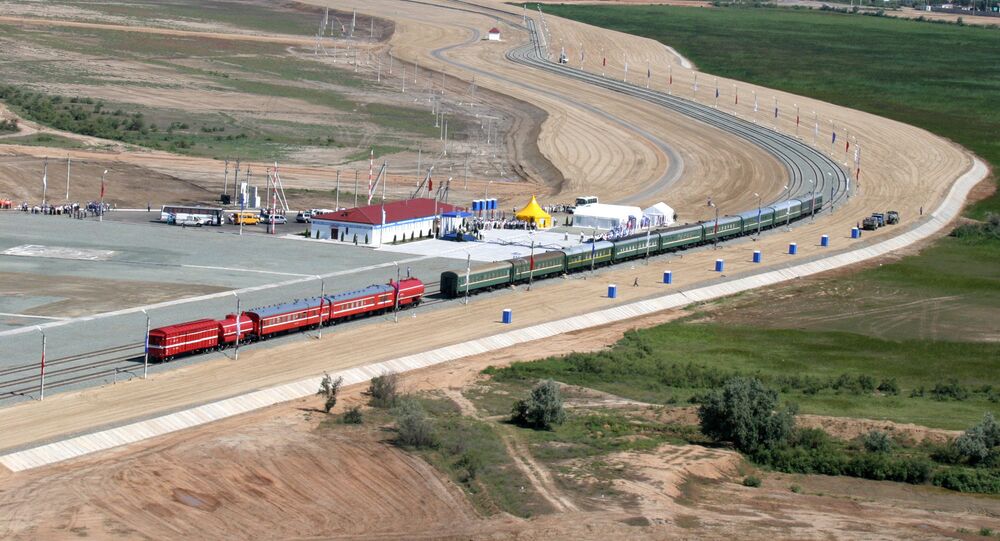 Russian and Iranian joint railroad projects benefit virtually all of Europe and Asia, according to the chief of the Iran Railways’ international affairs department.

Abbas Nazari, head of the Islamic Republic of Iran Railways’ foreign affairs department, told Sputnik Persian that the cooperation between Russia and Iran on an intercontinental railway project is "profitable not just for both countries, but also for Asian and European states."

"Russia is a prominent railway power; it has an extensive network of railways which accounts for 85 percent of all freight transported by the country. An important element of our cooperation is the North-South transport corridor which, as you know, begins in Europe and runs to India via Russia, Azerbaijan and Iran. We seek to ensure that Iranian railways become the primary transit element of the North-South Transport Corridor," he said, adding that the length of the Iranian segment of the corridor is about 2,000 kilometers.

Sergey Kuznecov
Iranian Ambassador to Moscow Suggests Russian-Iranian Media Association Creation
Nazari pointed out that Russia and Iran need each other to move their freight between Europe and Asia, and that Tehran enjoys an unprecedented level of technological cooperation with Moscow.

He also said that Iran also cooperates with Russia on several other important railway-related ventures, like the joint manufacturing of railroad carriages and the upcoming electrification of the 600-kilometer segment o of the Garmsar – Inche Burun railway, as well as on other large-scale infrastructure projects.

"We’re working together with Russia on developing the biggest docking area in Iran – the Shahid Rajaee port. The ongoing negotiations cover all aspects of this undertaking: the port itself, the access railways and the special economic zone. Once all these matters are settled, the developing process will begin in earnest," Nazari explained.

The International North–South Transport Corridor is a 7,200-kilometer interconnecting network of railways, roads and shipping lanes designed to facilitate the flow of freight between India, Iran, Russia, Azerbaijan, as well as European and Central Asian states.