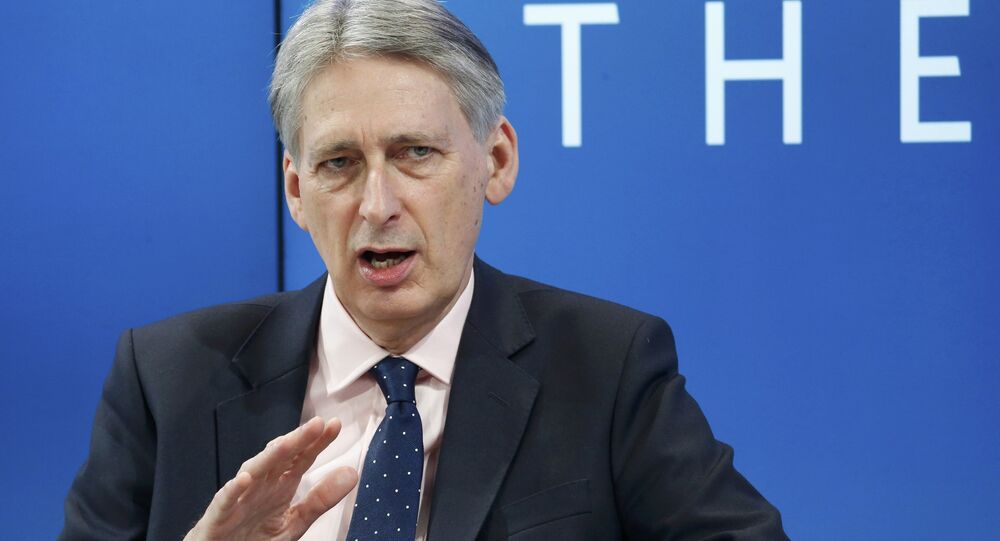 The UK's Finance Minister suggested that weaker economic growth prospects allow for the implementation of a limited fiscal stimulus package, while the central bank has observed solid macro fundamentals, but said it is too early to tighten monetary policies.

Kristian Rouz – Chancellor of the Exchequer Philip Hammond said the uncertainty and volatility, along with the political risks, which surround the Brexit process are starting to take a toll on the UK’s business investment. Businesses might abstain from allocating and reinvesting their capital in the near-term until the Brexit situation clears out, the Chancellor observed.

British businesses themselves, however, are not planning to scale back their investment, according to a recent Bank of England (BOE) survey.

"There would be a sigh of relief from business if we were able to get an early agreement on a transition arrangement," Hammond said in an interview on Thursday. "There is a large amount of business investment that is being postponed until business can see more clearly what the likely outcome of these discussions is. The earlier we can give business that reassurance, the more quickly we will get businesses investing again."

© REUTERS / Kirsty Wigglesworth/Pool
UK Prime Minister May Praises Spring Budget Drawn Up by Chancellor Hammond
The transition period that accompanies the UK-EU negotiations over the Brexit process is characterized by higher uncertainty, not least because of the ‘hung Parliament‘ resulting from the 8th June election in the UK. The Conservative Party had to ally itself with the Northern Irish Democratic Unionist Party (DUP), meaning the two political forces will have to compromise on many issues in order to work out a coherent Brexit strategy.

Typically, in times of higher volatility, investors close their exposure to risk, pulling out of the stock market and real economy in favor of safe haven assets, such as gold and government bonds (gilts).

However, the UK cabinet also suppose that Brexit is not the only reason why UK investment might decrease in the near-term. The policies of fiscal austerity, or lower budget spending allowing for the narrowing and elimination of the budget deficit, have produced widespread exhaustion among the British public. Austerity measures have remained intact since the European debt crisis of the early 2010s, and now a fiscal stimulus in the form of lower taxes and higher budget spending might be necessary to spur domestic consumption and investment.

"Seven years of hard slog," Hamond said on a separate occasion, referring to the austerity policies, have taken a toll on the Tories electoral result on the 8th of June, meaning that the government should consider rethinking their approach to fiscal policies. It is already unlikely that Britain will reach a non-deficit budget by year 2020 as planned earlier, so it might only be prudent to support economic expansion via higher spending.

The "case for growth," in Hammond’s words, would be higher budget spending that would allow for an expansion of the UK’s tax base. Rolling back the austerity would also encourage consumers, builders and investors.

The BOE, for their part, sees the situation differently. According to their recent survey, UK businesses are not planning to decrease their levels of investment in the foreseeable future regardless of the Brexit tumult, as macroeconomic fundamentals are strong, and the resurgence in British manufacturing, along with the narrowing foreign trade deficit, have opened many lucrative investment opportunities.

"In the coming months, I would like to see the extent to which weaker consumption growth is offset by other components of demand, whether wages begin to firm, and more generally, how the economy reacts to the prospect of tighter financial conditions and the reality of Brexit negotiations,” Marc Carney, the BOE Governor, said.

© AFP 2021 / Ben Stansall
'Brexit Not a Bed of Roses, But Not the End of the World' - Former BoE Governor
The BOE even said that UK businesses remain confident enough to increase their capital expenditures as they are eyeing better returns down the line.

700 businesses that participated in the survey said that indeed the car market has slowed, retail sales are weakening, and the real estate market is wobbly, but many companies are investing in new technology, particularly automation. This would allow the businesses to cut their costs in the medium-term.

UK manufacturers are cheerful due to the weaker pound, which has created better opportunities to boost their exports and also increase their share of the domestic market, the BOE data suggest. While the labour market remains solid, and unemployment is low, a pickup in salaries and wages has begun, fuelling hopes that consumer sentiment will improve soon.

“Before long, we will all begin to find out the extent to which Brexit is a gentle stroll along a smooth path to a land of cake and consumption,” the BOE’s Carney said.

This division in opinions between Hammond, who represents the cabinet, and Carney, the central banker, reflects the lack of coordination between the fiscal and monetary policies in the UK. While the BOE is expecting the macro fundamentals to show signs of improvement before hiking rates, the Exchequer is weighing enacting a comprehensive fiscal stimulus package. However, the latter is not possible without the BOE removing some of their accommodation first.