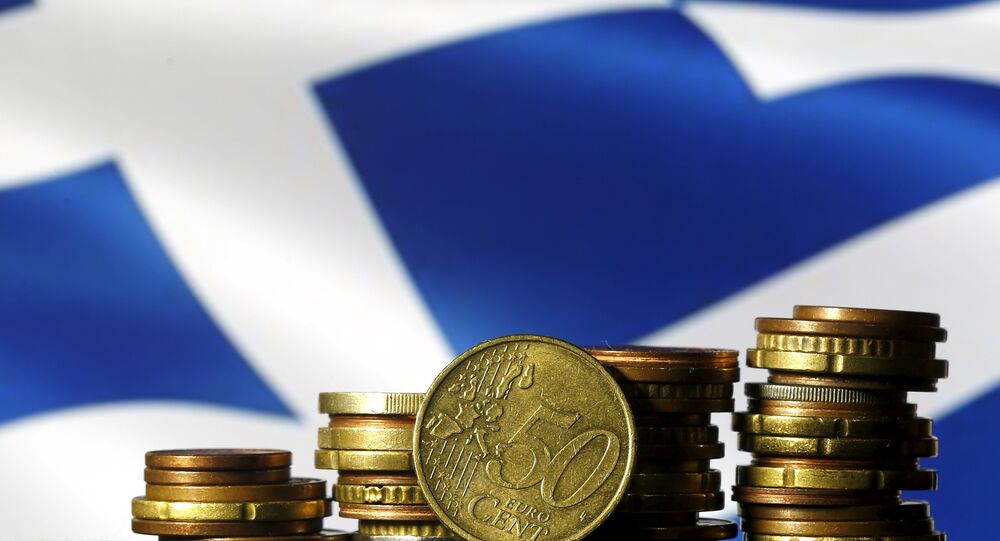 Even though the Eurozone's economic prospects have significantly improved because of the firm acceleration in German manufacturing and exports, the lingering Greek debt problem is affecting the euro area's investment appeal and holding back economic expansion throughout the bloc.

Kristian Rouz — Despite ongoing acceleration in the manufacturing-driven German economy and the stabilization of Eurozone inflation, the European Central Bank (ECB) is still poised to protract on normalizing monetary conditions within the single currency bloc. The most acute political challenges to the future of the euro area, in the form of a hypothetical Frexit and Itexit, have eased, but Greek debt problems and the possible, albeit distant, threat of a default, has not disappeared, even though it has been almost two years since the Greek crisis was in its active stage.

A debt relief package for Greece is still necessary, the International Monetary Fund (IMF) said, and Eurozone officials, primarily in the ECB, have yet to develop a common platform for tackling this long-lasting issue. IMF chief Christine Lagarde observed on Friday that the euro area's intentions withregard to the Greek debt problem are still unclear.

"We will carry on working on this debt relief package. There is not enough clarity yet. Our European partners need to be more specific in terms of debt relief, which is an imperative," Lagarde said.

© Photo : Pixabay
Bad Car-ma: Automobile NPLs Hit 8-Year High, Drawing Parallels With 2007 Mortgage Meltdown
This uncertainty is affecting the Eurozone economy, which has gained momentum since the start of the year, driven by a buoyant expansion in Germany. Both ECB head Mario Draghi and the European Commission are now more optimistic in their assessments of the economic future of the Eurozone, as levels of private sector investment have finally started to pick up after years of monetary stimulus and the stubbornly sluggish growth which characterized the early 2010s European debt crisis.

Greece has remained an issue, however, and Athens' inability or lack of will and effort to improve the situation is a downside risk to the Eurozone's overall investment appeal.

Nonetheless, the German economy, which grew 0.6 percent in 1Q17 compared to 0.4 percent in the last quarter of the past year, posted an increase not only in investment, but also in consumer demand and in exports.

"Confidence in the stability of the recovery is enormous," Jens Kramer of Hanover-based NordLB said. "Economic momentum is extremely robust and very broadly based. The steady increase in employment is fertile soil for domestic demand, and trade is providing impulses as well."

© REUTERS / Kim Kyung-Hoon
China-India Ties Are Crucial Amid New Global Order - IMF Deputy Managing Director
The upbeat macroeconomic figures in Germany might render the ECB more inclined to approve a debt relief package for Greece; however, the nations of the European North tend to believe in austerity as the main medicine for debt problems. The left-leaning Greek government is extremely reluctant to enforce stricter — and, naturally, unpopular — austerity measures in a nation plagued by unemployment.

Wolfgang Schaeuble, Finance Minister of Germany, hinted that the debt relief program conditions might be eased for Greece, possibly due to the recent economic improvement all across the Eurozone, but a solution would require a lot of negotiations.

"We are prepared to stick to what we have agreed in May 2016. That is the basis on which we are working… I am still in favor of getting a solution, at least a political solution, in the Euro group on the 22nd of May," Schaeuble said.

© AFP 2021 / LOUISA GOULIAMAKI
Greece, Foreign Lenders Reach Deal on Bailout Reforms
Amid improving global economic growth, euro area exports, and German exports, in particular, are meeting greater international demand and are poised to increase, while new gains in salaries and wages and improvements in consumer spending provide a solid basis for domestically-driven expansion in the Eurozone economy. Subsequently, a political solution to the Greek debt crisis might be easier to coordinate for the euro-area authorities.

Last month, Schaeuble welcomed the positive developments in Greek economic reform, which is seen as helping reduce the budget deficit and improve state finances in the heavily-indebted nation. The overall positive sentiment might be an indication that the Greek debt issue is not critical at this point, however, the negotiations over the further debt relief measures  are poised to be tough — like other nations of Southern Europe, Greece would benefit from higher inflation and a weaker national currency, which is not possible for a Eurozone member state.

"If the Greek government keeps to all the agreements, the Eurozone finance ministers could conclude the review on 22 May and soon after that release the next tranche," Schaeuble said. "The longer it takes, the more it unsettles the markets and businesses."

One of the main conditions that Germany insists on is tax reform in Greece, which would allow for increased budget revenues starting in 2020.

Currently, Greece needs another bailout tranche to avoid a default on its obligations. The next debt payment of 7.5 bln euros is due in July, while the overall Greek governmental debt stands at 330 bln euros and is, as the IMF puts it, "unsustainable".

Greek Citizens to Mark May Day With Mass Protests