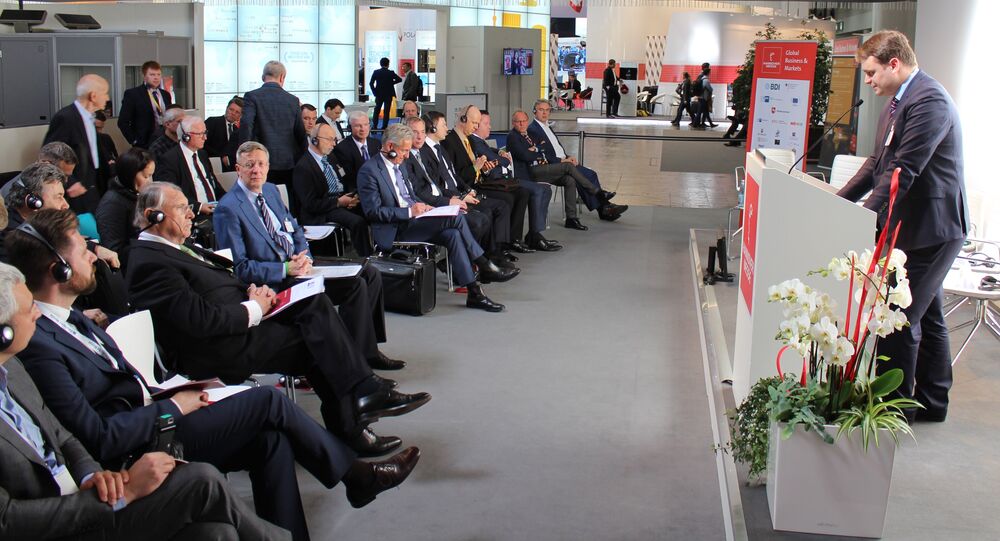 Experts and representatives of the industrial sector are discussing the prospects of digital cooperation between Russia and Germany at the Hannover Messe industrial expo.

On April 26, on the sidelines on the leading industrial show Hannover Messe the panel "Russia — Germany: Digital Economy and Industrie 4.0. Opportunities for Business" was held. The event was attended by Vasily Osmakov, the Deputy Minister of Industry and Trade of the Russian Federation, Michael Harms, executive director of the Germany's Easter Economic Commission, and heads of Russian and German companies, including Wilo, SAP, Tibbo Systems, 4.0-Veit and PAO Severstal. The panel session was organized by Germany's Easter Economic Commission, Mangold Consulting, SAP and the Roskognress Fund with the support of PAO Severstal and Deutsche Messe.

The session was opened by Michael Harms, who noted the need for dialogue between Russia and Germany.

"Now we can see a notable revival of the Russian-German trade relations, as well as the growing interest of German investors in the Russian market. The development of digital technologies will certainly help to strengthen this positive trend," Harms said adding that Hannover Messe proved enormous opportunities for cooperation.

"The participation of the Russian delegation at the world's largest industrial exhibition Hannover Messe has made it possible to expand international cooperation ties which will help Russian products to enter foreign markets," Vasily Osmakov, the Deputy Minister of Industry and Trade of the Russian Federation, said.

"Germany is the one of the key international partners in the industrial sphere for us. We are in constant dialogue with the representatives of German business. We are building together the most transparent rules of the game for foreign investors interested in attracting investments in the high-tech productions," he added.

© Sputnik / Sergey Guneev
From Lisbon to Vladivostok: German Experts View a Possible Free Trade Deal With Russia as Highly Profitable
Prospects for industrial digital transformations in Germany and Russia and ways to expand business opportunities in the digital economy were the main issues discussed at the panel.

One of the main objectives of the discussion was the identification of the actual and potential market of the digital economy in Russia and Germany in order to develop new business models that take into account the current limitations.

Commenting on the results of the event in Hannover Anton Kobyakov, adviser to the president of the Russian Federation, said that representatives of the German business community show lots of interest in cooperation with Russia, trade development and expansion between the two countries.

"I think that a plenary session of the St. Petersburg International Economic Forum at Hannover Messe and participation of our colleagues from Germany in the 2017 SPIEF on June 1-3 will promote the development of the bilateral cooperation [between Russia and Germany]. Today, our countries have a great potential for deeper cooperation in various fields," he stressed.

US President Arrives in Germany Ahead of Hannover Messe Opening (WATCH)