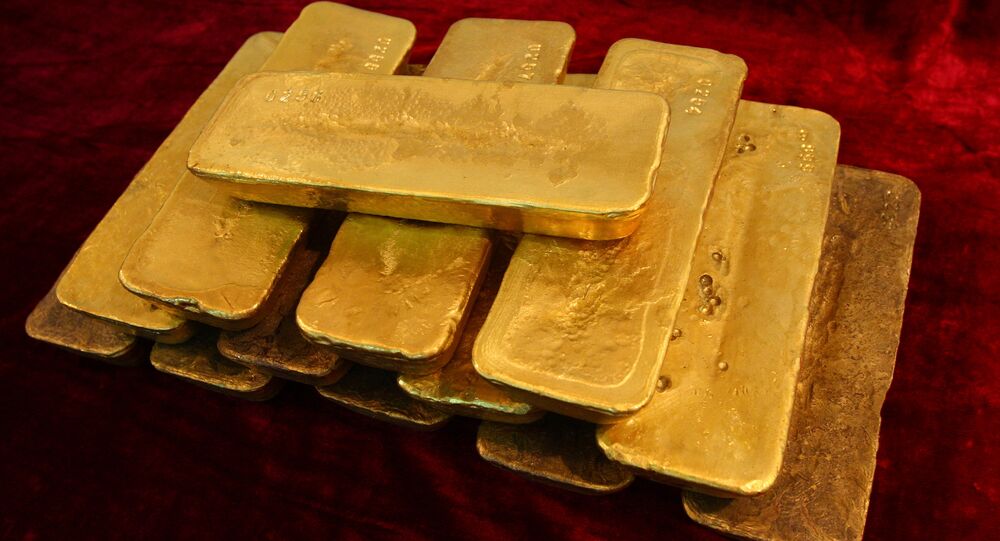 Chemists from Russia working with their Chinese colleagues have come up with a new method for producing gold from ore, reducing extraction costs by upwards of 30-40%, and dramatically decreasing the amount of time needed to do so, the press service of the National University of Science and Technology MISIS (NUST MISIS) has reported.

"The possibility to introduce our technology into gold production will be affected by [world market] prices for an ounce of gold," NUST MISIS Professor Vadim Tarasov explained, commenting on the new production method.

© Sputnik / Valery Titievsky
Gold Bugs: Why Russia's Central Bank is Stacking Bullion Bricks Like There's No Tomorrow
"Of course, there are even more efficient technologies available which would extract all the gold from ore, but they cost colossal amounts of money, so their introduction into production remains impractical even today," he added.

"With our technology, we get 85-90%" of the gold out, "which is a standard and most viable figure," Tarasov said.

Contrary to centuries-old stereotypes about how gold is actually produced, today most of the precious metal is extracted from the ground not in the form of nuggets or gold dust, but through the chemical processing of copper and other ores which contain it.

© Sputnik / Igor Ageyenko
Gold-bearing open pit in Russia's Amur Region.
© AP Photo / Chris Helgren
Thieves in Berlin Used Old-School Tech to Steal Huge Gold Coin
Gold is extracted from these ores with the help of water and cyanide compounds, which bind to the precious metal. NUST MISIS' press statement explained that while this process allows for almost all the gold from a lump of ore to be extracted, it is, in its traditional form, very time-consuming and expensive – taking at least 100-120 hours, with an ounce of gold (30 grams) costing the equivalent of about $800 dollars to produce.

At the moment, the price for an ounce of gold is hovering at around $1,250 US.

But scientists from the University, together with their Chinese colleagues, have come up with a new method for chemical extraction, which reduces extraction costs by 30-40%. The method adds ammonia to the cyanide compound. The technology is between four and eight times faster than the standard chemical method, and is far less exposed by unwanted impurities such as copper. This will allow miners to spend much less time, effort and resources to separate gold from copper.

© Sputnik / Alexander Liskin
New Gold Rush in California? Extreme Rains Turn Up More Metal
According to NUST MISIS, the new method has already been successfully tested at a gold mine in Tajikistan, where gold-bearing ore is mixed with a significant amount of copper. Scientists say the method of separating copper from the gold is working well, something which had proven unfeasible using Western methods. It also reduced by extraction time by an impressive 500%.

The University says the new method can be used at all gold mines in Russia.

Furthermore, according to Vadim Tarasov, the same technology can be used to extract gold from old electronics.

*Au is the symbol for gold in the periodic table of elements.