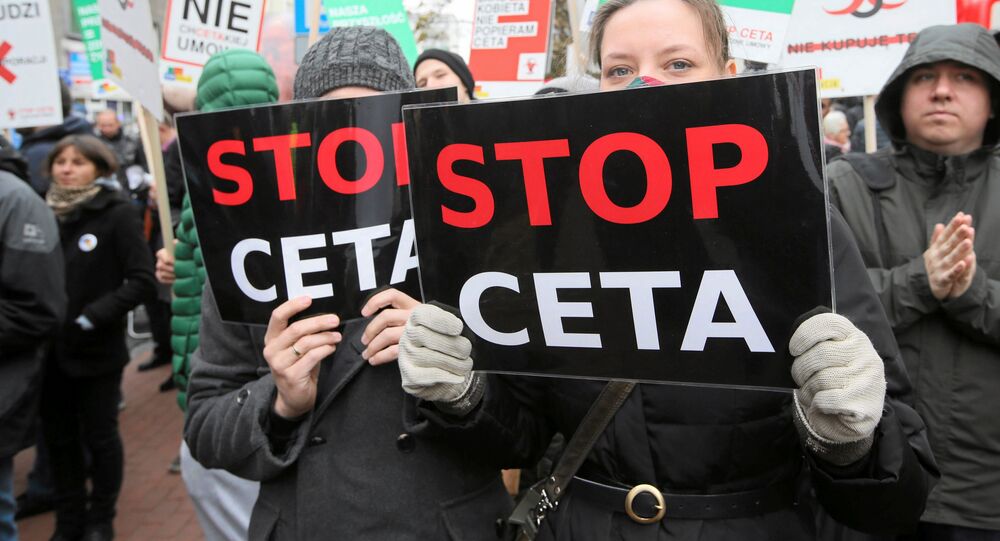 CETA will have a negative impact on the European farming industry. In addition, the agreement will open the European market to GMO-containing products from Canada and, possibly, from the US, thus creating risks for the health of European consumers, Polish lawmaker Miroslaw Maliszewski told Sputnik.

On October 30, the European Union and Canada signed the Comprehensive Economic and Trade Agreement (CETA). The deal is aimed at establishing a free trade zone between Canada and the EU.

© REUTERS / Francois Lenoir
'Trojan Horse': CETA Designed to Pave the Way for TTIP Implementation
A political agreement on CETA was reached in 2013. According to estimates by the European Commission, a free trade zone between the EU and Canada will remove nearly 99 percent of customs fees. The deal also includes increased quotas for European dairy products and Canadian meat.

The EU-Canada free trade deal has been criticized by European politicians, businessmen and public activists. Opponents fear it would undermine standards and regulations on environmental protection, health, safety and workers' rights.

In an interview with Sputnik Polska, Polish lawmaker and head of the Association of Polish Fruit Growers Miroslaw Maliszewski commented on the possible consequences of the deal for the economy of Poland and the entire European Union.

"We, farmers and agricultural producers, believe that the agreement is disadvantageous since it would create unequal terms for the European farming industry, small agricultural firms and the agricultural industry in Canada and, possibly in the future, in the United States. There is the North American Free Trade Agreement (NAFTA) facilitating trade between the US and Canada," Maliszewski said.

© AFP 2021 / Don MACKINNON
Canada's CETA Opponents to Insist on Investment Court System Removal - Green Party
He pointed out that Canadian agricultural products will be cheaper than those made in Europe. Canadian products will be exported to Europe, while European farming products will not be able to enter the Canadian market.

"Free access for Canada to the European market will be very dangerous for Europe’s agricultural producers," he added.

Furthermore, Maliszewski stressed that the deal will be beneficial for major European companies, but it will not be good for the farming industry and small agricultural businesses.

"I think time will tell that the European farming market, including Poland, will sustain losses because of this agreement. In particular, there will be a negative impact on prices of European agricultural products," he said.

Before it comes into force, the free trade deal between the EU and Canada must be ratified by the parliaments of all 28 EU members as well as by the European Parliament. Maliszewski suggested that finally the deal will be ratified but there is still the need for discussion of the possible risks of the agreement.

© REUTERS / Eric Vidal
EU and Canada Sign Controversial CETA Free Trade Deal
"Our party, the Polish People’s Party (PSL), stresses that the majority of CETA provisions still should be discussed. Only EU officials were involved in the negotiations. Now, the deal should be discussed on the national level. I think that finally CETA will be ratified, but with an effort. This discussion should be focused on the possible risks of the deal," Maliszewski said.

He also said that new protests against CETA cannot be ruled out since the agreement is "dangerous for farmers, the economy and consumers."

"The deal will pave the way for GMO-containing products to the European market. But it also will allow agricultural products made with the use of industrial technologies. Now, we’re concerned about the health and safety of consumers," Maliszewski concluded.

"I am concerned about the impact CETA could have on Europe because it would multiply by a factor of ten the number of potential claims by companies that would sue European governments. This is a really serious matter and the consequences are enormous for the population. That’s why the population must be consulted," he said in an interview with Radio Sputnik.

© AP Photo / Francois Mori
CETA Trade Deal 'Interfering With Democratic Institutions in EU and Canada'
Dr. Gus Van Harten, an investment law professor at Canada's York University, underscored that such deals as CETA prioritize the rights of major corporations. In particular, this is why the details of the negotiations were never made public.

"From the point of view of institutional analysis, you can see how the public is not given a full opportunity to really scrutinize these deals. The disparity between these powerful protections of foreign investor rights, without any corresponding responsibilities for foreign investors if they don’t respect local standards, on the environment or health or really anything – it's just an incredible gap that these deals endorse," he told Sputnik.