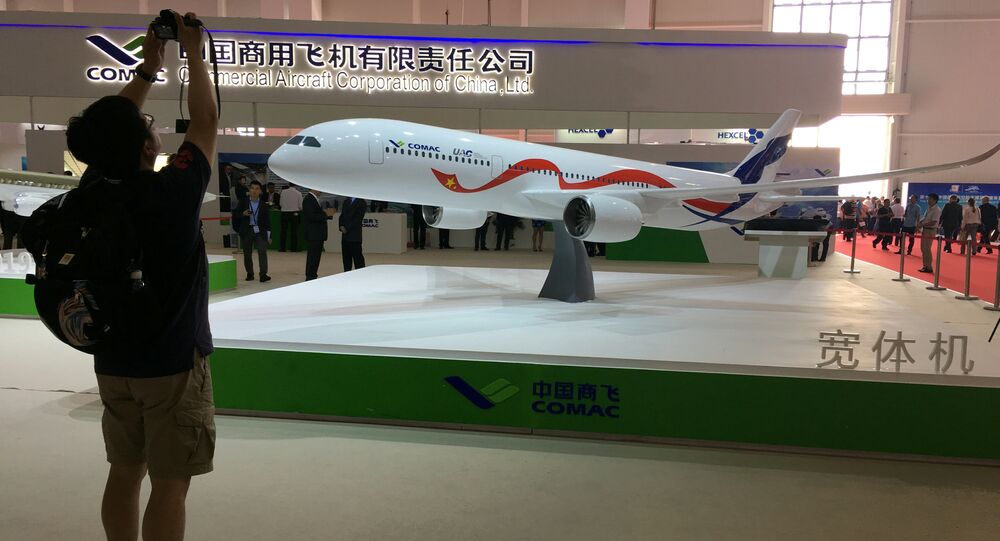 New Russian-Chinese Jumbo Jet Will Take on the Big Boys from Boeing, Airbus

Russian and Chinese aircraft builders have offered a much-anticipated glimpse of their joint project – a wide-body passenger jumbo jet, designed from scratch, and expected to take to the skies next decade. Russia's UAC and China's Comac hope to give global commercial aviation leaders Boeing and Airbus a run for their money with their new design.

Company representatives complemented the unveiling of the mockup by announcing that they have begun a search for suppliers. Officials did not specify funding details or technical characteristics of the joint project, but were able to confirm that the assembly of the new plane will take place in Shanghai. The unveiling was attended by Comac chairman Jin Zhuanglong, OAK director Yuri Slyusar and Russian Trade and Industry Minister Denis Manturov.

​The new, as yet unnamed jetliner is expected to start flight testing in 2021, and to enter commercial production by 2025. The project was announced in 2014 during President Vladimir Putin's visit to China as part of a $13 billion deal on aviation cooperation, but few new details have been made available about its development since.

The wide-body aircraft is certainly an ambitious project, given that it hopes to compete with Airbus and Boeing's commercial sales leaders, the A330, the A350, the Boeing 777, and the Boeing 787.

According to Comac wide-body department manager Guo Bohzi, the joint venture in Shanghai, whose shares are divided equally between the two parties, will start its work this year. "A wide-body jet is an extremely complicated product, which will require a lot of modern technology, experience and skills," Guo said, speaking to reporters at the airshow. "China and Russia each have their own advantages," he added.

© REUTERS / China Daily
A model of a widebody jet, which is planned to be developed by Commercial Aircraft Corporation of China (COMAC) and Russia's United Aircraft Corporation (UAC) is presented at an air show, the China International Aviation and Aerospace Exhibition, in Zhuhai, Guangdong Province, China, November 2, 2016

Up to three variants of the plane may be built. The aircraft will have two aisles, space for between 250-280 passengers, and a range of up to 12,000 km, making it perfect for long-haul flights.

Russian-Chinese Wide-Body Passenger Plane to Be Assembled in Shanghai