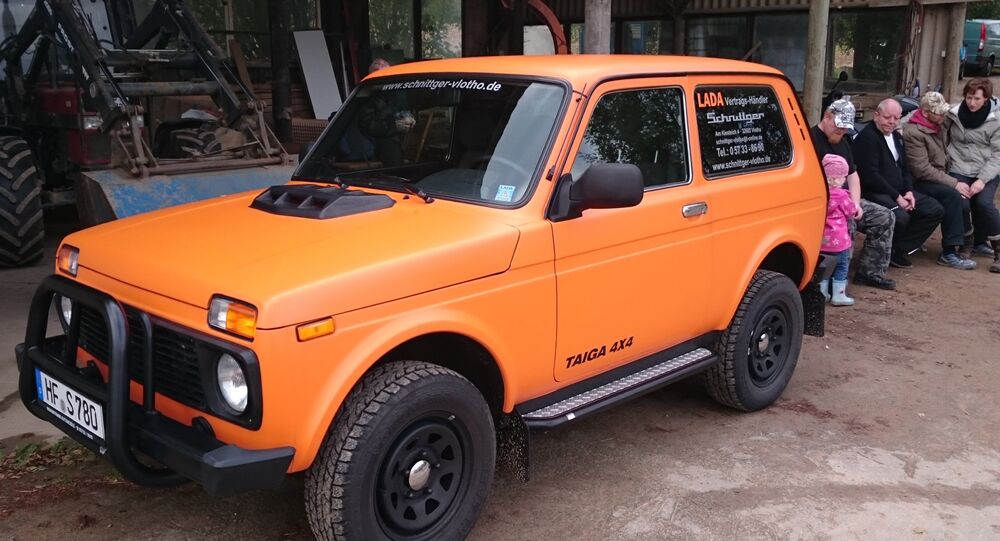 Despite fairly moderate sales figures, due to its reliability and practicality the Lada 4x4 SUV (previously known as the Lada Niva) is becoming an increasingly popular choice for German motorists.

© Photo : Sergio Antonelli
A Dream Car: Russian Niva SUV the Pride and Joy of Motorists Worldwide (PHOTO)
In the first nine months of 2016, the sale of Lada-brand automobiles in Germany increased by 41% compared to this time last year; and while the absolute figures remain low (just over 1,200 cars), it indicates a trend observed in many countries worldwide of a growing demand for Russian vehicles.

Bernd Hark, marketing manager for Lada Germany, told Sputnik that the increase in sales is directly related to the Lada’s new range of autos, and pointed out that Russian vehicles possess certain qualities that make them quite attractive to the local clientele.

"Robust simplicity – this is what our autos symbolize. Our customers are pragmatic people, they don’t need some overloaded configuration at an exaggerated price," he said.

Kay Wisgalle, 44, is one such customer. Six years ago he was looking for an inexpensive SUV to be able to drive to work during winter. During his search he came across a used Lada Niva and quickly realized that it was exactly what he was looking for.

"Driving it is a pure pleasure… This is what driving is really about, like it was back in the day. This car is not a mobile computer which reminds me that I need a rest by a blinking a coffee cup icon," Wisgalle said.

It should be noted though that the Lada 4x4 is a true gas guzzler, though Wisgalle remarked that by driving slowly the car spends only 8.5 liters of fuel per 100 kilometers which is "acceptable," though the vehicle’s carbon dioxide emission levels certainly leave something to be desired.

But it is its off-road capability where the Lada 4x4 truly shines. Due to its light weight, the vehicle can easily traverse areas where other SUVs fear to tread.

"Few vehicles can compete with the Niva off road," Wisgalle said.

These qualities are well known to motorists throughout Germany, and there’s even a dedicated community of some 500-600 Niva owners to which Wisgalle belongs.

"I organize meetings for members from North Rhine-Westphalia, which we hold four times a year. We meet and discuss various things –cars first and foremost, of course… This year we took 70 cars for an off-road ride. It was great," he reminisced.

He also mentioned that many of the club members like to customize their vehicles so no two Lada SUVs look alike.

"Once we were driving along the A2 route – 4 or 5 cars in total – and overtook several vehicles from Ukraine. And all of those drivers gave us a thumbs up. They were really happy that five crazy Germans driving Nivas overtook them. It was very funny," Wisgalle added.

And according to Bernd Hark, the number of Lada fans in Germany will continue to increase, and not just because of the 4x4.

"In 2017 we will attempt to sell more cars than SUVs," the manager declared.

And while it does seem like a lofty goal, as the share of SUV sales comprises about 70 percent of the total amount of sales, it appears that Lada Germany is up for the challenge.