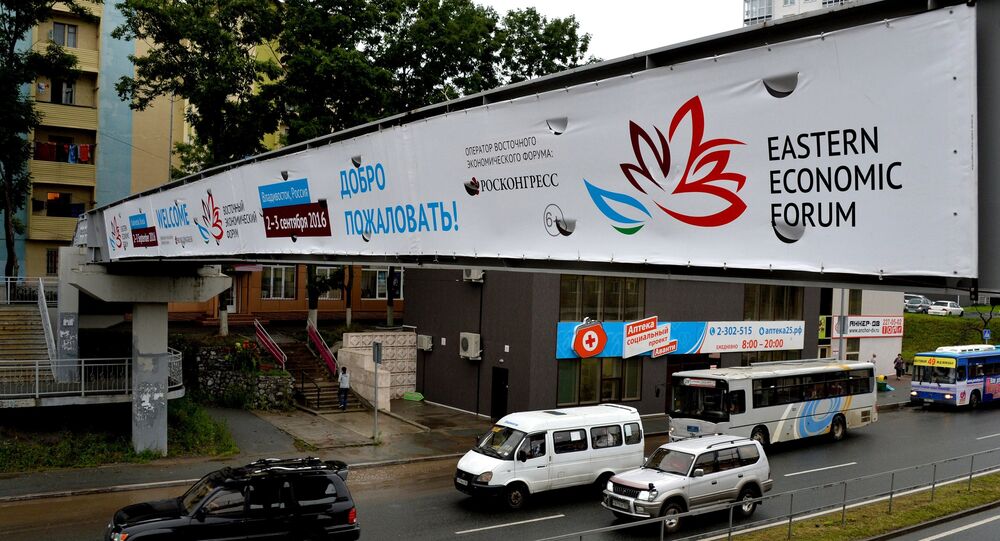 The Eastern Economic Forum (EEF), an investment platform aimed at the development of Russia's Far East region, is set to be held on September 2-3 on Russky Island off the eastern city of Vladivostok.

MOSCOW (Sputnik) — The EEF was established in May 19, 2015, after Russian President Vladimir Putin instructed that the event be held annually.

The forum has three stated objectives.

The first being to strengthen ties between the international investment community, Russian businesses, as well as federal, regional and local authorities.

© Sputnik / Ramil Sitdikov
Putin: Stopping Outflow of Population From Russia’s Far East is Key Challenge
The forum also aims to provide a comprehensive expert assessment of the Russian Far East’s economic potential and to enhance the competitiveness and investment appeal of the region in Russia and internationally.

The forum’s other main objective is to present new investment and business conditions, such as priority development areas, the Vladivostok Free Port, and government support for promising investment projects to the market.

The EEF Organizing Committee is chaired by Deputy Prime Minister Yury Trutnev, who is plenipotentiary presidential representative in the Far Eastern Federal District.

The First Eastern Economic Forum was held in Vladivostok on September 3-5, 2015. President Vladimir Putin delivered an address at the forum, which was attended by 1,800 delegates and guests, including 32 official foreign delegations.

© Sputnik / Vitaliy Ankov
Swanky Hotels, Rich Cuisine Await Visitors of Eastern Economic Forum 2016
More than 80 contracts worth 1.3 trillion rubles ($20 million) were signed during the forum. The largest of them included an agreement between Gazprom and the Ministry for the Development of the Russian Far East to build the Amur Gas Processing Plant, an agreement between RusHydro and VTB Bank to refinance the debts of the RusHydro subsidiary RAO Energy System of the East, as well as a deal on cooperation in electricity generation between Rosatom and the government of the Chukotka Autonomous Area.

The Second Eastern Economic Forum will be held on the campus of the Far Eastern Federal University on Russky Island on September 2-3, 2016. It will be attended by delegations from China, Japan, South Korea, India, Vietnam, Australia, the United States and Singapore, among other countries.

Participants in the forum will discuss investment opportunities, methods and instruments of business support, and infrastructure and energy projects.

Over 130 investment agreements worth over 1 trillion rubles are expected to be signed during the second EEF.

The main event on the EEF agenda will be a panel session attended by the Russian president, Japanese Prime Minister Shinzo Abe and their Korean counterpart Park Geun-hye.