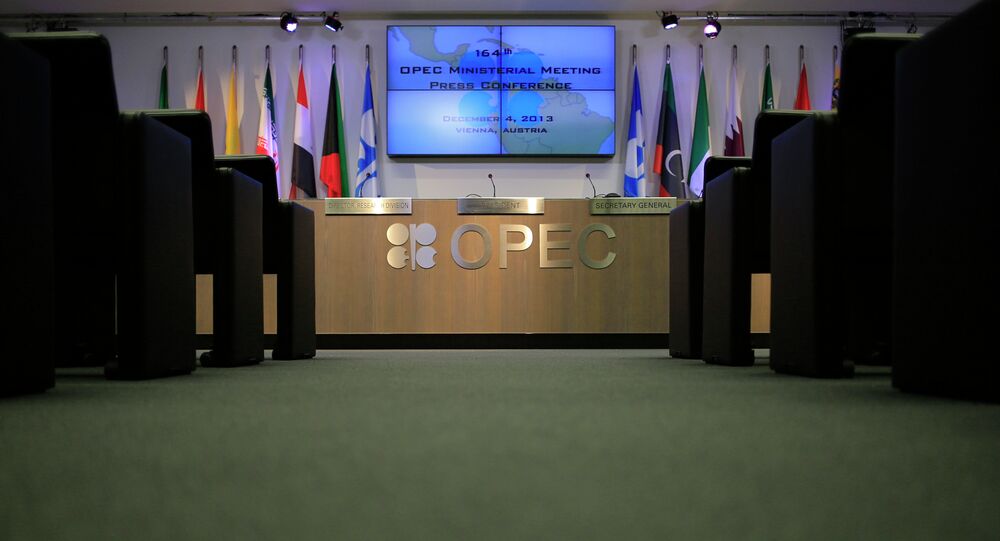 Oil prices are likely to fall after the Organization of Petroleum Exporting Countries (OPEC) summit in Vienna next week and then stabilize between around $35 to $45 per barrel, Trends Research Institute head Gerald Celente told Sputnik.

WASHINGTON (Sputnik) — Energy ministers of the once powerful oil cartel are set to meet in Vienna on June 2, less than two months after a failure of the April meeting with non-OPEC countries in Doha that sought to freeze oil output at January levels in a bid to shore up prices.

"We forecast oil prices to fluctuate in the mid-$30 to mid-$40 per barrel range for the rest of the year," Celente said on Friday. "However, should major geopolitical conflicts and civil disorder erupt among and/or within oil-rich nations, oil prices will of course spike higher."

With many oil rich nations getting poorer such as Nigeria, Venezuela, Libya, Iraq, Angola and Azerbaijan, the OPEC meeting in Vienna would be unable to shore up plunging global prices, Celente warned.

"We forecast that despite any possible pledges in Vienna to cut production, many will flood the market with whatever they can get away with considering the dire economic pressures and escalating domestic unrest confronting them."

Regardless of what will be agreed upon at the Vienna meeting, the fundamentals of the global economy, not OPEC, will ultimately determine the price of crude oil, Celente insisted.

However, "the recent spike in oil prices is a temporary production issue and not one of supply and demand," Celente cautioned.

Devastating forest fires in oil-sands-rich Alberta, Canada, disruptions in Venezuela, and pipeline and refinery attacks in Libya and Nigeria have taken some four million barrels per day off the markets, he pointed out.

Saudi Arabia was continuing to pump out enormous quantities of oil to defend its market share against rival producers like Iran and Venezuela, even though it was highly vulnerable to and suffering financially from the global slump in oil prices, Celente observed.

"It is strictly a bottom line issue, and the bottom line is that for the Saudi government to run a balanced budget, the fiscal break-even point is $100 a barrel."

"The point is, the Saudis will continue to produce more at a time when there is already an estimated 1.5 million barrels per day surplus on the market for the first half of this year," he emphasized.

Iran, which many analysts had predicted would not meet its output projections following the lifting of sanctions, has instead surpassed them, hitting 3.6 million barrels per day, Celente added.