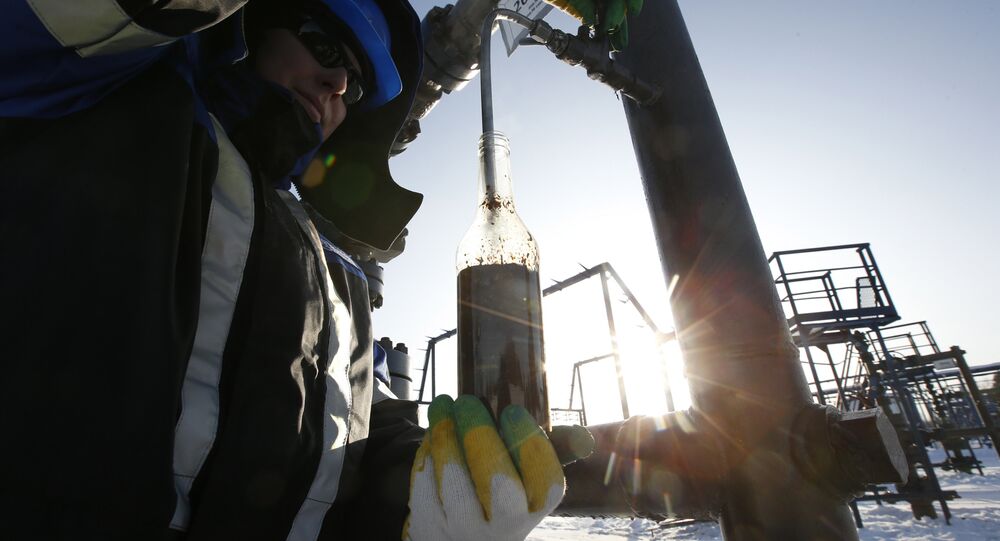 At least 17 major oil producing countries, both from the OPEC and non-cartel producers, are due to meet in Doha on Sunday to discuss freezing production at January levels to offset the glut in global oil and steady oil prices that have declined to a third of their peak level between 2014 and 2015.

MOSCOW (Sputnik) — In February, the energy ministers of Saudi Arabia, Qatar, Venezuela, and Russia agreed to strike a deal on freezing oil production at levels reached in January, 2016 if other countries followed suit. A number of oil producers, including OPEC members Ecuador, Algeria, Nigeria, Kuwait and the United Arab Emirates and non-OPEC member Oman, expressed interest in joining the potential deal early on.

More countries agreed to join later. On Wednesday, Russian Energy Minister Alexander Novak said that he had received preliminary information from Qatar about 17 countries participating in the meeting. The final list of participants is only known to Qatar, with most of OPEC members taking part, as well as Azerbaijan, Mexico, Kazakhstan and Oman having confirmed their attendance.

The Saudi Arabian position on the deal remains unclear. Saudi Arabia, which is one of the world's leading oil producers, previously stated that it would agree to freeze its output if Iran joins the Doha deal. Later, Russian and Saudi Arabian representatives reportedly reached consensus, with Saudi Arabia allegedly agreeing to make its final decision on freezing output without Iran's participation in the deal, partially backtracking on its original statements. On Saturday, the country's defense minister again backtracked and stated that Saudi Arabia would freeze output on condition that other major oil producers, including Iran, follow suit.

Saudi Arabia's neighbor Kuwait has been eager to reach the deal. On Saturday, Kuwaiti Finance Minister Anas Saleh said that he was optimistic about the results of the upcoming meeting.

© REUTERS / Yasin Bulbul/Presidential Palace
Iran Ready to Pump All the Oil and Gas That Turkey Needs
The United Arab Emirates (UAE), which is OPEC's fourth largest oil producer after Saudi Arabia, Iraq and Iran, said that the country was open to cooperating with other oil-producing countries to stabilize the global market.

Russia, which overtook Saudi Arabia in oil output in December, has been optimistic on the results of the meeting. Novak expressed hope for a successful conclusion of the talks, while Kremlin spokesman Dmitry Peskov stressed that the Doha deal can be reached even with Iran absent from the talks.

Participants of the upcoming meeting may establish a supervisory committee on the implementation of the possible agreement, a source in one of the delegations said Saturday.

© AFP 2021 / YASSER AL-ZAYYAT
Kuwait Optimistic About Doha Output Freeze Meeting’s Outcome
Several major producers turned down the participation in the negotiations. Norway, which is Western Europe's main oil producer, has rejected joining the talks, with its ministry failing to comment on its decision.

Libya may be the only OPEC member to turn down the deal as it seeks to rebuild its productive capacity following a multi-year conflict.

Iran, which previously voiced its intention to ramp up its daily production to four million barrels, declined taking part in the output freeze, while the country's OPEC executive board member Kazempour Ardebili will reportedly be present at the talks. Iran's oil ministry reportedly justified its position by the need to regain its share of the world's oil market.

Global oil prices plunged from $115 to less than $30 per barrel between June 2014 and January 2016, hitting their lowest levels since 2003 amid the ongoing glut in global oil supply.

© Sputnik / Maksim Blinov
Russia's Rosneft Interested in Oil, Gas Projects in Iran
News of the planned output freeze deal have been buoying oil prices since February. After hitting the lowest level of nearly $28 per barrel in late January, prices recovered to around $40 per barrel for the Brent crude benchmark, a level held steadily since early March.

Prices surged further in April, rising to the highest since November on Tuesday. Brent traded at over $44 per barrel following news of consensus between Moscow and Riyadh on freezing output.

On Friday, markets reacted badly to Iran's final decision to abstain from the deal. Brent again dipped below $44 per barrel, hovering at around $43 per barrel by late Saturday's trading.

While experts have been skeptical of the Doha deal's ability to stem the slump in oil prices, participants have set out limited aims for the output freeze in terms of immediate and medium-term impact on prices. Russia's Novak stated that the second quarter of 2016 may see an increase to $45 per barrel, while by the start of 2017 prices may average at $50 per barrel and climb as high as $60 per barrel.

© AFP 2021 / YASSER AL-ZAYYAT
Kuwait Optimistic About Doha Output Freeze Meeting’s Outcome
A part of skepticism directed at the Doha deal's ability to cut short the oil slump has been driven by ever higher production, with January's output, which have been proposed as the benchmark for the freeze, standing at record levels.

Effect of Oil Extraction Freeze Agreement to Be Limited