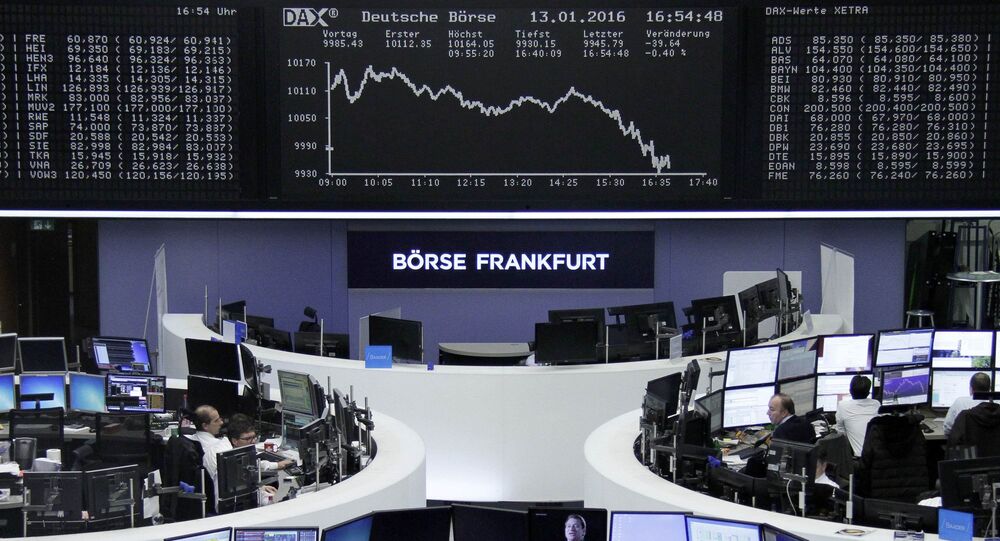 Amid international headwinds, a prolonged slide in commodities prices, and policy risks, economic sentiment in the Eurozone dropped to its lowest level since June, as weak inflation weighed on the bloc's growth outlook and the financial sector responded to the Brexit debate.

© AP Photo / Giannis Papanikos
Will the European Union Share the Fate of the Soviet Union?
Kristian Rouz — The euro-area economic confidence declined over the course of  February to its lowest level since last June amid less-than-expected inflation, overall economic sluggishness, and political risks, including Brexit concerns and Middle Eastern tensions. As investors seek safety in bonds and non-liquid assets like gold, the international markets' impact on the Eurozone's economic performance has skyrocketed due to a substantial lack of domestic investment. In such an environment, the European Central Bank (ECB) is facing louder voices calling for increased monetary stimulus, while Brussels is unable to initiate full-scale fiscal stimulus due to insufficient fiscal centralization.

On Friday, the Eurozone's index of executive and consumer sentiment dropped to 103.8 from 105.1 in January, according to a report by European Commission. This level is its lowest since June, when Grexit fears were ravaging the economic outlook on the common currency bloc. Previous forecasts for February were at 104.3.

© AFP 2021 / Leon Neal
Crazy Time: Four Things That Make Brexit Campaigning Weird
This time around, Brexit concerns and low inflation in January contributed to the decline in economic confidence. While commodities are cheap, any significant increases in the price index are unlikely, meaning the broader economy is losing momentum, while consumers opt to save rather than spend, and consumption is key driver to the Eurozone's economy. Global growth is slowing, and even Germany is slowly sliding towards factory-gate disinflation, although it is not quite there yet, something similar is happening in China. ECB President Mario Draghi is under pressure to add stimulus. However, as negative rates policy has been intact since late last year, further cuts in rates to support borrowing might dangerously destabilize the banking sector.

"It's a bad set of figures that reinforce the case for more stimulus," Michael Schubert of Frankfurt-based Commerzbank AG said. "It's not just concerns about inflation expectations, the risk is now that weakness begins to impact growth."

Consumer confidence, which was already in negative territory in January at minus 6.3, dropped further to minus 8.8 this month, and services sector business sentiment declined to 10.6 in February from 11.5 the previous month. This is an across-the-board slump in business and consumer confidence, as the German slowdown weighed on industrial production confidence, which has fallen as well, due to a lack of efficient demand overseas. Retail sector sentiment also slid due to disinflation prospects.

However, on the brighter side, in France, despite the decline in overall business confidence, manufacturing sentiment picked up in February after Q4 GDP growth was revised upward due to robust consumer spending in the holiday season.

"This is a good sign — there's a bit of spending in there and a bit of investment," Philippe Waechter of Paris-based Natixis Asset Management said. "Consumer spending was stronger in December and remained strong in January."

© AFP 2021 / Joel Saget
Even Weaker Euro Ahead as Eurozone Falters Just Above Disinflation
The French economy is less reliant on international trade than that of Germany or the UK, meaning the international headwinds and political concerns do not have such a great impact on France as they do on its closest neighbors.

Concerns about the financial sector potentially underperforming due to the Brexit debate undermining London's leading role in global finance, are the main short-to-medium-term risk to the Eurozone's economic prospects. In response to the emerging risks, the ECB, during its policy meeting on March 9-10, might increase its monthly volumes of bond-buying from the current level of 69 bln euros, or cut borrowing costs further into the negative, charging commercial banks more should they abstain from issuing loans. However, these measures would have greater spillovers than the current stimulus package does, meaning the ECB might consider negotiations with commercial banks regarding the increase of volumes of lending within the current policy framework.