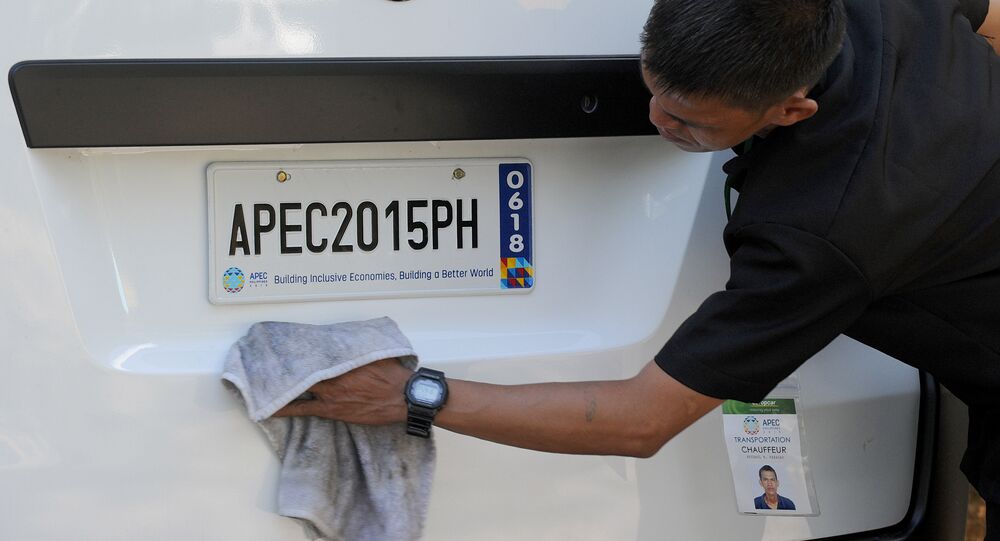 The Asia-Pacific region needs to find new ways to reboot its slow economic growth, the secretary general of an official observer to the Asia-Pacific Economic Cooperation (APEC) said Monday.

“APEC needs to urgently rethink growth strategies… There are many things region needs to do to further promote growth rate for the Asia-Pacific," Eduardo Pedrosa, Secretary General of The Pacific Economic Cooperation Council (PECC), told reporters on Monday.

Pedrosa, who noted APEC economic growth down from around 5 percent to 3.5 percent, cited China’s slowdown and failures to implement structural reforms as its main reasons. One of the ways to boost economic growth is removing trade barriers and promoting free trade agreements, he added.

© AFP 2021 / TED ALJIBE
Only 28% of Asia-Pacific CEOs Believe in Revenue Rise in 2015 - PwC Report
"Initiatives that can boost future growth is the TPP [Trans-Pacific Partnership]. It would provide around $2.2 trillion to global GDP," Pedrosa said.

Ceferino Rodolfo, assistant secretary at the Philippines Department of Trade and Industry, told Sputnik earlier the ongoing APEC will not address Manila's membership in the controversial TPP trade pact.

The final text of the TPP was released to the public earlier this month after it was signed in October by the United States, Brunei, Chile, New Zealand, Singapore, Australia, Canada, Japan, Malaysia, Mexico, Peru and Vietnam.