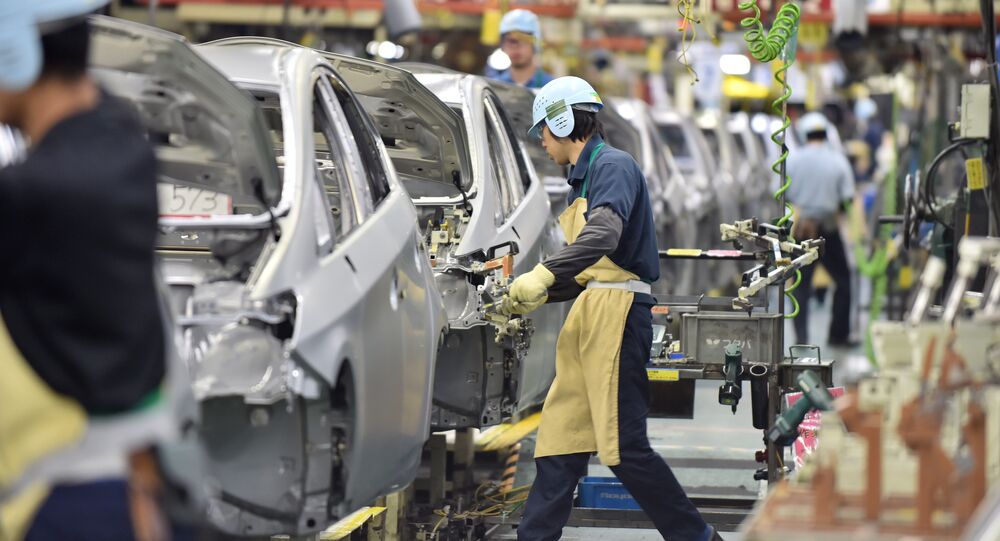 At Risk Again: Japan to Launch ‘Abenomics 2.0’ as Manufacturing Stumbles

© AFP 2021 / Yoshikazu TSUNO
IMF Urges Japan to ‘Reload’ Abenomics Policy to Help Sluggish Growth
Kristian Rouz – As Japan is entering a new era in its economic policies, dubbed 'Abenomics 2.0', the nation’s industrial output suddenly dropped in August from July, while retail sales remain weak due to the negligible expansion in prices. Japan’s Prime Minister Shinzo Abe is now aiming at boosting growth via improved corporate governance and aggressive fiscal policies after only a partial success of the previous rendition of ‘Abenomics’. However, repeating the 1980s fiscal-propelled growth model might be hazardous in the current circumstances as an increased burden of national debt might undermine the current ‘safe-haven’ status of many Japanese financial assets. The mixed bag of macroeconomic signals is stirring a massive debate over future Japanese economic policy.

Japanese manufacturing unexpectedly slid by 0.5% month-on-month in August, possibly signaling yet another period of contraction in the nation’s highly industrialized and export-driven economy. Previous estimates saw industrial output growing from between 1% to 2.8% after July’s fall of 0.8%. The economic recovery in Japan thus halted again, awaiting decisive measures from the authorities. Japan’s exposure to international headwinds is rather high due to its high involvement in international trade and dependence on imported commodities.

A decline in import prices, including foods and fuels, depressed Japan’s inflation, while a slowdown in mainland China, one of the biggest consumers of Japanese exports, and weak domestic consumption all weighed of Japan’s industrial production. To make things worse, investment capital is flowing into Japan’s safe-haven financial assets instead of the real economy, while large commodity stockpiles are still increasing due to falling prices, further depressing investment.

Japan’s PM Abe, elected in December 2012, has offered a plan of 'Abenomics 2.0', aimed at reviving growth and restructuring the nation’s economy to be more sustainable. His previous efforts, dubbed 'Abenomics', combined an unprecedented monetary stimulus, adjustable fiscal policy and administrative reform. Those measures were only a partial success, resulting in a weaker yen (and better exports performance), higher stock valuations (and investment appeal) and larger profits for the zaibatsu, the nation’s biggest industrial corporations. However, Abe has failed to provide stable economic growth, with the economy swinging between expansion (six quarters) and contraction (four quarters) under Abe’s cabinet.

Inflation (excluding food) in Japan had accelerated to a promising 3.5% in May 2014, slowing to 2.2% in March 2015 and then collapsing to 0.3% in April, venturing further into the red in July. The negative impact of the global slowdown requires new policy measures from the Japanese authorities.

Now, with macro data providing discouraging reading, Abe is putting forth a series of more decisive policy measures. The PM announced a plan that will boost the Japanese economy by 20% and stop the negative tendencies in the nation’s demographics. The new measures include improvements in corporate governance and aggressive fiscal stimulus.

“We are going to build a new system whereby CEOs and other board members should be transparently selected, and cross shareholding further dissolved," Abe said while in New York on Tuesday. "If external factors were to cause great confusion in the economy, we would deal with it by conducting fiscal action flexibly."

Cross shareholding is a common practice in Japan, where several corporations own each other’s stock in order to control certain industries and protect their shares of the market. A ‘lawful’ alternative to monopolization, the cross shareholding practice severely limits competition thus hindering economic expansion.

Another hotly debated issue is the efficiency of fiscal stimulus to Japan’s economy. In the 1980s, the nation’s economy expanded rapidly fueled by government subsidies, financed by immense external borrowing. The complications of this model resulted in a heavy debt burden and the next two decades being ‘lost’ to stagnation.

"Looking at the postwar fiscal management, the bubble era of the late 1980s in particular, spending needs to be curbed just when the economy is in good shape, in order to make a steady progress on fiscal consolidation," the Japanese Finance Ministry said in a report.

© REUTERS / Yuya Shino
Global Markets Slide as US Economy Stalls, Japan Holds on Stimulus
Japan’s economy grew an average 6.5% per year between 1986-1990, while budget spending rose by 3.3% each year. When the fiscal bubble burst in 1991, Japan’s economy halted, while the external debt stands at 231% of 2015's GDP. A similar debt-to-GDP ratio was posted by Japan in 1945 due to over-the-top military spending. That ratio was later curbed to 15% in 1950 via a period of hyperinflation, but that is hardly an option in the current circumstances as it would undermine Japan’s reputation as a financial safe haven.

Nonetheless, PM Abe seems determined to give a fiscal stimulus to the economy, which is based on stronger fundamentals than three years ago. The nation might even consider immigration in order to boost overall economic productivity, but not before women and the elderly will become more active economically, Abe reiterated.