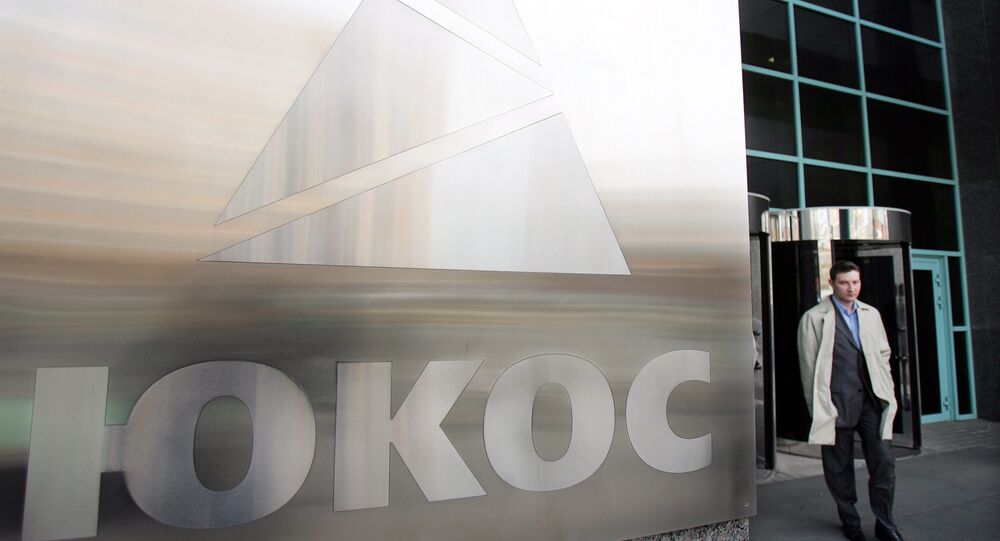 The Yukos case does not concern state companies such as Gazprom and Rosneft.

"Well yes we haven’t yet targeted the companies that are controlled by the state. We have solely targeted the assets that are directly owned by the Russian Federation,” Osborne said.

© Sputnik / Vladimir Vyatkin
Russia to Challenge State Property Arrest in Court Over Yukos Case
According to Osborne, the arrest of Russian state companies’ assets, including those of Gazprom and Rosneft, is an arduous process. It entails convincing the courts that Russia owns not only shares in the company, but that these companies are state agents, the Yukos lawyer said.

The GML head told Sputnik the company is mostly approaching banks that are believed to hold Russian accounts and "certain parcels" of real estate.

"We’re still looking at other assets and there’s nothing to stop us going back in France or in Belgium to take [something] or freezing orders if you like, and further assets in the future," he said.

Russian media assets in France will not be affected by the Yukos case while the seizure of assets in Belgium is under question, Tim Osborne said.

"I gather that certainly in Paris some of the television stations were working from the buildings that were actually owned by or leased by the Russian Federation so we don’t believe the television companies themselves were attacked, but only the buildings. I think in Brussels because again there’s a slightly different way of working, we have actually started at the bank accounts of the local Russian media operations,” Osborne said.

Simonyan disputed earlier reports that the agency’s property had been seized, explaining that Rossiya Segonya does not own buildings in Paris, but rents them from Russia’s state-owned real estate property manager abroad, Goszagransobstvennost.

© Sputnik / Grigory Sysoev
Russia's Rosneft Settles Longstanding Legal Dispute With Yukos
Russia has been given two months to file an appeal with the London High Court over the Yukos case, Tim Osborne added.

“Russia now has two months roughly until the end of August to file its opposition to our recognition application to the court in London,” Osborne said.

“We remain ready to speak to the Kremlin and to work out any commercial solutions to this problem, but until they show a willingness to talk to us there is nothing we can do except to go along with the enforcement,” Osborne said.

Osborne added that the Kremlin had been contacted on the issue.

"We’ve written to them, suggesting that we could together have a meeting and that we could resolve this, but the letter has so far been ignored," Osborne said.

The timing of the announcement of Russian assets frozen abroad over the Yukos shareholder case was not intended to coincide with the St. Petersburg International Economic Forum, or the announcement of the EU decision to extend anti-Russia sanctions, Tim Osborne told Sputnik.

"It just happened when it happened. There was no great plan to do it, to coincide with the St. Petersburg conference or with sanctions, or with anything else."

Energy company Yukos was declared bankrupt by Moscow's Court of Arbitration in 2006. Its former managers claim that Russian authorities illegally forced the company out of business in order to obtain its assets. In July 2014, a court in the Hague ordered Russia to pay $50 billion to former Yukos shareholders.

Also on Friday, Russian Foreign Minister Sergei Lavrov said that Moscow would give a symmetric response to the asset seizures.

On Saturday, Kremlin Chief of Staff Sergei Ivanov said Russia would respond to the seizure of its state assets abroad and that Moscow would take prompt retaliatory action.

On Sunday, Belgian Foreign Minister Didier Reynders said that all assets of the Russian Embassy in Belgium and the permanent missions to the European Union and NATO in Brussels would be unlocked at the beginning of the upcoming week.