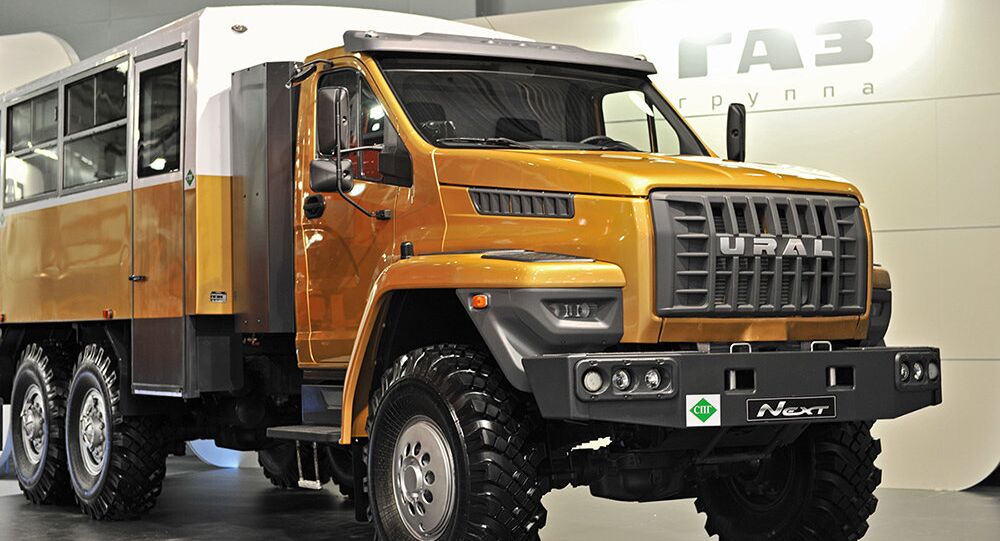 © Wikipedia / Vitaly V. Kuzmin
Russia’s First Unmanned Truck Ready for Driving Tests
Long known for reliability and adaptability to the poor road and 'no road' conditions prevalent in Russia's vast wilderness, the Ural Next aims to improve on its heritage by adding the latest in comfort and convenience features for both driver and passengers.

The new cabin design, conforming to the classic 'aggressive look' of its predecessors, was created with ergonomics, comfort and ease of operation in mind. The three seat cockpit is accessed via wide steps designed for easy entrance, and includes all the features one might expect in a contemporary truck design, including electronic windows, central locking, an improved glove box, modern LED lighting, heated mirrors, heated fuel fillers and intakes.

© Sputnik / Grigoriy Sisoev
GAZ Group presents its new designs at at the 2015 Construction Equipment and Technologies Exhibition.
gazgroup.ru
A drilling truck variant of the new Ural Next

Capable of climbing hills at angles up to 35 degrees with ease, the Ural Next also features an improved maximum permissible gross vehicle weight of 22.5 tons, with the maximum load on the front axle increased from 5.3 to 6.5 tons, while the chassis payload capacity has increased from 12 to 13 tons, all without reducing fuel efficiency, which has been improved.Not limited to cosmetic changes and new convenience elements, the new truck is built around a high-technology aggregate chassis, and features modernized axles, an improved motor design, a Wabco air breaking system, RBL steering gears, and vaunted new passive safety features.

© RIA Novosti . Vladimir Rodionov
AvtoVaz Set for 20% Increase in Production of Cars for Renault, Nissan
Designed by the GAZ Group's United Engineering Center, the new Ural's cabin is one of several modernization projects initiated by the company on its series of vans and trucks. The others include the GAZelle Next medium duty van, and the GAZon medium truck.

Production of the Ural Next is set to begin later this year.