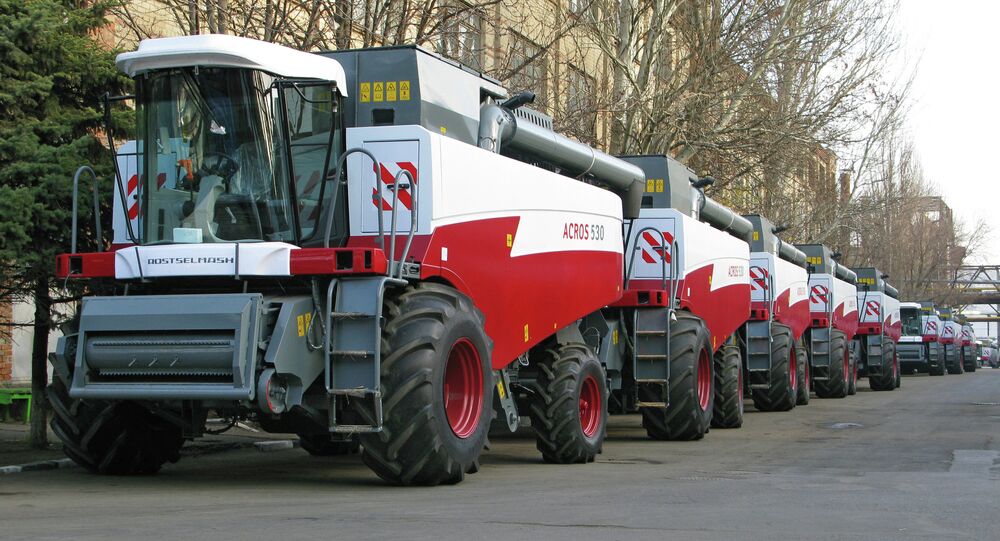 Rostselmash, among the world's largest agricultural equipment producers, has ambitious plans to increase its exports by 20 percent this year, noting that the devaluation of the ruble has increased the company's cost competitiveness.

© Sputnik / Kirill Kallinikov
Russia May Consider Easing Food Embargo for Hungary, Greece
Konstantin Babkin, the president of Rostselmash, the Rostov-on-Don based agricultural equipment firm, says that his company has plans to increase exports by 20 percent in 2015, largely due to the devaluation of the ruble.

"When it comes to exports we are facing a positive situation. I estimate that this year our exports will grow by 20 percent," Babkin said, speaking to RIA Novosti on Tuesday.

Babkin clarified that exports had accounted for 20 percent of the company's total production last year, with the main importers being the countries of the CIS and Eastern Europe.

The company president noted that the devaluation of the ruble has had a positive effect in strengthening the competitiveness of his company's products, both externally and internally. "The devaluation of the ruble is good for Russian producers because the share of foreign competitors in the market is decreasing, since their equipment has doubled in price. Accordingly, our cost competitiveness increases."

Babkin admitted that there were negative factors as well, including the high price of credit, duties on grain exports, and the lack of stability in the foreign exchange rate. "So far, the production plans for this year are on the same level as they were last year." Babkin clarified that this amounts to roughly 4,200 machines.

Babkin explained that in December individuals and companies "rushed to spend their rubles and bought a lot of harvesters," but that sales in the last two months have declined considerably. He remains hopeful, noting that dealers "are confident that new orders will rise in the spring."

Chinese Carmakers to Bring Homemade Electric Vehicles to Russia in 2015