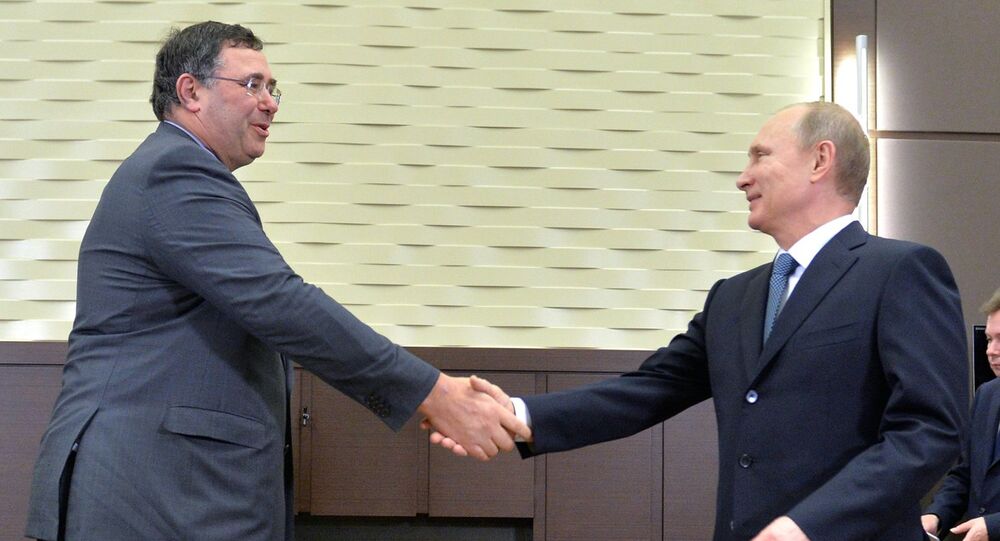 The former Total CEO, Christophe de Margerie, died when a Falcon 50 business jet crashed on October 20 at Moscow’s Vnukovo-3 Airport. The incident happened when the aircraft, which was to fly to Paris, hit a snow removal vehicle when taking off. The three crew members also died in the crash. De Margerie was the only passenger on board.

“We have large-scale projects with an actual continental character that can undoubtedly influence both European and global energy,” Putin said during a meeting in the southern Russian resort city of Sochi with Total’s new CEO Patrick Pouyanne.

The Russian president said that Total has been Russia's key partner for many years and expressed his condolences over the death of the former Total CEO, Christophe de Margerie. "This was a great loss," Putin said.

Earlier in November President Putin signed a decree on conferring the Order of Honor on Total CEO Christophe de Margerie for his significant contribution to Russian-French relations.

Oil prices, which plummeted even more when Organization of the Petroleum Exporting Countries (OPEC) decided to maintain its current supply of oil, may stabilize in mid-2015, Russian President Vladimir Putin said Friday.

"Winter will come, and I'm sure that [the prices] will be balanced by mid-2015," the Russian leader said at a meeting with the new chief of French energy giant Total.

At a meeting in Vienna on Thursday, OPEC members decided against reducing oil output to prop up prices amid excessive supply.

"We took part in the OPEC meeting. It was absolutely clear for us that the market will react to OPEC's announcement to maintain output," Putin said.

"None of the major energy producers insisted on taking some special measures to regulate the prices," the president said, adding that Russia was mostly satisfied with the current situation.

At the meeting, the 12-member organization decided to maintain the daily oil production ceiling of 30 million barrels, immediately causing the price of Brent crude to fall below the benchmark level of $75 per barrel. The decision was made amid a slump in oil prices on the global market. Over the past five months oil prices have fallen by about $40 per barrel.

French Total Has No Plans to End Cooperation With Russia’s Lukoil: CEO