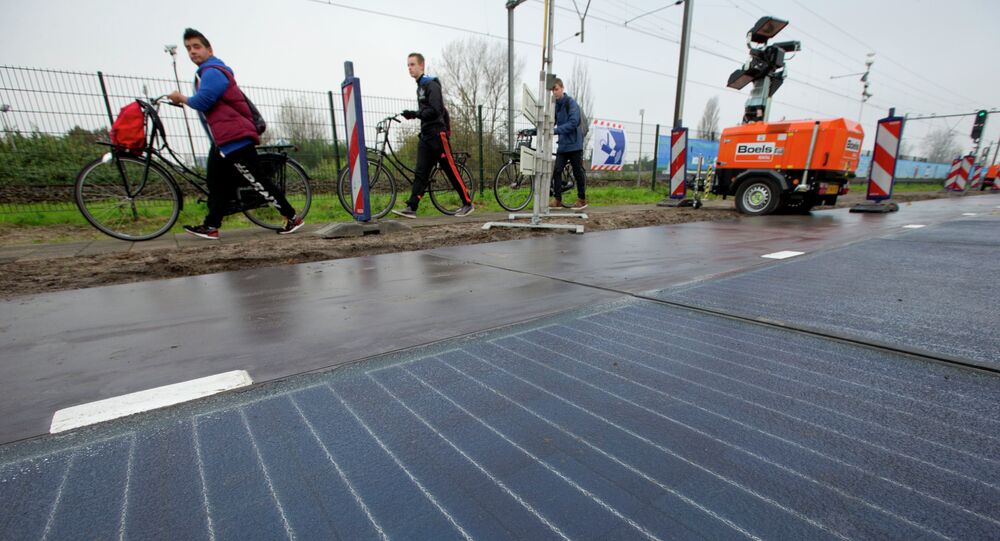 A Dutch town is home to the world’s first solar road, which will supply enough energy for up to three households annually.

MOSCOW, November 13 (Sputnik) — The world’s first solar road opened for traffic on Wednesday in a Dutch town close to Amsterdam, a test cycle route which aims to develop the technology for use on further transport routes.

“SolaRoad is a world first that will put the Netherlands on the map as a leader in sustainable innovation,” said Dutch Minister of Economic Affairs, Henk Kamp in a press release published by the SolaRoad consortium. Elisabeth Post of the North Holland Provincial Executive was also quoted as saying, “I am proud of our participation in the consortium and I’m looking forward to the future, which will see SolaRoad developing from a pilot into a fully-fledged product.”

The path itself consists of concrete slabs of 2.5 by 3.5 meters, on which there are crystalline silicon solar cells, topped with one centimeter of tempered glass whose texture grip for types. Its current 70 meter length  is to be expanded to 100 in the near future, and the project’s researchers expect that this test strip will generate approximately enough electricity to meet the annual needs of two or three households.

The cycle path was the brainchild of Dutch scientific research organization TNO, who joined forces with the Province of North Holland, Ooms Civiel and Imtech to form the consortium responsible for the project, which has cost €3.5 mln over five years of research and development. The local government was the main financier in the consortium with a €1.5 mln investment.

Sten De Wit, a physicist from TNO, told AFP at the road’s opening of the possibilities the initiative holds for the country: "The idea is that in the Netherlands we have approximately 140,000 kilometers of road which is much bigger than all the rooftops put together," said De Wit, adding that the country also boasts 25,000 kilometers of cycle path which can also be utilized.

SolaRoad claims that Denmark and Germany have expressed serious interest in the road, which is now going to be tested over a three-year period. The researchers are hoping their pilot strip will help them to further develop the technology, and aim to capture data such as the amount of energy it produces and the behavior of the road for users.