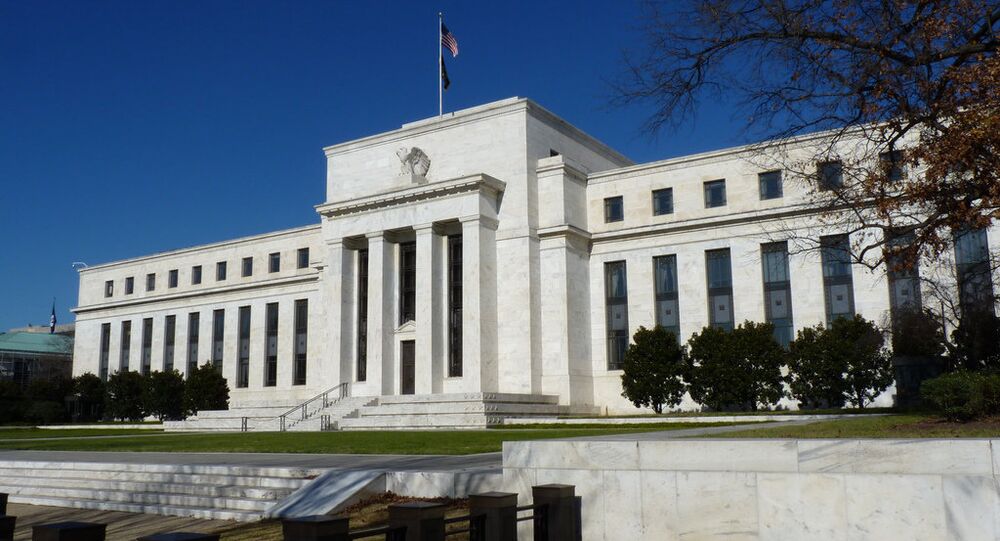 US Fed ended the QE after 6 years of unconventional monetary stimulus, triggering markets plunge on the expectations of interest rate hike.

MOSCOW, October 30 (RIA Novosti) — The US Federal Reserve announced Wednesday that it has ended the third round of its ‘quantitative easing’ (QE) programme after a roughly year-long gradual tapering, citing solid growth of the job market as the reason, however, interest rates will remain ultra-low until 2015 over fears the monetary tightening may damage economic growth.

Some of the concerns for the Committee were weak growth in the housing market, low inflation and falling energy prices. However, according to the Fed estimates, economic growth has been moderate and the labour market is expanding towards the Fed's target unemployment goal rate of 5.2-5.5% (now at 5.9%).

The markets are predicting a consequential interest rate rise in the future as the dollar rose against other currencies, bond yields slightly increased and commodities, including gold, slipped. However, the Fed said, the rise in interest rate will not happen until employment rate goals and 2% inflation are sustainable.

Some experts have pointed out that the Fed has over-optimistically neglected the recent volatility in the financial markets, underestimated the risks posed by low inflation and ignored weak growth in Europe. Regarding the inflation, the Fed said in a statement that "the likelihood of inflation running persistently below 2 percent has diminished somewhat since early this year.”

Narayana Kocherlakota, President of Federal Reserve Bank of Minneapolis noted the lower inflation expectation would mean a even longer period of ultra-low interest rates in order to support consumer demand, as reported by Reuters. Other experts went even further in their criticism of the QE effects.

“Effective demand is dead in the water,” Alan Greenspan, Fed chief in 1987-2006 said to the Wall Street Journal. ”I think that real pressure is going to occur not by the initiation by the Federal Reserve, but by the markets themselves.” In other words, the markets gradual adjustment to future interest rate hike will hit demand before the Feds action to raise interest.

"Recent episodes in which Fed officials hinted at a shift toward higher interest rates have unleashed significant volatility in markets, so there is no reason to suspect that the actual process of boosting rates would be any different, Mr. Greenspan said.

Further criticism of the unconventional monetary stimulus came from Republicans, who suggested the QE wrap-up is long overdue. “In both time and money, QE has overstayed its welcome by years and by trillions. Loose monetary policy before the crisis inflated the housing bubble and six years of QE may have just inflated the next bubble. More sustainable market-driven interest rates, an orderly unwinding of the Fed’s inflated balance sheet and a more predictable, rules-based monetary policy will help foster long term economy growth,” said in a statement House Financial Services Committee Chairman Jeb Hensarling, a Republican congressman from Texas, as reported by the HousingWire blog.

US GDP rose 3% year-on-year last quarter, according to Bloomberg estimates. In the previous three months the US economy expanded by 4.6%. Global oil prices slid 0.1% to $87 for a barrel of Brent. Commodities are falling as well, as markets expect shrinking demand due to the removal of the US monetary stimulus.

Federal Reserve System Revises Down US GDP Growth Projections for 2014, 2015