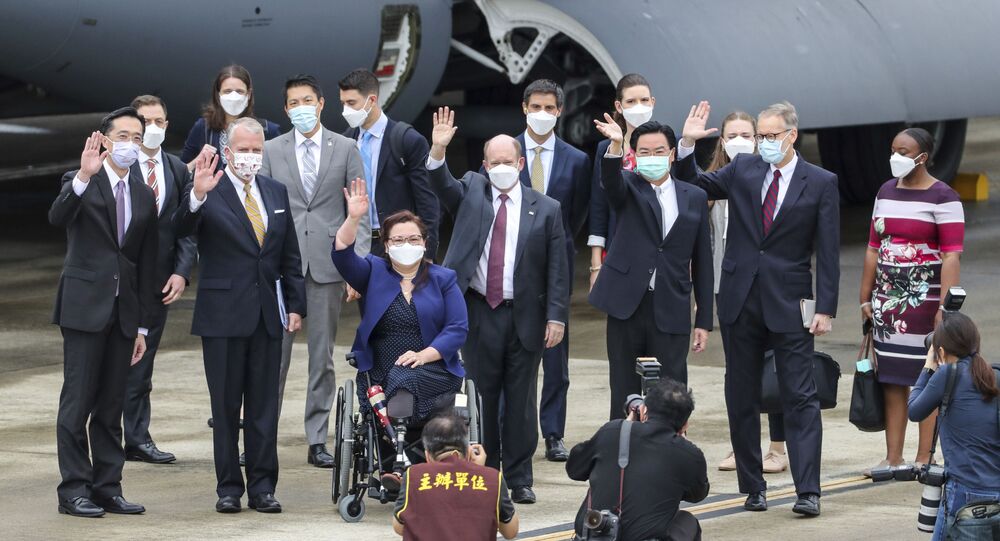 Taiwan, which is regarded by China as part of its territory, was visited on Sunday by a bipartisan group of American senators arriving on a US military plane. The lawmakers announced that they would donate 750,000 coronavirus vaccine doses to the island.

China's Defence Ministry on Tuesday blasted a visit by three US senators to the island of Taiwan as a "vile provocation.”

"We are resolutely opposed to it," the ministry said.

Three US senators, Democrats Tammy Duckworth Christopher Coons and Republican Dan Sullivan, visited Taiwan on Sunday as a part of a trip into the region. Their arrival sparked fury from Chinese officials and the public, as the bipartisan group pledged to donate 750,000 doses of COVID vaccine to Taiwan, which China considers part of its territory.

Beijing is resisting any attempts by foreign powers, particularly the US, to treat the island as an independent nation and maintain separate diplomatic relations with Taiwan.

On Monday, US Secretary of State Antony Blinken enraged Chinese officials even more when he said that a US trade deal with the island was in the making.

“I know we are engaged in conversations with Taiwan, or soon will be, on some kind of framework agreement," Blinken said during a congressional hearing in Washington. "And those conversations should be starting."

Any further details on these upcoming talks would be given by US Trade Representative Katherine Tai, Blinken added.

The secretary of state also signalled the White House's commitment to provide arms to the island so it would "have the means to defend itself.”

"We've continued to provide significant equipment and sales to Taiwan for that purpose. We have real concerns about the increased aggression that the government in Beijing has shown toward Taiwan," Blinken added.

In 1979, Washington officially recognised the People's Republic of China and severed diplomatic relations with Taiwan to embrace Beijing as the sole representative of China.

Years have passed and Washington still officially sticks to the “one-China” policy, with Taiwan seen as an integral part of China represented by the government in Beijing.

However, Washington continued its support for the island, including in arms supplies.